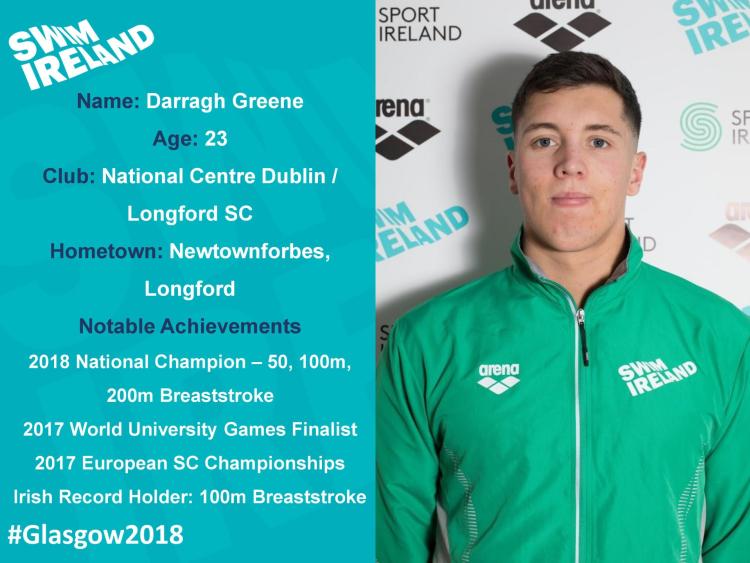 Longford history maker Darragh Greene will be back in the pool at the European Swimming Championships in Glasgow today (Sunday, August 5) for the 200m Breaststroke.

Longford history maker Darragh Greene will be back in the pool at the European Swimming Championships in Glasgow today (Sunday, August 5) for the 200m Breaststroke.

Darragh’s 100m swim sets him up nicely for a great 200m performance and with him currently ranked 14th, the possibility of another semi-final.

Darragh, from Newtownforbes, made Irish history in Friday evening’s 100m Breaststroke semi-final as he became the first swimmer to break the minute mark in the 100m Breaststroke in 59.92. His time was also a pre-validation for the 2019 World Championships in Gwangju, Korea.

A fifth-place finish in the second semi-final saw Greene tie for 8th place overall with Russia’s Kirill Prigoda, and a swim-off was then required to separate the two. Prigoda took the last place for the final in 59.39 with Greene settling as first reserve in 1:00.44.

National Performance Director Jon Rudd was happy with the positive start from the Irish team and singled Darragh out for special praise.

“We’ve all talked a great deal around the notion of Irish swimmers needing to perform on the day that matters – and in the case of 2018, we have finished the first of seven of those days. And we couldn’t really have stood up stronger or more determined than we did today. Five swims in the heats with four of them lifetime bests.

"Four Irish records and three swims giving us second bites in semi-finals. Two of the three were then faster than the heats and we have to applaud Darragh Greene becoming the first Irishman to break the minute for the long course 100m Breaststroke. If we continue in this vein, the week will be one to remember."