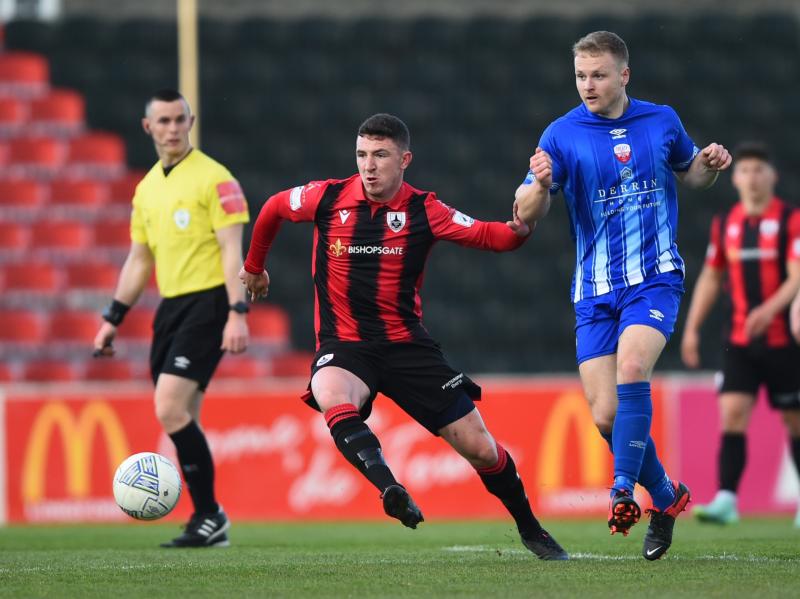 Aaron Robinson on the ball for Longford Town against Treaty United in the First Division clash at Bishopsgate on Saturday night last Photo: Ken Keenan

Longford Town extended their impressive unbeaten run in the SSE Airtricity League First Division to seven games in picking up a point in the scoreless draw against Limerick’s Treaty United at Bishopsgate on Saturday night last.

While the home side enjoyed the greater share of the possession, they were unable to find a way past the Treaty keeper Jack Brady who produced a magnificent save to stop a cracking long range shot from Shane Elworthy that looked destined for the roof of the net in the 30th minute.

Moments earlier the Town thought they had broken the deadlock through a glancing header from Sam Verdon but the goal was ruled out after the linesman flagged for offside.

A solicitor who attempted to get gardaí to drop a theft charge against one of two men involved in the alleged theft of a sports jersey was told in court last week: “You’re not at Mr Price here”.

Completely against the run of play, Treaty went close with a header from Enda Curran in the 35th minute and soon after the same player should have scored with only Luke Dennison to beat but the Town keeper produced a fine point-blank save.

Curran had a close range shot blocked in the 56th minute in another let-off for Longford who then piled on the pressure in search of the winner but it failed to materialise.

While Jack Brady spilled the ball after a strike from distance by Aaron Robinson, the opportunity to score was squandered by Verdon whose effort from the rebound was blocked by the relieved Treaty United keeper in the 59th minute.

Some other chances were created by the home side with a header from Verdon just off target in the 69th minute while Robinson shot over the bar in the 80th minute.

Treaty United had one last chance to snatch the victory in the second minute of stoppage time but were denied by Dennison who produced a vital save at the foot of the post to keep out a free-kick from Marc Ludden.

Longford’s next league fixture is against the leaders Cork City at Turners Cross this Friday night, followed by another tough away game against second placed Galway United on the May Bank Holiday Monday.