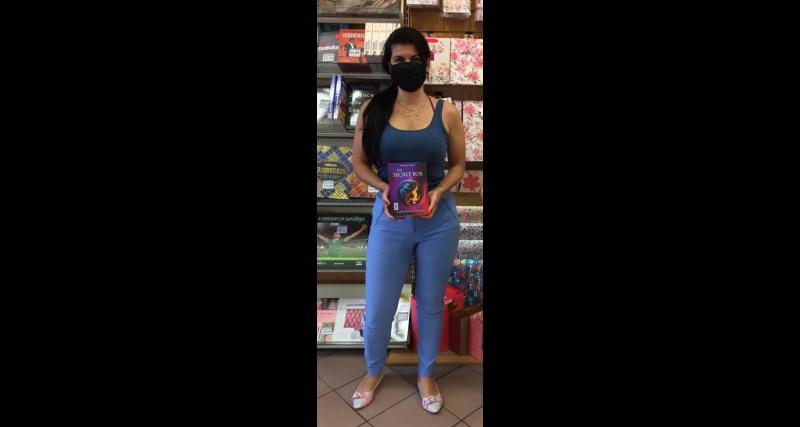 Michelle Hadad proudly holds a copy of her new book which is available to purchase on Amazon, in Donlon's Newsagents in Longford town or through Michelle's own website www.michellehadad.com

‘Nothing is permanent, just like our obstacles, losses and difficulties’.

The finished product is arguably one of the most uniquely compiled publications to hit the shelves in recent times, featuring two contrasting narratives that deal with suicide.

"The Secret Box II - Concave & Convex" shows that, regardless of pain, there is always hope and how important communication is when someone is suffering periods of great distress,” said Michelle.

“Suicide is a kind of obsession that takes over the person's soul until it reaches an unbearable point. It is as if "invisible enemies" were invading the thoughts of those who intend to kill themselves.

“This desire takes shape and strengthens until the act, previously unthinkable, takes place. However, the suicidal person does not want to end his life. He wants to end the pain that suffocates him inside.”

Brazilian by birth, Michelle is no stranger to the county. In 2012, Michelle opened her own clinic to help people with relationships issues, low self-esteem and suicidal tendencies after acquiring a diploma in psychology.

A Neuro Linguistic Programming (NLP) practitioner, life and business coach for several years, the self-starting entrepreneur has steadily carved out a reputation as being one of the region’s fastest emerging authors.

Now based in Kerry, in 2017, she took the wraps off her first book, 'The Secret Box - Finding the Key', a self-help guide aimed towards allowing readers unlock the secrets of a life fully lived.

Michelle’s second offering from under ‘The Secret Box’ brand is designed to show that regardless of pain, there is always hope and how important communication is when someone is suffering periods of great distress.

The book also reports the appearance of a new woman, who has evolved into a mature human being, sure of herself, and deals with subjects such as spirituality and forgiveness.

"To my NLP - Psychology and coach therapy’s clients in Longford- Ultimate Wellbeing for the opportunity to share stories and experiences, through which, in some way, I saved lives!

“I am grateful to you all for having trusted me and for giving me the opportunity to have learned so many lessons in life from each one of you,” said Michelle.

As books on personal care and self development go, ‘The Secret Box II: Concave & Convex’ ticks every conceivable box asked of it and more.

The book is available to purchase on Amazon
https://amzn.eu/3icHjZM, also, Donlons Newsagents in Longford or through Michelle's website @ www.michellehadad.com

Down Memory Lane | A gallery of glamour, glitz and style from the 2012 Longford Hunt Ball