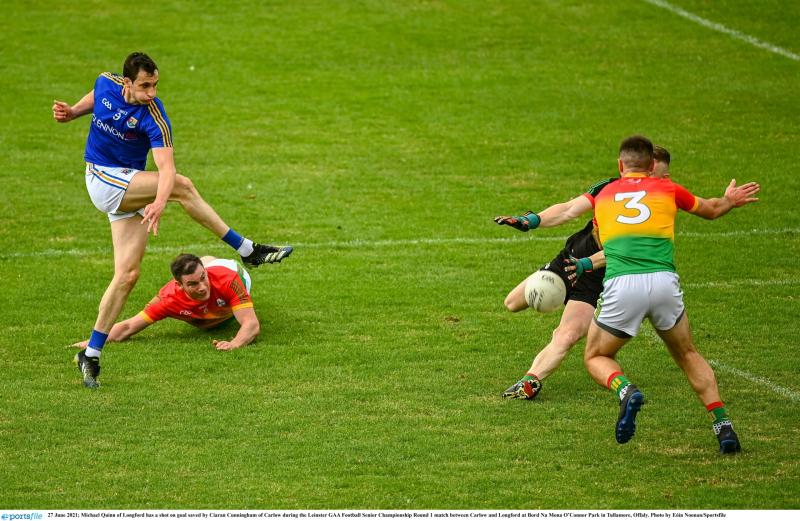 Longford advanced to a Leinster quarter-final meeting with Meath next Sunday after they defeated a dogged Carlow side in Bord na Móna O’Connor Park this afternoon.

In the end the margin of victory was six points; that could’ve been more but it could’ve went to other way as both teams were denied several goal chances by the opposition keeper.

Longford keeper Paddy Collum, in particular, pulled off two superb saves in the second half to keep his goal intact.

The rampant Longford hurlers produced a magnificent display to hammer the reigning champions Louth in their opening game in the Lory Meagher Cup at Glennon Brothers Pearse Park on Saturday.

Crucial Kildare goals knock Longford U-17s out of the championship

Goals at crucial stages of the game proved decisive as Kildare knocked Longford out of the Leinster Minor (U-17) Football Championship.

Darren Gallagher once again proved why he’s one of the best midfielders around with a an excellent display while in the forward line Robbie Smyth and Rian Brady scored five points apiece.

Early points were traded between Kevin Diffley and Darragh Foley (free) before Longford took a hold of the game with Gallagher involved in a lot of their scores.

Gallagher’s kick pass to Mickey Quinn restored their lead in the seventh minute and two minutes later the Granard man got on the scoresheet, pointing over a free after Robbie Smyth was fouled.

In the 10th minute Gallagher brought a save out of Carlow keeper Ciaran Cunningham. Rian Brady then kicked over a neat point to put three between the sides.

Gallagher was denied again by Cunningham in the 16th minute. Foley hit over another free before Sean Gannon’s goalbound shot was blocked by Andrew Farrell.

Longford then kicked four points in a row; Robbie Smyth with two, Rian Brady and a Gallagher free. Carlow just couldn’t gain possession and got their third point in the 25th minute; another Foley free.

Once again Longford replied with four unanswered points; Gallagher (free), Dessie Reynolds, Smyth and Donie McElligott all on the mark. Carlow’s first point from play came in the 32nd minute through Colm Hulton.

Rian Brady got a third point in stoppage time with Carlow firing over two more points as Longford led 0-13 to 0-06 at the break.

The lead was just four in the 39th minute as Carlow kicked over three points in the opening stages of the second half; Paddy Collum did very well from a tight angle to push Paul Broderick’s effort over for a point when a goal was on.

Longford hit back with points from Reynolds, McGivney and Brady but they couldn’t shrug off Carlow. In the 48th minute Conor Crowley scored a goal to bring them to within five of Longford. Joseph Hagan scored two while Smyth and Brady got one apiece to put Longford ahead by nine in the 56th minute.

There was drama in the final 10 minutes as first Collum brought off a great save to deny Chris Blake but Darragh Foley was to get a second goal for Carlow in the 69th minute with an excellent strike.

Longford finished the game with a point from debutant Dylan Farrell after Cunningham had saved Liam Connerton’s effort with his feet. Both sides ended with 14 as Kevin Diffley and Mikey Bambrick received black cards in stoppage time.