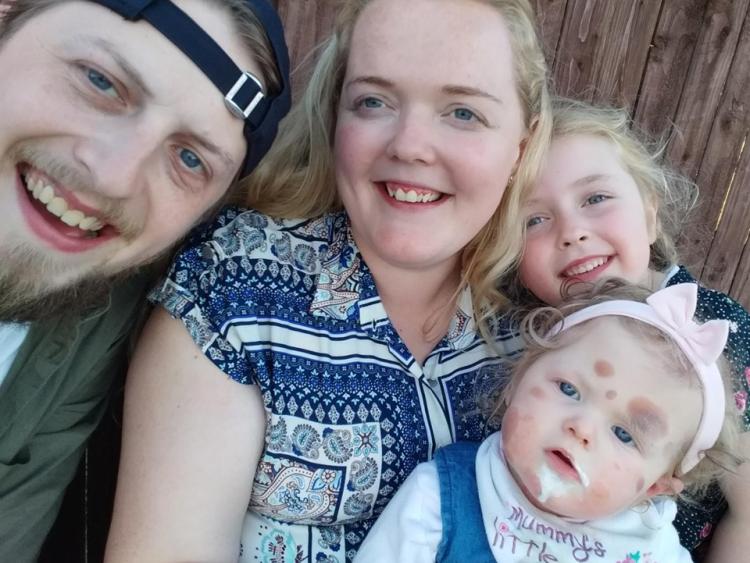 A year ago Tipperary couple Sabrina and Robbie Creamer were looking forward to the birth of their second child.

Their wish was granted on August 8 when Eve, the name was chosen because of a family love for the BellX1 song, was born.

Also read: Save our jobs: Hundreds turn out for Bord na Móna protest in Lanesboro

There was great joy but also heartbreak as Eve was born with a very rare skin condition called Congenital Melanocytic Naivi (CMN). This rare gene mutation meant more than half her body was covered in moles and birthmarks and six days later tests showed that this condition was also on her brain and spine.

Sabrina, a nurse at Limerick hospital and Robbie, a barber at the family business in Tipperary Town, feared the worst and after surgeries and further tests were told that Eve's condition was cancerous.

Since Eve was born the family has been supported by a charity called caringmatters now (click here to donate ) , a charity dedicated to people affected by CMN.

They cover some of the family expenses incurred while travelling to Dublin from their home at Knockane near Emly. In January of this year the family travelled to Great Ormond Street Children's Hospital in London to meet a world leading specialist in CMN, Dr Veronia Kinsler who is leading important research into the cure for this condition and caringmatters now funds much of this research.

A community aware of the plight of the Creamer family are holding fundraising events and making donations.

"It has been a roller coaster of a year. Robbie and I would never want anyone to go through what Eve is going through, no parents should ever be sat down and given the news that we were, so we hope the cure comes sooner than later. Our family , friends and the community have been absolutely brilliant to fundraise and any donation and support in any way is greatly appreciated," said Sabrina.

"The future is unknown and very scary for us right now but through all this we feel it is so important to raise awareness about Eve's condition. It is not genetic, there was no reason why it happened it's just a freak thing that can happen during development in the womb. If it can happen to us it can happen to anyone.

“We are also trying our best to keep things as normal as possible for as long as possible for Eve's big sister Ayryn who absolutely adores her much longed for little sister” said Sabrina.

After a perfectly normal pregnancy, Eve was born on August 8, 2018.

"When Eve was born we could see the marks on her face, it was a shock but she was breathing and her heart was fine," said Sabrina.

Eve was born with a very rare skin condition called Congenital Melanocytic Naevi (CMN). An MRI at 6 days old showed that this abnormal skin was also on her brain and spine.

"We were told it may or may not effect her development. We were in shock. We took her home and looked after her as best we could, she is a very good baby . At 10 weeks she developed epilepsy and was found to have hydrocephalus so was rushed to Temple Street for surgery to insert a shunt.

“Eve recovered well and we took her home and managed the epilepsy as best we could. At three months, in November, Eve's specialist informed us that her condition was far more serious than we thought, she told us the abnormal skin on her brain and spine would likely be cancerous and would be very difficult to treat.

“There was a tiny outside chance that it would be benign so we clung onto that hope. Further surgery took place in Temple Street in February this year to get a biopsy from her spine. We had to wait seven weeks for the results, it was a nightmare, our life came to a standstill. After seven agonising weeks of waiting we finally had our result, Eve had cancer. We were devastated. It was every parent's nightmare," said Sabrina.

"They recommended that Eve start on an oral chemo drug to slow down progression, it is not a cure, there is no cure. We started on that which we administer at home, it is not without its side effects but we manage it all as best we can and take things day to day."

The hope was that Eve could tolerate the drug but she developed a rash from the drug and it was decided that she should take a break from the drug during which time Eve became irritable and became agitated. Eve was hospitalised in Dublin again and a CT scan showed there was swelling on the brain and that the shunt was not working and the valve was replaced in Temple Street.

Eve is just back home from that operation and the family are waiting for the all clear to put her back on the oral chemo drug to slow down the progression of the CMN.

Sabrina said that since the family went public and decided to encourage people to support caring matters the support was been unbelievable.

"We have been getting calls from all over the world from people with their own kids with the same condition, Our own families,friends neighbours and community have been fantastic to us” said Sabrina.

“Eve is our warrior, every moment, every day is precious” said Sabrina.