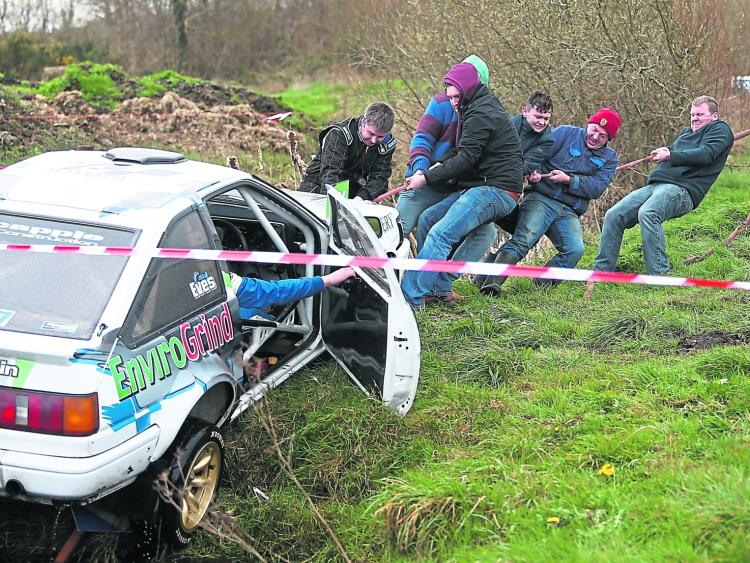 All together now...pull hard: Corey Eves and Adrian Reynolds of Donegal, receive help from local spectators to pull their car out from a ditch Picture: Syl Healy

Monaghan’s Josh Moffett and his Wexford co-driver Andy Hayes took a start to finish victory in the Admore Air Conditioning Corp Midland Moto Rally, the second round of the Triton Showers National Rally Championship based at the Longford Arms Hotel.

The nine-stage rally was organised by the Midland Motor Club and Moffett/Hayes finished a minute and twelve seconds ahead of former champions Roy White and his co-driver James O’Brien, also in a Ford Fiesta WRC.

Warrenpoint’s Peadar Hurson and his Monaghan co-driver Damien Connolly were 48.9 seconds further behind in third. Killoe native and New York based Paul Rowley and his co-driver Darragh Mullen were having an untroubled run and were 13th overall heading into the ninth and final stage, however, as they traversed the stage they slid off the road with the Fiesta ending up on its side.

Elsewhere, Packie Duffy finished second in Class 3, while Stephen Healy/Enda Fallon finished 92nd overall. Moffett was quickest on the opening stage by 1.4 seconds with Boyle next and a tremendous drive by Wexford’s James Stafford, saw him occupy third.

The Fiesta WRC’s of Roy White and Peadar Hurson were next with Clare’s Padraig Egan completing the top six. Punching in the best time on the second stage, Moffett extended his lead over Boyle to 5.1 seconds as White slotted into third, 14.6 seconds adrift of second place and eight seconds ahead of Stafford.

On the third stage, Moffett was only a tenth of a second better than Boyle and arrived at the Longford service 5.2 seconds ahead of the Donegal driver. Boyle was the first major casualty when he retired on the fourth stage as his Fiesta WRC clipped a bale, spun and collided with another bale, resulting in damage to his front wheel.

Moffett then arrived at the final service with a lead of a minute and one second. He went onto claim his second victory in as many rounds and also netted the additional Triton point for posting the fastest time on the Power Stage.

White was second and Hurson made a fine recovery to secure third. Stafford won the two-wheel drive category and Devine won the Motorsport Safety Team Group N category - 19.1 seconds ahead of Monaghan’s Shane Maguire. Garry Jennings, Niall Maguire and Gary Kiernan were amongst the non-starters.