Longford will be trucking for charity 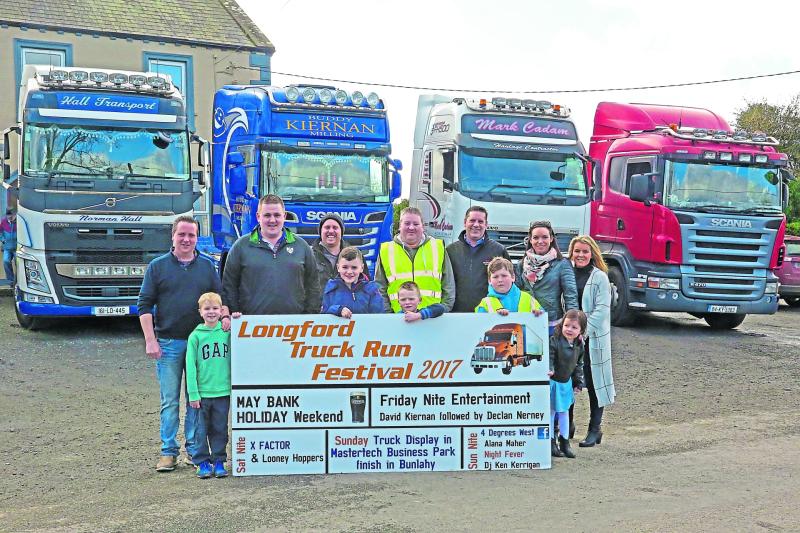 Truck enthusiasts across the county and beyond are in for a treat later this month as Longford’s Finest Truck Run Festival Weekend comes to town.

The May Bank Holiday weekend (April 28 to 30) promises to be a great one, which will see a variety of trucks, entertainment and events take place over the course of three days.

“On Friday April 28, we have David Kiernan, Declan Nerney and we’ll have a DJ after that,” said one of the organisers, Norman Hall, of the kick-off event in Creegan’s Bar, Bunlahy.

“Then on Saturday, we’ll have the X Factor. That’s new, so I don’t know how that’ll go, but it’ll probably go well,” he said, adding that this will also take place in Creegan’s.

“We’ll have four judges, and roughly between 10 and 12 acts and they’ll have to sing their way to the final and the best singer wins €500. That’ll be a seated venue. Then we’ll have the Looney Hoppers.”

The main event, though, is on Sunday April 30, when a large number of trucks will arrive at Mastertech Business Park, Longford at approximately 12pm.

The trucks will line up in the carpark and there will be a number of entertaining competitions, according to Norman, who is an avid truck fan and owns “about 30 trucks” himself.

“We’ll have the reversing competition with a prize of €500. And another one will be to see which truck driver is the fastest to drop a trailer and pick up a trailer. And the prize for that is €250,” he said.

The trucks will be leaving Mastertech around 3.30pm and going via Longford to Edgeworthstown and back to Bunlahy, where they’ll line up in the carpark outside Creegan’s pub.

There will be more live entertainment on the night, including DJ Ken and Nite Fever.

The weekend promises something for all the family, and will provide plenty of opportunities for attendees to donate to charity.

This year’s Truck Run will be run in aid of three very worthy charities: the Make a Wish Foundation; Tom’s Walking Wish; and Longford Women’s Link.

Everyone is welcome to join in the festivities from Friday April 28 to Sunday April 30.