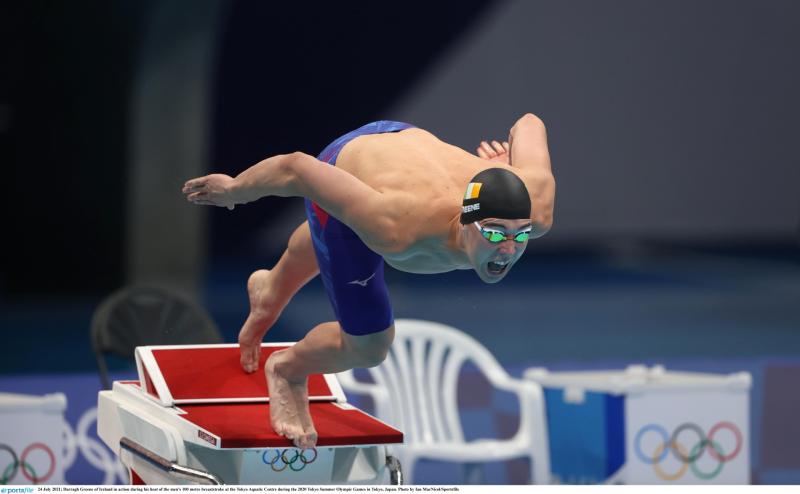 Longford's Darragh Greene unfortunately missed out in his bid to qualify for the semi-finals of the Men's 100m Breaststroke at the Tokyo Olympics this afternoon.

In an ultra competitive Heat 4 (there were seven heats in total), the Newtownforbes swimmer found himself in Lane 2 and he produced a very solid swim.

At the halfway stage of the race Darragh was positioned in 4th place with a time of 28.36.

Over the closing 50 metres, #TeamIreland Olympics Games debutant Darragh dug deep and managed to power his way into third place at one stage, giving Longfordians glued to their TV screens plenty of reason to cheer on their local hero.

Coincidentally, going into the Games Darragh was ranked 29th in world in Men's 100m Breaststroke and with all heats completed, his time was 29th fastest.

The fastest 16 in the heats go through to the semi-finals.

Team Ireland will be big in Japan: August 24 to September 5

Longford swimmer Patrick Flanagan has been selected to represent Ireland at the Tokyo 2020 Paralympic Games (August 24 to September 5) with the team announcement taking place at Abbotstown in Dublin this Thursday.

Darragh will swim at 12.32pm in the 100m Breaststroke heats this Saturday

As a youngster, growing up in Newtownforbes, Darragh Greene never thought that one day he’d be an Olympian. However, the multiple national record holder swimming ace will achieve the incredible feat at the rescheduled 2020 Tokyo Olympic Games.