Darragh will swim at 12.32pm in the 100m Breaststroke heats this Saturday 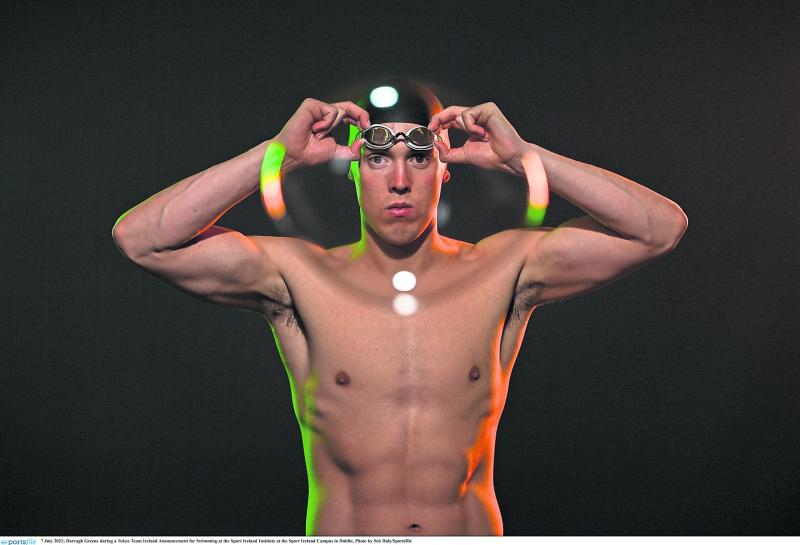 The time has come for Longford swimming star Darragh Greene to make his first appearance in the Olympics Photo: Seb Daly/Sportsfile

As a youngster, growing up in Newtownforbes, Darragh Greene never thought that one day he’d be an Olympian. However, the multiple national record holder swimming ace will achieve the incredible feat at the rescheduled 2020 Tokyo Olympic Games.

“Even to think that you are going to be an Olympian is a big confidence booster. It is a dream come true,” beamed 25-year-old Darragh.

Nine Irish swimmers are set to compete across fourteen events, becoming the largest swim team that Ireland has ever fielded in an Olympic Games. The swimmers will be in action in the newly built Tokyo Aquatics Centre from Saturday, July 24 to  Sunday,  August 1.

The strength and depth of Irish swimming has been on display over the past number of years, culminating this year with the ultimate qualification of six swimmers who have achieved the FINA A time across their events, with many more coming agonisingly close to the required standard to compete for Team Ireland in Tokyo 2020.

Speaking ahead of his first Olympic Games, Darragh said, “The Olympics have been something that I have dreamt about for a long time, and it is a real honour to be officially selected to compete for Team Ireland in Tokyo. It has taken a lot of work to get to here, and to be surrounded by a strong team of swimmers makes it all the more special. The standard of racing in Ireland is so high across the board, and  it’s great to be finally saying that we are going to Tokyo!”

In an interview with the ‘Leader’ earlier this year, Darragh said he was overwhelmed by the local reaction and extremely grateful for the many messages of support he received.

“It is one of those good news stories that people need or want to hear. I know some people don’t really see the light at the end of the Covid tunnel but this is something to look forward to. The Olympics is one of the biggest sporting events in the world.”

Son of Brian and Ann, his sister Aisling has played gaelic football for the county and his younger brother Rían is into basketball. “I definitely come from a competitive family,” Darragh smiled. Brian lined out as goalkeeper with Longford Town FC and the county senior football team.

Darragh said previously it was mum Ann, originally from Ardagh, that put all three children “into swimming lessons, in Longford Swimming Club, to get us water safe when we were young.”

So were the Olympic Games ever on the radar of a 10-year-old Darragh when he was growing up? “Not a chance,” he gasps.

He continues, “It is only in the last five years that I started to gain focus on the Olympics. When you are at a high performance level you really have to invest yourself, physically and mentally, into training every day. You can’t have a ‘what if’ or ‘if that’ frame of mind.

“It was a collective of people along my journey that helped me get to where I am now. The people you meet along the way that have had a positive impact. I think the big game changer was when I met with my coach Ben Higson who is a very accomplished swim coach. He has coached world class breaststrokers. He made the thought into a possibility and it was up to myself then to be able to grab the opportunity with both hands and deliver.”

Darragh is immensely proud of his association with Longford Swimming Club. “I swam with Longford SC for much of my career. When I joined, it was a competitive group, there was a serious standard. I won two Community Games national gold medals for Longford.”

He says his first coach Liam Deely gave him a great start and in his early teens it was Mel Magan and Carmel Leahy who were his coaches, before he linked up Ronan McNevin and Barry Hall when he was in Transition Year at St Mel’s College and began taking his swimming ‘more seriously’ and managed to secure a scholarship to UCD.

He has fond memories of his time at St Mel’s and also at Scoil Mhuire, Newtownforbes. “I remember representing Scoil Mhuire in the All-Ireland swimming relays, on a team alongside Matthew Valentine, Darren McLoughlin and Ciaran Madden.”

Darragh was Ireland’s first swimmer to go inside the Tokyo 2020 Olympic Qualification time at the FINA World Championships, setting a new Irish 100m breaststroke record of 59.82 in the heats of the 100m Breaststroke in Gwangju, South Korea.

Darragh reflected, “It was very bitter sweet. I got the time and the Irish record but was placed 17th overall so I just missed out on the semi-finals. It was the first time in history that a sub-60 didn’t make it to the semi-finals and that shows the depth and high standard in breaststroke now.”

During the first lockdown last March, Darragh was at home and he ended up ‘doing everything and anything, whether that was zoom circuits, runs and gym work’. He says he was fortunate enough to get some gym equipment from Coral Longford Leisure Centre, for whom he is an Ambassador and he thanked manager James O’Brien and Barry Hall.  He also expressed thanks to Senator Micheál Carrigy for helping set up the athlete’s grant, Longford County Council, Longford Sports Partnership and Kevin & John O’Reilly of O’Reilly and Sons Volkswagen for their support.

Has Darragh any advice for youngsters hoping to emulate him? “Be patient and have fun. At the end of the day, the last thing to do is to forget to have fun. You have to remind yourself why you are doing it... you are enjoying it. And then whatever happens, happens.”