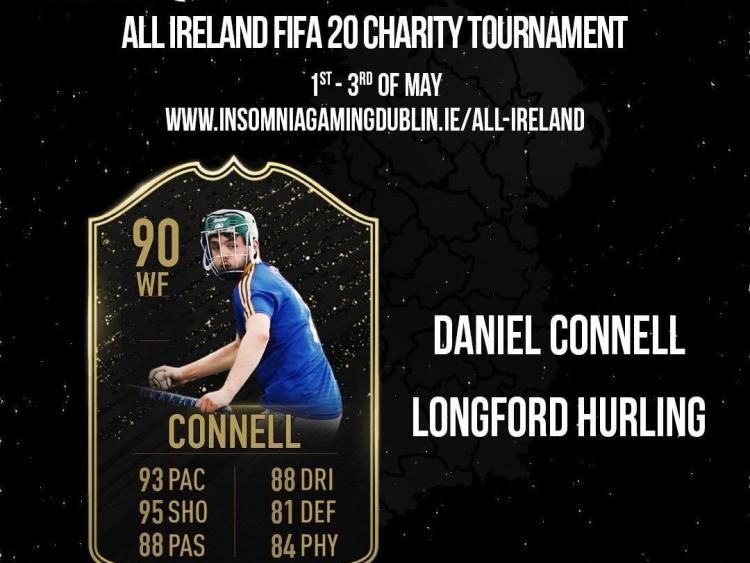 Daniel will play Louth's Gavin Kerrigan, who will be in the colours of Bayern Munich in the first round.

The winner of that first round contest faces Eric Kileen (Laois) in the quarter-final. Eric's team is Manchester City.

Daniel has teamed up with disability rights activist Joanne O’ Riordan  and inter-county players from all over the country   to support the heroic efforts of frontline workers during the COVID-19 crisis.

Glad to have him on board! Should be a great tournament... maybe Longford will go all the way https://t.co/540KxQKFY3

Players from all 32 counties are taking part in the first of its kind All-Ireland FIFA20 Charity Online Tournament which will take place across the May Bank Holiday weekend.

All money raised will go frontline workers in the HSE and NHS across the island.

Disability Rights Activist and Irish Times Columnist Joanne O’ Riordan, the Gaelic Player Association (GPA) and Insomnia Dublin Gaming Festival have joined forces to organise the online tournament which will be streamed live from Friday, May 1.

Details of the streaming can be found here: www.insomniagamingdublin.ie/ all-ireland

The competition was the brainchild of Joanne O’Riordan. On the launch of the tournament she commented; “I came up with the initial idea because my grandmother and uncle are both in care settings. I know they are receiving excellent care, but I also know they are missing not seeing us. The tournament is a chance for us all to remember collectively those in care settings and the people who are looking after them in this trying time. They are somebody’s mother, father, sister, brother, cousin, aunt, uncle, grandmother, grandfather, friend, or neighbour. This is our small way of showing that we care.”

O’ Riordan goes on to say that; “We want to create an event for people of all ages. We want them to watch the games, enjoy the sport of it and be part of the experience. We want to play our part in promoting and engaging with the terrific community spirit that has been evident during these challenging times. I like many others out there have been in isolation since early March. I miss my friends, I miss the craic attending matches and working in a public setting, but I also miss my nan, who is being cared for in Millstreet Community Hospital. I am encouraging everyone to get involved, and I hope we can reach or exceed our target. If everyone could give a little that would amount to a lot.”

The competition pits inter-county players  against each other, allowing them to release some of their competitive energy at a time when games are on hold. The GPA have liaised with players to ensure all 32 counties are represented.

Also read: Have your say! Get your nominations in for Longford's Dream GAA Football Team 2000 - 2020

GPA CEO Paul Flynn commented; “This is a fantastic idea, and the GPA are delighted to be involved. It’s a great way for players to stay connected to each other at this time of isolation while it’s great to be able to raise funds for frontline workers.

“There are many inter-county players, both male and female, among them. To be able to show our support for them in this way is something that we are delighted to be able to do. We are extremely grateful and extremely proud of their efforts”.

The tournament is a 1v1 knockout format, with senior inter-county hurlers and footballers facing off to be crowned the All-Ireland FIFA20 Champion. Each of the 32 counties is represented by a single player, with fixtures running across the May Bank Holiday weekend, with the final taking place on Sunday, May 3.

Leading Irish gaming community ‘The Republic of Players’ will also be involved with the delivery of the tournament, managing the live stream of matches and administration of the tournament.

The FIFA20 All-Ireland Charity tournament will be broadcast on Insomnia Dublin Gaming Festival’s Facebook and YouTube pages, free of charge, but viewers are asked to make a donation

Also read: Longford community spirit to the fore as Clonguish raises over €9,000 for the 'Do it for Dan' campaign