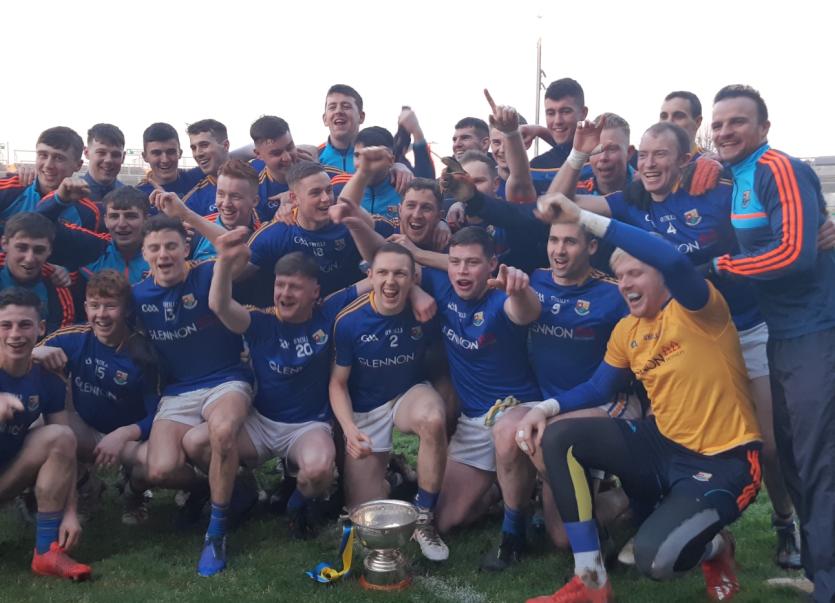 Twitter didn't exist when Longford last won the O'Byrne Cup in 2000 and after today's famous win, Longford's third in the competition (the previous wins were in 1965 and 2000) there many twitter messages of congratulations.

Congrats to @OfficialLDGAA on their 1-12 to 0-11 @gaaleinster O'Byrne Cup Final win over @Offaly_GAA today. First triumph since 2000 and many links with that success two decades ago @Longford_Leader #GAA https://t.co/J14b3wMlS1 pic.twitter.com/KsAvAlvZdr

O Byrne cup final FT: Longford 1-12 Offaly 0-11. Offaly tried hard and could have won but didn't play that well and scoreline is fair enough. However, the league game in two weeks is infinitely more important and Offaly won't be too worried by this defeat.

So proud of our boys in blue & gold. Once again they showed great heart & character in what was a deserved win. Delighted for Padraic Davis, Paul Barden,Donal Ledwith & Gavin Tonra who won the competition in 2000 as players and now part of our management team. Hon Longford pic.twitter.com/7gL0qVIO8x

One for the scrapbook!

Well done to Longford Seniors on winning the O’Byrne Cup in Tullamore today after 20 years. Special mention to Darragh Doherty who kicked a couple of big points when introduced early in the second half #superstuff #proudclub #proudparents pic.twitter.com/qn8FSRg4qr

Result Longford 1-12 Offaly 0-11 - Longford are O'Byrne Cup Champions for 2020. It's the first time they've won the Cup since 2000. Padraic Davis, Paul Barden, Donal Ledwith and Gavin Tonra, all part of that team are on the Longford management team now.

Cathal what a brilliant win for Longford @OfficialLDGAA yesterday 20 years is a long time to wait ,the attitude of the entire squad yesterday must fill all Longford supporters with immense pride

Well done to @OfficialLDGAA on a fantastic victory today in the O’Byrne Cup final. Special mention to our past pupils Barry O’Farrell, Daithi Mulvihil, Iarla O’Sullivan and Oran Kenny who are now representing Longford with great pride and distinction. @Longford_Leader pic.twitter.com/HoiY56tned

Congratulations to our Senior footballers @OfficialLDGAA on a fantastic win in the O'Byrne Cup final today. Well done also to @PadraicDavis and his management team. Great start to 2020!

Ah super lads, talk about bringing back a bit of pride in the values of what it means to be from Longford, Well done congratulations, and lets see the pride in the blue and gold continue!

Disappointing effort from Offaly today, got into a good position on a couple of occasions and just fell away for no good reason. Also, it just doesn't feel like a normal Offaly vs Longford game if it doesn't involve Anton Sullivan and Diarmuid Masterson skelping each other.

Nice to see Longford win the 1st bit of silverware of 2020.Pleasure to meet @bernardflynn15 again, last time I met him was when Mullinalaghta won Leinster in Tullamore also..Hopefully he'll be back in Tullamore for league clash in 2 weeks #luckycharm pic.twitter.com/1945Nc0NIY

A very successful day for all pic.twitter.com/UkRW13tpNP

Try tell @mickeyq06 and the people of Longford that the O'Byrne cup doesnt matter. It does matter. Congratulations to a brilliant @officialgaa man on captaining his county to some silverware. Well deserved. @essendonfc pic.twitter.com/C5nCE8JMdn

What a fantastic win today in the O’Byrne Cup Final by @OfficialLDGAA delighted for all involved. Well done to @PadraicDavis and his management team, and to captain @mickeyq06 and his players. Roll on National League!

Great day today with @OfficialLDGAA delighted for the team and all involved. Very lucky to work with the people I do pic.twitter.com/t0fZvePsLh

Congratulations to @OfficialLDGAA on a well deserved and long awaited return as @BordnaMona O’Byrne Cup champions! The last time they won was on the 6th of February in 2000! @gaaleinster @LiveGAAResults @officialgaa pic.twitter.com/0LdfCc1VJp

One for the scrapbook!

Well done to all involved today in the great victory over Offaly. Great to see new young players coming through @OfficialLDGAA. Well done to my old teammate @PadraicDavis