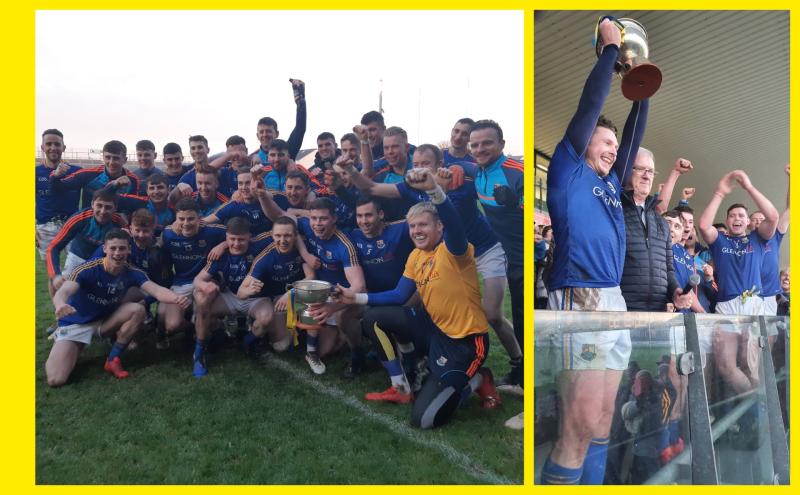 Longford were deservedly crowned O’Bryne Cup Leinster senior football kingpins for the first time since 2000 as their hunger and determination to succeed blew Offaly away in today’s final at Bord an Móna O’Connor Park, Tullamore.

The Longford men were full value for their 1-12 to 0-11 win and truth be told, just before half-time when Offaly had players in the sin bin, they were extremely unfortunate not to plunder for at least another two goals as they spliced the home defence apart.

As it turned out, it was Michael Quinn’s 16th minute goal that proved the decisive score of this midlands derby. Longford were 0-1 to 0-4 behind at the time and Offaly appeared to be cruising but after Quinn’s goal, Longford’s creaking ship stabilised and they were by far the better side for the remaining three quarters of this final.

At the interval the sides were deadlocked, 1-3 to 0-6, before Longford enjoyed a significant purple patch from the 46th to 52nd minutes and this yielded four unanswered points per sub Darragh Doherty (2), Dessie Reynolds and Darren Gallagher to give them a 1-8 to 0-8 lead and they never looked back afterwards.

Longford ‘keeper Paddy Collum hadn’t a threatening shot of any sort to deal with and this speaks volumes for the disciplined nature of Longford’s defensive formation and tackling. Indeed, the hosts lost three players through black cards at different stages and that is unacceptable at inter-county level.

Twenty years ago, when Longford defeated Westmeath in the O’Byrne Cup final, the team included Padraic Davis, Donal Ledwith and Paul Barden and this trio were the management on this occasion and there were also many other links with that triumph two decades ago.

O’Connor Park is certainly becoming a happy hunting ground for Longford teams and there were great scenes of jubilation among the supporters and players - similar to those when Mullinalaghta St Columba’s took Leinster club glory in December 2018 -  as Michael Quinn accepted the cup from Leinster Council Vice Chairperson Pat Teehan.

Having clipped the wings of Dublin in the semi-final and followed it up with silverware, Longford knuckle down to the serious business of the NFL next Sunday when they open their Division 3 campaign at home to Louth in Glennon Brothers Pearse Park and then on Sunday, February 2 they are back in Tullamore for another rattle at Offaly in round two of the NFL.

Offaly dominated over the next few minutes and they slotted over four unanswered points through Bernard Allen (2), Anton Sullivan and Shane Horan, 0-4 to 0-1 with nine minutes elapsed.

Longford, struggling to find their rhythm, found themselves on level terms by the 16th minute. Andrew Farrell, Daniel Mimnagh and Rian Brady were all central figures in a move that finished with Michael Quinn, now at full forward, powerfully bursting through for a goal. Mimnagh and Darren Gallagher were off target with opportunities to edge Padraic Davis’ team in front bringing Longford’s wides tally to four.

Anton Sullivan (22 mins) and Shane Horan (25 mins) contributed points for the Faithful County, 0-6 to 1-1, and in between these scores Longford defender Iarla O’Sullivan picked up a yellow card.

Offaly lost centre back Shane Nally to the sin bin for ten minutes after he was black carded for deliberately hauling down Michael Quinn who had goal on his mind yet again. Rian Brady duly dispatched the free.

With Nally off the pitch, Longford found plenty of space to carve out chances and in the 27th minute they were unfortunate not to find the net.

Firstly, Rian Brady blasted a thunderbolt of a strike against the under the side of Paddy Dunican’s crossbar and as the ball bounced back up into the air Kevin Duffley punched the ball against the bar again. It was a huge let off for John Maughan’s side.

Sensing there was a goal for them, Rian Brady surged through menacingly and his strike was well saved by Dunican at the expense of a ‘45 that Gallagher sent wide. Oran Kenny supplied the equaliser, 1-3 to 0-6, but there was time for a little more action.

The black carding of Anton Sullivan in the 33rd minute saw Offaly reduced to 13 players. Nally returned to the action in the 36th minute and two minutes later Longford supporters in the stand were somewhat incensed when Rian Brady’s free was waved wide by the umpires and the linesman concurred, compounding their upset.

On the resumption a Michael Quinn point edged Longford ahead for the first time since the opening minute of the final, 1-4 to 0-6. By the 43rd minute Offaly were back in front, 0-8 to 1-4, after Bernard Allen (free) and Anton Sullivan, following his spell in the sin bin, landed points.

Longford were gradually gaining supremacy around the middle third and with Quinn, Gallagher and Mimnagh exerting a greater influence they began to put the squeeze on Offaly. Sub Darragh Doherty kicked two lovely points while Dessie Reynolds and Darren Gallagher (free) were also on target as Longford registered four vital points without reply and went 1-8 to 0-8 clear with 52 minutes gone.

Bernard Allen pulled a point back for Offaly and another sub Peter Lynn pointed for Longford, 0-9 to 1-9.

Allen scored his fifth point and Oran Kenny replied with a brilliant point at the other end in the 67th minute.

Rian Brady’s successful 70th minute free, following a foul on Liam Connerton, made it 1-11 to 0-10 and with the four point cushion the Longford men were not got to be overtaken.

Offaly sub Aaron Leavy kicked a point and in the 3rd minute of additional time, fittingly, Darren Gallagher fisted a point from what looked to be a hopeless situation, giving Longford a fully deserved 1-12 to 0-11 win.