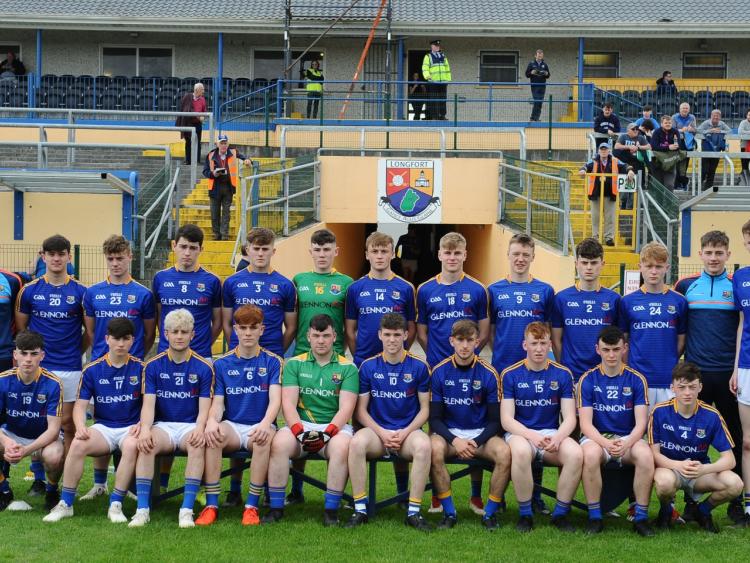 The Longford squad pictured prior to their semi-final win over Louth in Glennon Brothers Pearse Park Picture: Declan Gilmore

For Longford’s U17 manager Dan McElligott this evening’s (Wednesday, July 3) Seamus Heaney Cup Leinster Minor Shield Final against Wexford in O’Moore Park, Portlaoise at 7.30pm is a little bittersweet for him.

McElligott had hoped his side would do well in the Leinster Minor Championship but they lost out in the group stages to Laois in their final game.

They have since bounced back with victories over Offaly and Louth (2-18 to 2-9) to book their place in this evening’s final against the Slaneysiders.

Longford are the holders of the Seamus Heaney Cup and looking ahead to the game, Dan remarked: “It will be tough enough. When teams get to finals it’s all about on the day. You just have to produce it on the day.

Also read: Archer on target as Dublin demolish Longford in Leinster U20 quarter-final

“The lads have buckled down well since the championship. We were gutted not to get through. The players have drove it on and have trained hard since. They learned a lot but it was in a cruel way.”

With the defeat to Laois very raw, two players from last year’s U17 panel spoke up and made the current squad realise that their year could be salvaged in the Shield.

McElligott said: “Conor Leonard and Richard Prior spoke in the dressing room when we had the first training session after we were knocked out of the championship. They took it on themselves to paint a picture of winning the Shield.

“Once Longford won that last year they didn’t harbour back to losing in the championship. It was a mighty achievement to beat Dublin especially at home.”

McElligott has been with these bunch of players for the past number of years and admitted that they have never played Wexford under his guidance.

“Of all the teams we have come up against down through the years we have never come across Wexford. We will respect them.

“To get to a final they have had to put in a big effort as well. We are focussing on getting our game right. If they play to their potential we’ll be there or thereabouts.”

Longford have a number of key players to depend on but for McElligott it’s not about any individual for him it’s all about teamwork and players willing to put the effort in.

“Teamwork is my thing,” stressed McElligott. He added, “You can have extremely talented players but you need effort and teamwork. When everyone puts their shoulder to the wheel. They’ve all brought good form into the last few games.”

Training has been going well for this game. McElligott thanked St Mel’s College Principal Declan Rowley for his cooperation with a training pitch for the past few months.

“Declan Rowley has been great in giving us St Mel’s pitch since we started. It was brilliant because we would’ve had no pitch half the time. It would be nice for him too if we won the Shield.”

For many, this game is their last at underage level for Longford. The Kerry native who has made Mullinalaghta his home is hoping they can end it on a high and bring the Shield back to Longford.

“As a county we don’t win that much and this year only the hurlers have won something. We are hoping there’ll be a good enough crowd there from Longford. This, for many, is their last involvement with Longford underage,” concluded McElligott.