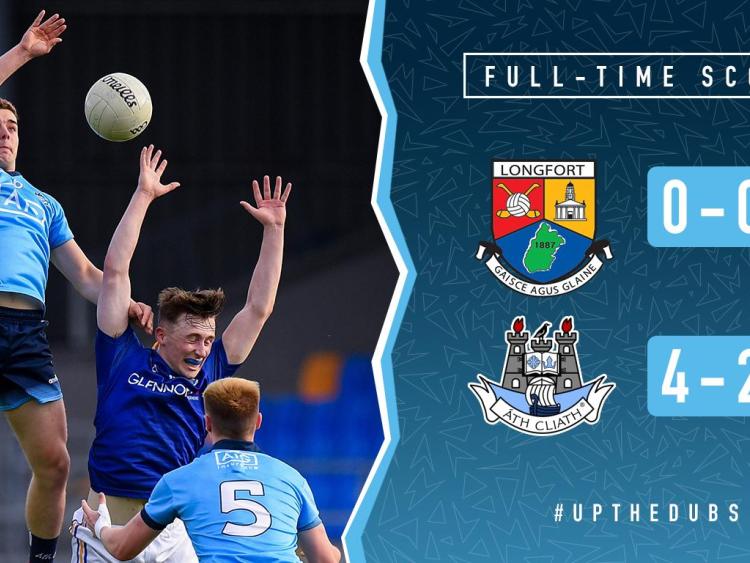 Ciaran Archer was Dublin’s main target man as they demolished Longford in Glennon Brothers Pearse Park this evening to advance to the Eirgrid Leinster U20 Football Championship semi-final.

Dublin were ruthless and clinical throughout with the St Maurs clubman scoring 3-08 (five frees) of his county’s tally. The scoreline could have been bigger had Dublin put away all the goal chances they created.

It was like shooting practice for the Dubs in both halves. Archer  opened the scoring inside the second minute kicking over a free. He added three more points to the scoreline (one free) before he raised the green flag for the first time in the 12th minute; catching Donal Ryan’s free before turning and shooting low to the net.

He hit the post of the post one minute later as the Dubs continued to attack. Longford’s opening score came in the 17th minute when Oran Kenny pointed over a free. He added another but that was all Longford could score in the first half.

Just 22 seconds had elapsed on the clock in the second half when Dublin kicked over 17th point through Doran. Karl Lynch Bissett blasted his lo drive wide as the Dublin were unrelenting.

In the 32nd minute Dublin scored their second goal; Longford keeper Patrick Murray Brian O’Leary’s initial shot but substitute Harry Ladd finished the rebound. Five minutes later and it got worse for Dublin when they were awarded a penalty. Archer duly dispatched the spot-kick despite the valiant efforts of Murray.

Ladd hit the butt of the post in the 44th minute as Longford struggled to contain the Dubs or handle their physicality. They stretched their advantage to 26 points in the 49th minute. The biggest cheer of the evening came in the 50th minute when Joe Hagan kicked Longford’s first point of the second half; their third overall.

Hagan kicked over a free before Aidan McGuire hit over an excellent score to register Longford’s fifth point. Those points were quickly cancelled out with a Ladd point and Archer’s third goal of the game.

Kenny kicked over late frees for Longford but this game was over as a contest in the 12th minute when Archer scored his first goal of the game.