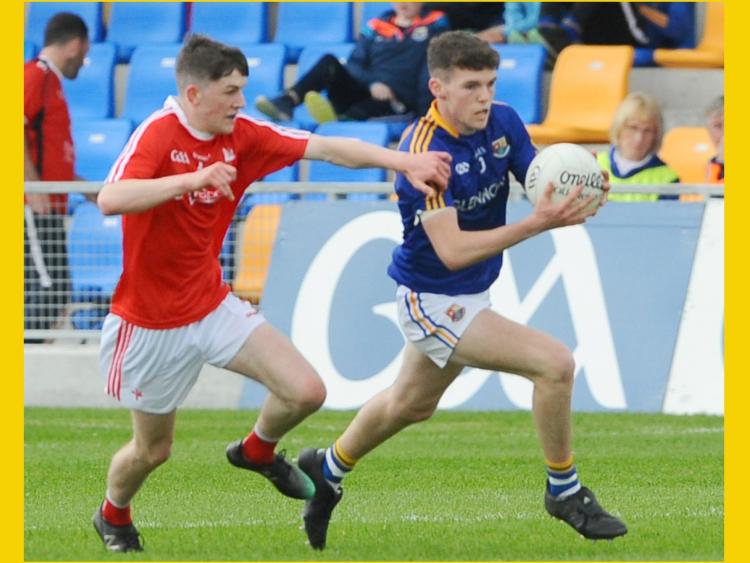 Holders Longford advanced to the Leinster Minor (U-17) Football Shield Final against Wexford (next Wednesday July 3 in Portlaoise) for the Seamus Heaney Cup following an emphatic victory over Louth at Glennon Brothers Pearse Park on Saturday last.

There were nine points between the sides at the end but it could have been a lot closer had Louth succeeded in converting the several goal chances that they created during the course of the game with Donal Leahy and Ben Collier having the best of those chances in the first half of the semi-final clash.

Louth cut the gap to five by the 49th minute but a goal from Conor Leonard three minutes later set Longford on their way to victory.

Keelin McGann, with the impressive total of nine points (five frees) to his credit, led the attack for Longford and was a real threat throughout with Tiarnan Hussey also causing problems for the Louth defence.

Longford made a fine start to the game. McGann scored two points (one free) and Leonard landed a point to put them ahead by three in the fifth minute. Craig Shevlin replied with a pointed free for Louth in the eighth minute.

The lead was five in the 10th minute when a Tiarnan Hussey free was flicked to the net by Jack Duggan.

The impressive Conall McCaul hit over a free for Louth minutes later but the home side replied with a McGann free in the 14th minute.

Longford keeper Conor Skelly made a fine save to deny Luke Matthews in the 15th minute; tipping his effort over the bar for a point. Louth them hit two bad wides as they enjoyed a spell of possession.

Jack Duggan kicked over an excellent point in the 17th minute. Down the other end Donal Leavy should have done better with his effort, hitting it low and wide. Keelin McGann kicked over two more points (one free) and a sweet Tiarnan Hussey point put Longford ahead by eight in the 28th minute.

Ben Collier had a goal chance for Louth moments later but he blasted his effort wide. Hussey then kicked over two fine points to leave Longford in a commanding 1-10 to 0-3 lead at the break.

McCaul caused problems for Longford on the changeover but McGann, Ciaran Scanlon and Hussey kept the scoreboard ticking over for the home county and they were ahead by 11 midway through the second half.

McCaul kicked over a fine point and that was followed by a goal for Louth in the 47th minute after McCaul was fouled and substitute Kyle McElroy converted the penalty. A pointed free from McCaul cut Longford’s lead to five in the 49th minute.

Longford responded with a great point from substitute Kevin Tansey and a goal from Conor Leonard settled the contest.

McCaul got late consolation scores for Louth while Keelin McGann kicked over three points in stoppage time to seal the win.