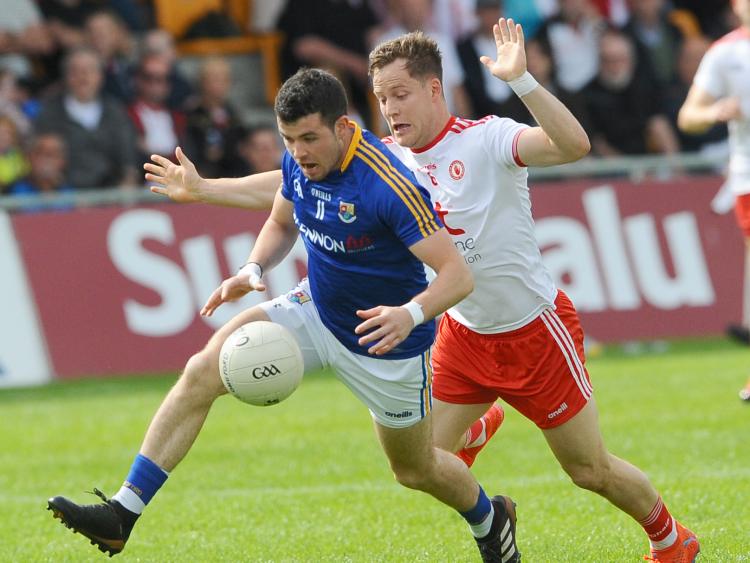 Barry McKeon on the ball for Longford in this tussle with Tyrone defender Kieran McGeary. Action from the All-Ireland SFC Qualifiers Round 2 game at Glennon Brothers Pearse Park on Saturday evening last Picture: Declan Gilmore

For Longford manager Padraic Davis it was a case of ‘what might have been’ on Saturday evening last as his team lost to Tyrone in Round 2 of the All-Ireland Qualifiers by four points.

Also read: Longford finish with a flourish but damage inflicted in 1st half as gift goals ensure Tyrone prevail

A downbeat Davis said he thought his side could cause an upset. “Hugely disappointed. I’m just after coming out of the dressing room and I told the lads “I really didn’t know what to say to them. I certainly hadn’t planned it.”

“We had a brilliant 10 days/two weeks in the lead into this game and I genuinely believed that we were going to turn Tyrone over. It hasn’t happened and it’s disappointing. We’ll take a look at it and see where we go from here.”

Looking back on the game the concession of two first half goals set Tyrone on their way.

“I don’t think there is any doubt about it; that’s the difference in the game. Not in terms of the scoreline, I think it’s in terms of how the game panned out and Tyrone were fit to play the game on their terms and control the tempo of the match,” stated Davis.

It was the manner in which Longford conceded the goals that really annoyed the Longford manager.

“They were two fortuitous goals to be honest. They were what Longford needed, not Tyrone, particularly when Division 1 plays Division 3. We had to get those or even one. It comes down to those margins. That’s football and that’s sport.”

Despite those goals and falling behind by 10 points Longford never gave up and battled right until the end and that is something that pleased Davis.

“It’s all about how they finished. They haven’t thrown in the towel here. They kept at it and the subs have contributed. They’ve come strong in the end.

“It was just a pity we didn’t do that a little bit earlier. We needed to hit that net and I think that game would’ve changed. The crowd would’ve lifted us. They battled hard and I’m very proud of them; they deserve great credit for that.”

The quality Tyrone possessed was clearly evident at times when they were able to retain the ball or get back in numbers.

Davis said: “Tyrone are the next level or two up. We found out that on this occasion. You don’t encounter that sort of quality in Division 3. It was a huge step-up. It was a great occasion to have them here at home. It’s certainly not a moral victory as we are hugely disappointed.”

For one reason or another Longford never had their full panel to pick from this year but this gave others a chance to impress.

“It’s great to see some of these young lads coming in and showing real quality and leadership at a very young age.

“We had a really good year out of Darragh Doherty and Joe Hagan and that is hugely encouraging. I’m very proud of this group,” concluded Davis.