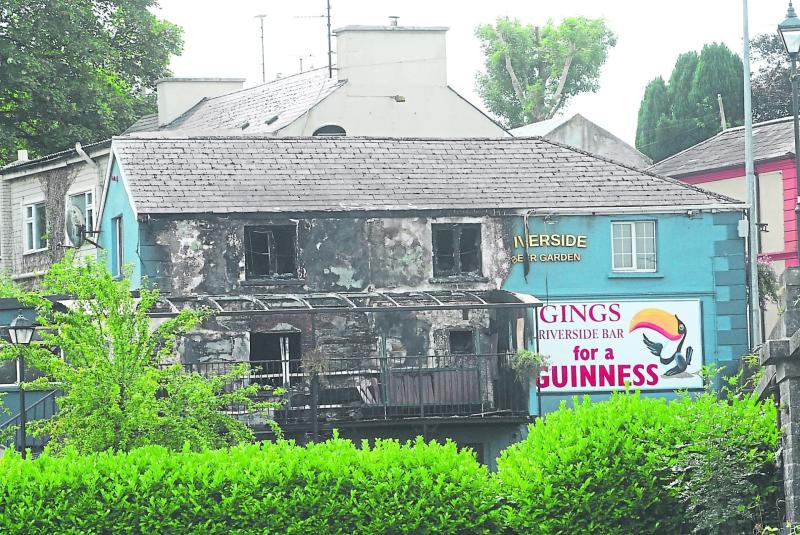 The wider Carrick-on-Shannon community has rallied behind the owners and staff of Gings in the wake of the fire.

Owner of the pub, Brendan Whelan, told the Leitrim Observer he is still in a state of shock but is thankful that no one was hurt.

“The whole place is ruined inside but the main thing is that no one was hurt or killed or that the fire didn't spread into the neighbour's house,” he said.

The fire came as a huge shock to Brendan Whelan who said he was at home in bed when the Gardai rang him at 6.40 last Sunday morning to tell him there was a fire in the pub.

He said he didn't think it was going to be too bad until he drove down Bridge Street and saw the flames that had taken hold of the building.

He admits that it hasn't properly hit him yet and he has not slept since.

However, he said he has to look to the future.

“I'm not feeling sorry for myself - there's no point. It's a major blow but I just have to keep going and hope that the insurance will sort it out and I can rebuild it,” he said.

In that regard, the insurance company's forensics experts are expected to visit the site this week to examine the scene and determine the cause of the fire.

Garda forensics have already conducted an investigation which has ruled out any foul play.

Taking to social media, McHugh's Bar said: “Today is a sad day in Carrick. By far the best beer garden in the country which was looking unreal thanks to the constant dedication of its owners is a fine iconic sight that has been taken from us for now. Heartbreaking for any business owner but no doubt ye will come back bigger and better than ever. We are thinking of ye Benny, Tracey & staff. Carrick won’t be the same until it’s back & the town are behind ye!”

Carrick-on-Shannon Tidy Towns committee said they were “devastated for Benny and the Whelan family” and also extended their sympathy to Ging Duignan's family who previously owned the premises.

Local musicians took to social media as news of the fire broke with the Late Nite Radio Band posting: “Probably the best beer garden in the country at Gings Bar & Riverside Beer Garden in Carrick-on-Shannon. Today devastated by fire, it is a symbol of Carrick-on-Shannon and a place where each of us in the band cut our cloth. Thinking of Benny and Tracy and the gang there, I know you’re at a loss but we’ve no doubt the phoenix will rise from the ashes again.”

Local sporting organisations also expressed their support with Shannon Gaels GAA posting “It truly is heartbreaking to see what happened to the iconic Gings bar in town this morning. We too are thinking of Brendan and his team today and know they will need time but will come back stronger than ever”.

St Mary's Kiltoghert GAA Club said, “St Mary's club and community wish to express our shock and sadness but also our solidarity with Benny, Tracey and all the staff of Gings Bar & Riverside Beer Garden after the devastating fire on Sunday morning. With Benny's determination and hard work we look forward to Gings reopening and everyone's continued support of the best beer garden in the country.”

Carrick Rowing Club described an “air of sadness” around the town following the fire. “The Committee and Members of Carrick Rowing Club join with the Carrick-on-Shannon community to express our sadness but also our solidarity with Benny, Tracey and all the staff of Gings Bar & Riverside Beer Garden after the devastating fire this morning. The premises of coursebears the name of one of our great luminaries Mr Ging Duignan. Gings and the Whelan family have always been great supporters of all things Carrick and our club. Only two weeks ago the rowing community descended on Gings for hospitality and refreshments after our annual Carrick Regatta. The old place was looking better than ever as was the beer garden where huge time and effort has been spent in recent times. We look forward to a return for Gings in the future but for now there is an air of sadness around Carrick.”

Carrick Town Football Club expressed their sympathies to the owners at this “unimaginably heartbreaking time”.
“The sympathy and best wishes of Carrick Town F.C. Committee and members go out to Benny & family and all the staff of Gings Bar & Riverside Beer Garden. It is an unimaginably heartbreaking time for them and the community to see a true gem of the river Shannon meet such a cruel fate. Benny, as a member of Carrick Town F.C. and a coach with the club, our thoughts are with you, your family and all staff at this time.”

Local resident, Thomas Glancy said, “Wishing well to Brendan and Tracey, Emma and all the staff at Gings. best beer garden in Ireland, unrivalled hospitality, convivial conversation flows, great for all sporting and social occasions. Bigger, brighter and better days await you. Out of the ashes, the phoenix ascends. To a new Gings in the near future.”