Longford music fans urged to row in behind Christmas single 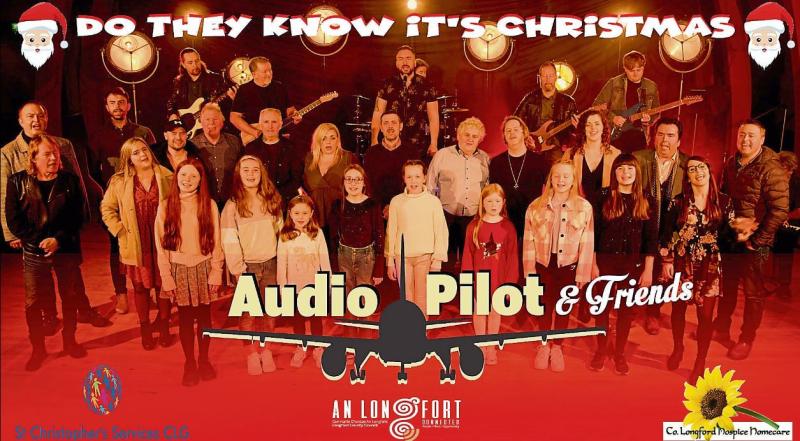 Longford music fans are in for a festive treat next week thanks to the eagerly awaited unveiling of a special 'Band Aid' style Christmas single.

Renowned four piece group Audio Pilot are fronting the novel musical initiative which will see input from a whole host of well known faces from the local music industry.

What's more, all proceeds from the novel release will go to St Christopher’s Services and Longford Hospice, two local organisations whose revenue streams have been adversely affected by the ongoing coronavirus pandemic.

The principal producers, Barry Conboy and Mick Warnock were joined by Audio Pilot with Barry and Mick providing the vocals under the guise of music guru Paul Gurney at Longford's Real World Studios.

A revered band for the best part of two decades, Audio Pilot have, and continue to be one of the midlands' stand out performers.

Like many of its contemporaries, the ensuing public health emergency has been as challenging as it has unprecedented.

Nothing says Christmas in Longford quite like Jude Flynn's Fireside Tales

The past year has been a difficult one for many of us, filled with the unfamiliar.

Longford panto to ensure the safety of Snow White patrons

As the country is being hit with more and more Covid restrictions, it seems our Christmas could be hampered by the pandemic once again.

By the same measure, the past 18 months has given them a chance to reflect and a drive to fulfil a number of ambitions. One of these was to produce a top class Christmas single with a view to aiding key frontline bodies who have endured an equally torrid spell.

Boosted by Longford County Council grant funding at the behest of Cllr Gerry Warnock, the single will be accompanied by a video on Audio Pilot's social media page with a Go Fund Me link requesting donations to both respective charities.

The launch night takes place on Friday (December 17) in Escobar where Audio Pilot will, along with an array of local musical talent, lift the lid on what is undoubtedly one of the most long awaited musical productions in recent memory.