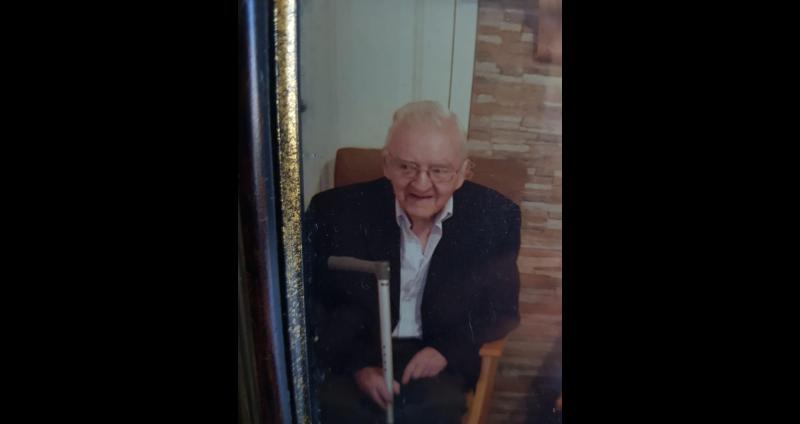 The peaceful death occurred at his residence on Saturday, April 10 of William Lloyd, Leo Casey Terrace, Ballymahon, in his 90th year, surrounded by his loving family.

Predeceased by his wife Maureen and daughter Patsy, he was the eldest of eleven children, who are now all pensioners. Billy was a well-liked and respected member of the local community.

Affectionately known as ‘The Gunner’ by everyone in the area,  he met his wife in London and they were married for 67 years until she sadly passed away over three years ago.

He was  a happy, easy-going gentleman who never complained and a wonderful neighbour to all in Leo Casey Terrace, always welcoming at his home.

He had a keen interest in horticulture, tending to his vegetable garden over the years, he also worked in many gardens in the area.

He also enjoyed the odd flutter on the horses, a very witty man with some fantastic one-liners.

In fact he actually cycled his Motorbike “the Bluebird” down to Ballybunion every Monday morning to work and back to Ballymahon again on Friday evenings.  He was also a Postman for a few years.

Down the years Billy and his wife used to enjoy going into Tommy and Breege Murray’s pub on Main Street and also into the late Peter Curran and Nora’s. He enjoyed his visits there, chatting to the locals, he had a great ability to chat to any age group and had a great interest in current affairs and sports.

He certainly lived a long and happy life with his wife, children, grandchildren and great-grandchildren all of whom he loved dearly, he often spoke of them with great pride. He always loved the many family celebrations over the years.

Billy’s Funeral Mass was celebrated in St Matthew’s Church on Tuesday, April 13 by Fr Liam Murray where the beautiful singing was performed by two of his great- grandchildren Cathal and Millie, Carmel’s grandchildren with Jackie, daughter-in-law of Mary on the Guitar.  He would have been so proud of them.

Gifts brought to the Altar reflecting aspects of his long and happy life were a photo of Billy and his wife Maureen, the love of his life,  a family photo, a rolling pin to remember his days in the Bakery business and a shovel because of his love of gardening.

At the end of the Mass Billy’s grand-daughter Zara thanked Fr Liam for the lovely Mass.  She also thanked Dolores Kearney who was Billy’s carer for some time who together with his devoted family, looked after him with great care and kindness, also his Doctors, Palliative care nurses and anyone who helped him out.  She spoke lovingly of her Grandad and how much he will be missed by his family, neighbours and many friends.

A large number of people, keeping their social distance, lined the street and at the graveyard to bid farewell to a lovely man which bore testimony to the respect which has been held for Billy and the Lloyd family in the area.  Billy’s remains were laid to rest in Forgney Cemetery.  May his Soul rest in peace.