WEATHER FORECAST: Hurricane Epsilon leftovers to have affect on weather in Ireland 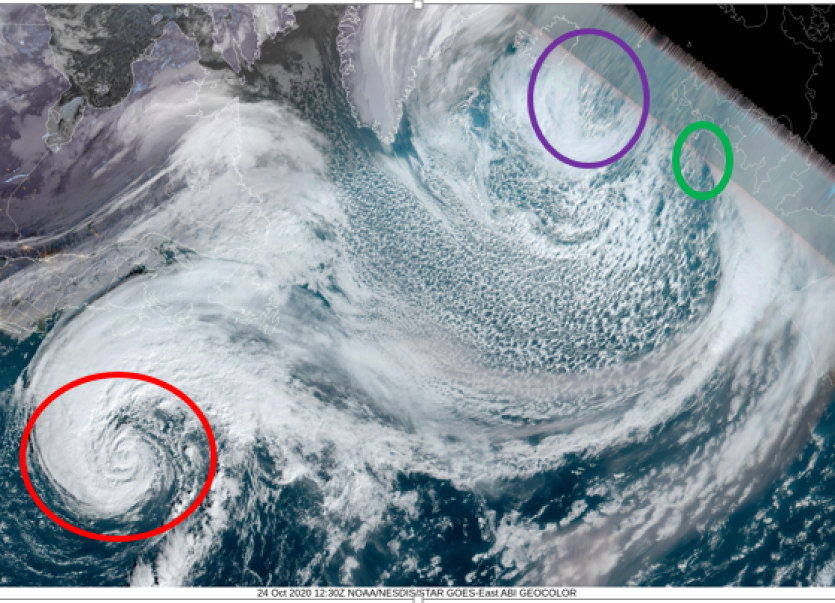 WEATHER FORECAST: Hurricane Epsilon leftovers to have affect on weather in Ireland

The remnants of the ex-Hurricane Epsilon is the feature of the mid-term school break weather forecast from Met Éireann for Ireland.

The week will start out on the cool said and showery however it will become milder and wetter later in the week as the effects of the outskirts of the former hurricane sweep up through the Atlantic.

While the storm is not forecast to hit Ireland, its scale mean the fringes will bring heavy rain and wind.

Met Éireann has issued a Meteorologist's Commentary on this week's weather and what impact Epsilon could have. In it, meteorologist, Liz Walsh said it said the hurricane is expected to transition to a mid-latitude low by Monday. She said it is expected to merge with another low-pressure system.

"Frontal rain associated with this low-pressure system containing the remnants of Epsilon, is expected to cross the country on Tuesday. Current guidance keeps the low-pressure system itself - and by default the strongest winds - out to the west of Ireland in the central North Atlantic. But as always, Met Éireann’s meteorologists will continue to monitor the situation for any changes," said the meteorologist's commentary. MORE BELOW THE TWEET BELOW

A nationwide forecast and outlook covering the next week can be found here. https://t.co/9gKN6SVok4 pic.twitter.com/mo7JvbBfyI

NATIONAL FORECAST issued by Met Éireann at 5.19 am on Monday, October 26.

MONDAY
Bright and breezy today with sunny spells and passing showers. The showers will be heaviest and most frequent this morning, becoming lighter and increasingly isolated this afternoon and evening. Highest temperatures of 10 to 12 degrees with moderate to fresh west to northwest winds easing later.

Monday night will start dry and rather chilly under clear spells, but cloud will soon thicken from the southwest with outbreaks of rain developing in Munster and west Connacht, before spreading to all areas overnight. A clearance will develop in the southwest before morning. Lowest temperatures of 4 to 7 degrees Celsius, with light to moderate southwest winds backing gusty southeast as the rain develops.

Damp, cloudy and breezy to begin tomorrow, Tuesday, with outbreaks of rain gradually clearing northeastwards during the morning and early afternoon. Brighter, fresher conditions will follow from the west with sunny spells and showers. However, some of the showers will be heavy with hail and a risk of isolated thunderstorms. Gusty southeasterly winds will veer moderate to fresh and gusty westerly as the rain clears. Afternoon highs of 9 to 12 degrees Celsius.

On Tuesday night showers, some heavy and prolonged, with hail and isolated thunderstorms, will continue to feed in off the Atlantic affecting mainly the western half of the country and coastal counties of the south. It will be drier elsewhere with clear spells. Lows of 4 to 7 degrees, in moderate to fresh and gusty southwest winds, strong to near gale on windward coasts.

Wednesday: Cool and blustery day with sunny spells and showers. The showers, some of them heavy and prolonged, with hail and isolated thunderstorms, will affect mainly western parts of the country at first, but they will spread elsewhere during the afternoon. Highest temperatures of 9 to 11 degrees in fresh and gusty southwesterly winds, strong to near gale on Atlantic coasts. Showers will retreat to Atlantic coastal counties and it will become dry in many areas for a time with clear spells early on Wednesday night. Cloud will soon increase, however, and heavy rain will extend from the Atlantic to affect most parts by morning. Moderate southerly winds, increasing fresh to strong and gusty near western and southern coasts overnight. Minimum temperatures of 5 to 8 degrees

Thursday: Wet and windy with spells of rain in all areas. The rain will be heaviest and most persistent in Atlantic coastal counties with spot flooding likely there. Milder than of late, with maximum temperatures of 13 to 16 degrees in fresh and gusty southwest winds, strong to near gale on southern and Atlantic coasts. Cloudy, misty and humid on Thursday night, with rain continuing in many areas, although the rain will tend to be lighter and patchier in the east and north. Lows of 10 to 13 degrees generally, with moderate to fresh and gusty southwest winds. A little cooler in Ulster and north Connacht with lows of 7 to 9 degrees in light variable breezes.

Friday: Continuing mild with further spells of heavy rain moving in from the Atlantic bringing an ongoing risk of spot flooding. Winds will be moderate to fresh and gusty southerly in the south, light variable further north. Top temperatures of 13 to 16 degrees. Wet and windy conditions currently indicated for Friday night.

Next weekend: Current indications suggest that the weather will continue mild and unsettled next weekend with further spells of heavy rain or showers and strong winds possible.