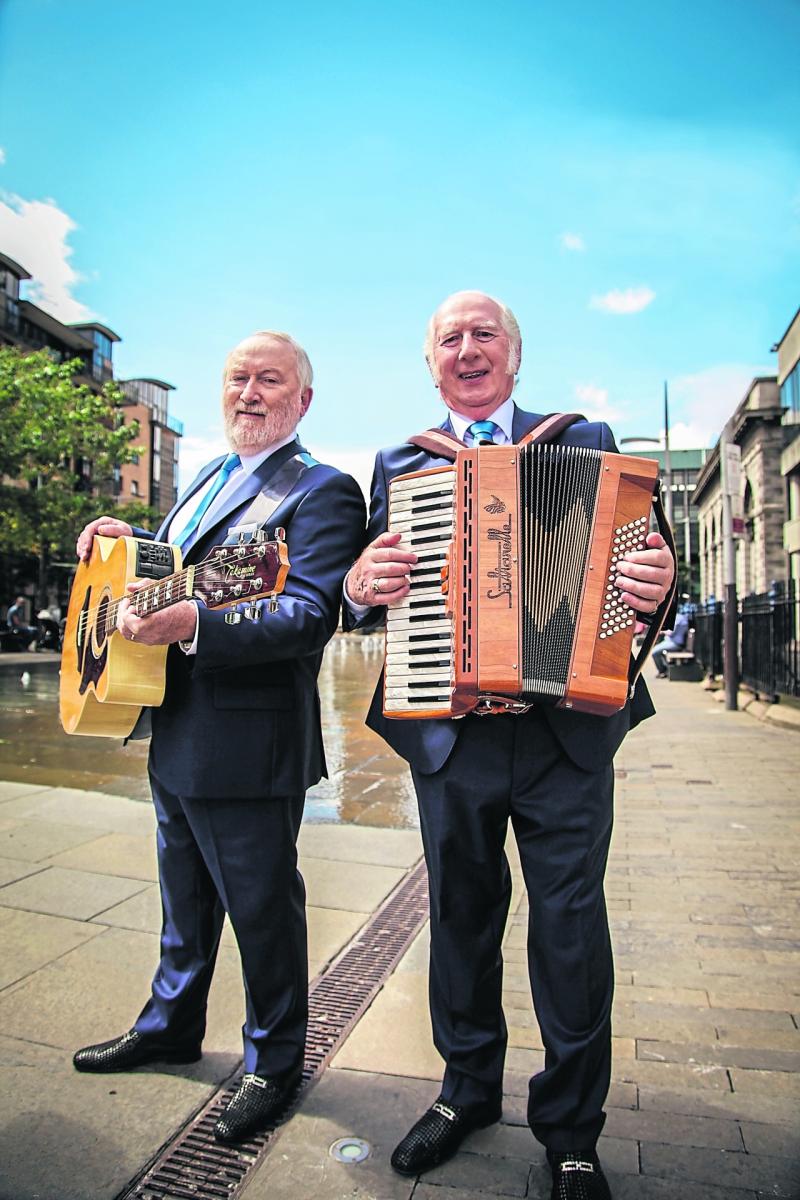 Foster & Allen will perform at the Rustic Inn, Abbeyshrule on December 30

The story of Foster & Allen began back in the seventies when Mick Foster and Tony Allen were playing in Country Music bands around Ireland. In 1975 they got together a small group and went over to the UK to work the Irish music venues on a short tour.

Mick and Tony had, at this stage, the idea of working together as a duo, playing ‘easy listening’ music with a touch of traditional Irish instrumentals. When their UK tour finished, they decided to let the band return to Ireland whilst they stayed behind to try out the 'duo' on the public. They played several venues in the London area and the reaction was very favourable; so much so, they decided to remain as a duo and 'Foster & Allen’ was formed.

It was difficult at the beginning and after a time working around the circuit in the UK and Ireland, they released their first single record, The Rambles of Spring. This made a good impact on the Irish market and Foster & Allen were soon in demand for cabaret venues all over Ireland and to a lesser extent the UK.

At the end of 1978 Foster & Allen released the single, A Bunch of Thyme, in Ireland, which entered the Irish charts and became their first top-selling No. 1 single. It stayed in the Irish Charts for 40 consecutive weeks, re-entering for a further 13 weeks.

However, at this stage, this was only in Ireland. It was not until 1982 that this single was released in the UK. It was played by all the radio stations in Britain and was soon in the ‘pop’ charts. It climbed rapidly to the top half of the British Top 20. At the time, Mick and Tony were in the USA on a tour and it came as a great shock to them both when they were contacted and told to fly back to Britain immediately as they were required to appear on Television’s Top of the Pops.

Things now started to happen very fast for the new Foster & Allen and the demand for their services at venues all over Ireland and the UK increased immensely. They released another single, Old Flames, which also made its way into the UK charts and Foster & Allen were on their way to stardom!

They did their first concert tour of the UK in 1983 and this tour was boosted even more by the release of another mega hit single, Maggie. This proved to be a very popular song and, along with A Bunch of Thyme, have become the signature tunes for Foster & Allen. Since then, Mick and Tony have toured the UK twice each year playing to sell-out concerts wherever they went.

In addition to the UK tours, Foster & Allen have toured the USA, Canada, South Africa, Australia, New Zealand and Tasmania. Their first tour of Australia took place in 1984 and in February of the same year, their single, Maggie went No. 1 in Australia and New Zealand Charts. They have subsequently toured Down Under 19 times and are heading off again on a tour of Australia in April/May.

On their last sell-out tour of New Zealand in early 2018, their album Timeless soared up the New Zealand Music Charts to No. 5.

They have appeared on numerous TV shows in Ireland, Scotland, England and Wales as well as Australia, USA and Canada and they have had their own TV series on RTE Television in Ireland. In the early days Mick & Tony performed on stage as a duo, but in 1982 (when the concert tours started) they added a band to their show thus giving a much fuller sound to their program.

On the recording front, Foster & Allen have to date released over 30 albums, all of which have gone into the British charts. This is a great achievement for a middle-of-the-road ‘easy listening’ act, album sales being a very accurate reflection of the true popularity of any stage performance.

As well as the albums, they have released fourteen videos/DVDs, again all of which have entered the British charts. The video, Souvenirs and Memories, reached No. 3 in the charts around Christmas 1991, the By Request video went straight into the No. 1 spot in 1993 and their latest DVD/Video release is We Owe It All To You – 40 Years On.

In 2020, they will celebrate 45 years together in the music business and to coincide with this they released Timeless Memories, which features 182 tracks from ten of their most popular and favourite albums, many of which have not been reissued in Ireland or the UK for a number of years; Maggie, After All These Years, Reminiscing, Reflections, Remember You're Mine, Souvenirs, Memories, Heart Strings, By Request, Songs We Love To Sing

To date, Foster and Allen have achieved album and video sales in excess of 20 million worldwide. Foster & Allen’s style and easy listening sound remains as fresh and exciting as ever. They really enjoy the business they are in, especially the live concerts.

The duo are beginning a tour of Ireland this month and will bring their easy-listening music to the Rustic Inn, Abbeyshrule, on December 30. The unique Foster & Allen sound will be with us for many years to come.