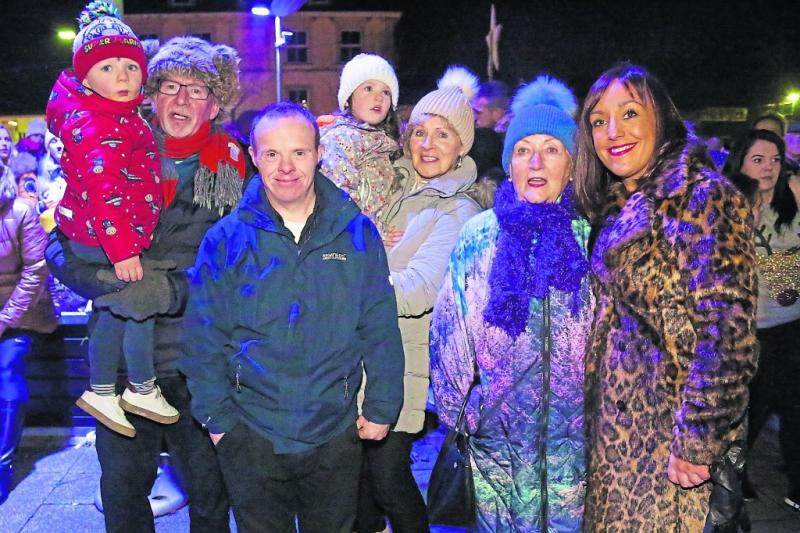 Judah, Michael, Séan, Patricia and Lizzie Keenan, along with May and Niamh Donlon (Longford Chamber of Commerce President) pictured at the switching on of the Longford town Christmas lights

The festive cheer was clearly evident in Longford town on Friday last as people gathered in their droves for the annual switching on of the Christmas lights.

The event, which was co-hosted by Longford County Council and the Chamber of Commerce, saw the big man in red - Santa Claus - taking time from his busy schedule to help out.

Chamber President Niamh Donlon paid tribute to the work carried out by both the local authority and Gardaí in the lead up to the big night.

She stated, "Our 'Build Longford Campaign' initiative seeks to highlight and promote local retailers and business. We want to highlight the immense contribution these businesses are making to the local economy and wider community.

“A strong, vibrant local retail sector is critical to the town's recovery and we are encouraging the public to think of the many local jobs supported by local businesses in the run-up to Christmas.”

Cathaoirleach of Longford Municipal District, Seamus Butler, told the Leader there was a 'record crowd' in attendance to witness the occasion.

“I would think there was up to 1,000 people between the Market square and the surrounding streets,” he said.

Cllr Butler stated, “It was really for the children, that’s what it’s all about. There was a huge turnout of children and they all lined up to see Santa afterwards.

“We have a purpose built grotto which got its first outing this Christmas.

“I think we have the nicest set of lights. There is new investment every year and I think they look particularly well this year. A lot of people have commented on that.”

This year's event also coincided with Longford Chamber’s retail loyalty promotion which had been taking place in local businesses.

Participating shoppers completed loyalty cards which granted them entry into a draw to win €1,000.

The winner was announced live on the stage on Friday, with the €1,000 prize going to Aughnacliffe.

Cllr Butler praised the ‘tremendous’ cooperation between the Chamber of Commerce and local authority, which enables nights like these to take place.