"It is up to MII to now lift the injunctions" 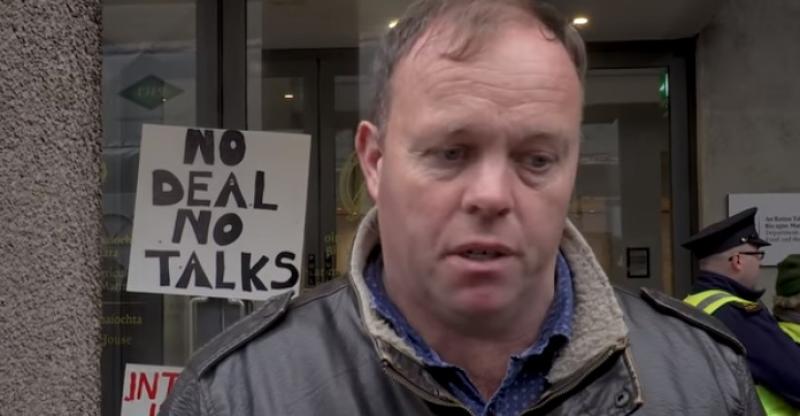 Beef Taskforce talks at the Department of Agriculture in Dublin were suspended earlier today, Monday October 14, after representatives from Meat Industry Ireland (MII) were blocked from entering the building as a result of injunctions still held against two Longford farmers.

The two farmers, Colm Leonard and Cllr Paraic Brady, were involved in the recent protests at C&D Foods in Edgeworthstown. Cllr Brady was one of the many farmers who confronted representatives of MII and Director Cormac Healy at today's meeting, as they attempted to gain access to the building.

Meat Industry Ireland claim that they were ‘physically and aggressively’ prevented from entering the building and stated that they have honoured the agreement to withdraw all legal proceedings against protesting farmers. Paraic Brady, however, confirmed otherwise to the Longford Leader.

“We are back at a stalemate again.” Cllr Brady said, before adding, “It is up to MII to now lift the injunctions.”

Continuing he said, “ I couldn’t get out of him (Cormac Healy, MII), the reason why MII have not lifted the injunctions.

“He did say to me that all injunctions had been lifted at meat processing plants. But that is not true, as C&D Foods is a processing plant as they process the fifth quarter.”

Cllr Brady told the Leader that MII are being ‘very foolish’ and are the reason that negotiations are now being held up.

“They are being very foolish.

"They are stuck between a rock and a hard place at this point.” he said.

Although Cllr Brady feels the injunctions will be lifted at some point, he warned of farmers making the move back to pickets if necessary.

He said, “I do think that they will lift the injunctions for the sake of the talks. If they don’t, it just shows that MII weren’t interested in making a deal in the first place.

“There is no hunger to go back on the pickets, but the feeling on the ground was that they would go back and picket different retail outfits belonging to some of the beef processors, such as C&D.

“We don’t want to do that either if it can be avoided, but the ball is in MII’s court

Cllr Brady then reiterated calls for the removal of said injunctions to allow for ‘meaningful talks’ to take place.

“I would hope that common sense would prevail. Let’s get these two injunctions off the table and have meaningful talks going forward.

“There is no appetite for any farmer to go back protesting, but nobody knows what’s going to happen.

“If the meat industry are going to play games, unfortunately it is not going to be pretty.” he warned.

Also read: Injunctions on Longford farmers involved in protest at C & D Foods in Edgeworthstown 'must be dropped immediately'

Cllr Brady expressed his ‘bewilderment’ as to why the injunctions remain, especially after Minister Creed had stated that they would all be removed.

He stated, “The minister needs to sit down, clarify that it was all injunctions and that the C&D protests were part of the bigger picture and protests taking place all over the country.

“Seven organisations that were at the talks are in agreement of that. I cannot understand why MII are digging their heels on this one. They are being very, very foolish.

“This is only going to rev up farmers and individual organisations. It is certainly not helping the lack of trust between MII and farming organisations.

“If they want to show good faith as farmers have shown by lifting the pickets, they should lift all of the injunctions and move forward. It is a stumbling block that is going to remain until they are lifted.”

In conclusion he said, “It is plain to be seen who is really and truly to blame for all of this today. I hope common sense can prevail and they will see it is not going to do anyone any good to hold injunctions over two people’s heads.”