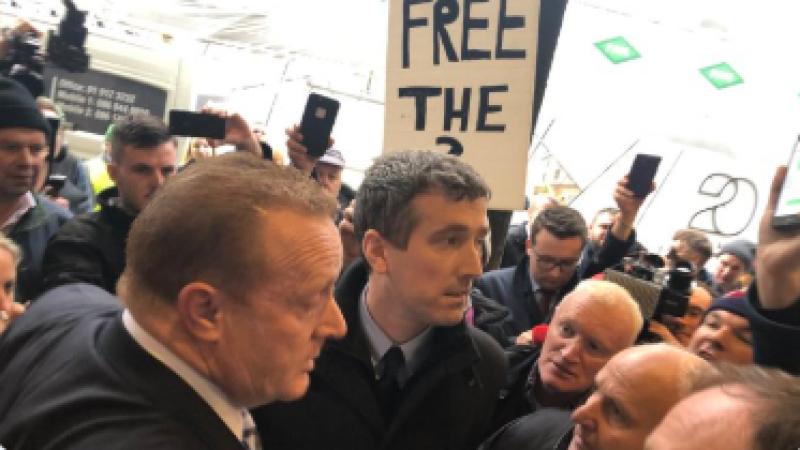 The Beef Taskforce scheduled for this morning, 14 October, has been suspended following altercations outside Agriculture House, where members of the Taskforce were prevented from attending the meeting.

Representatives from Meat Industry Ireland (MII) were blocked from entering Monday’s maiden Beef Taskforce meeting at the Department of Agriculture in Dublin. Farmers, who were unattached to any organisation, were protesting the meeting as they claimed three farmers still had injunctions being held against them. Two of those farmers hail from Longford, one of which is local councillor, Paraic Brady.

Cllr Brady was one of the farmers to confront Cormac Healy, Director of Meat Industry Ireland and other representatives from MII, who left without gaining entry having been jeered and blocked off by farmers. Beef plan movement said the taskforce could not go ahead with legal threats remaining, however, Meat Industry Ireland claim they have honoured the agreement to withdraw all legal proceedings against protesting farmers. Cllr Paraic Brady confirmed to the Longford Leader that the high court injunction against himself and another Longford farmer, remain in place.

Also read: Grass Tetany - Prevention is better than any cure

He said, “It is in the interests of everyone involved in the beef industry that the work of the Taskforce goes ahead.  The Taskforce’s remit is to monitor the implementation of the actions arising from the agreement reached on 15 September and offers  the most viable platform for strategic engagement with key stakeholders.

"It was a great pity that farm representatives were not in a position to air the legitimate concerns of farmers at the Taskforce."

ICSA president Edmond Phelan has said the Beef Markets Taskforce cannot begin its work while injunctions hang over individual farmers. “ICSA decided at an early stage this morning that we could not attend the taskforce while injunctions remain in place.”

“ICSA does not condone physical clashes but the blame for the failure of today’s talks stands squarely with those meat processors who have so far refused to issue letters of discontinuance in respect of certain individual farmers.”

“There is no way these talks will commence until all legal threats have been removed.”