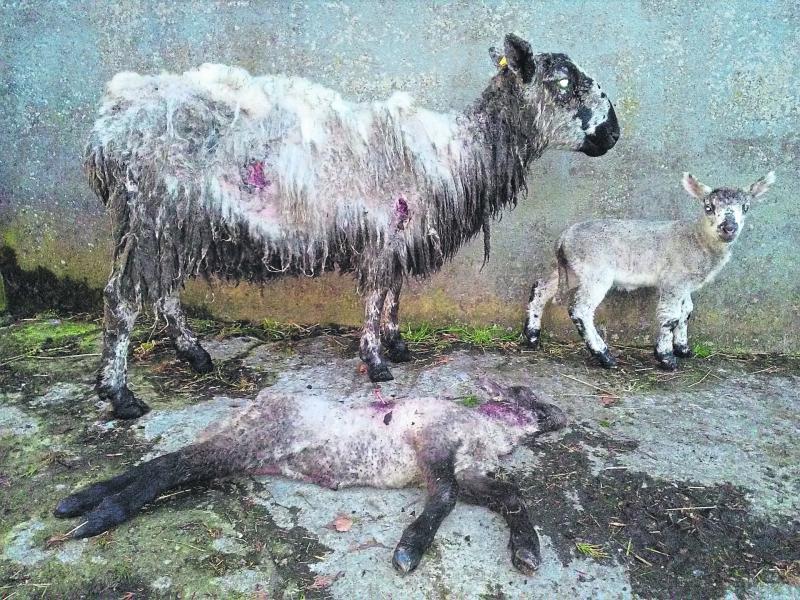 Marauding dogs have wreaked havoc across south Longford for sheep farmers over the last eight weeks with two out of three attacks happening in the past seven days.

On Tuesday morning, April 3 while checking his sheep on the Doonacurry/Ledwithstown border, Ballymahon farmer Luke Casey discovered one of his lambs - from a flock of 30 - dead and its mother seriously injured.

The entire flock he says was subsequently worried and stressed.
“I found a week old lamb dead - its neck and ribs were crushed,” Mr Casey told the Leader.

“The dogs herded its mother over to the pen where they cornered her.
“Scars are clearly visible on her side and shoulder and she is covered in muck after being knocked down and dragged around as large clumps of wool were ripped off her on the wet ground.”

He also pointed out that the sheep were still in shock and didn't eat for a number of days thereafter.

“Sheep are vulnerable to shock, which affects appetite and health and the remaining sheep are disturbed now - the sheep have been worried and are showing signs of stress and now this ewe is unable to support her remaining lamb,” added a frustrated Mr Casey, before highlighting that this was the third attack in the area this Spring.”

It also appears that just a few days earlier, on March 29 a passing motorist managed to prevent carnage when he alerted local gardai to dogs chasing sheep on the farm of Jack and Philomena Farrell.

“The Gardai were swift to respond and have been seen monitoring the area many times since,” Mr Casey said.

“Now it's twice within a week and it's sad to see this cruelty being inflicted on timid sheep and innocent newborn lambs, despite having two previous incidents and visible garda activity.

“Within a space of five days, it certainly doesn't reflect well.

“Every dog has the instinct to kill when allowed wander free.

“They can travel any direction at any time; all dog owners need to behave responsibly and keep their dogs under control at all times.”

Meanwhile, Gardai attended the scene at Mr Casey’s farm but the local farmer is also asking the public to assist where they can.

“The Gardaí are unable to spend all their time monitoring the sheep - farmers are depending on the public to help tackle this blight,” he continued.

“Thanks to one passing motorist who took note, stopped and then took the time to contact gardai, at least one flock was saved from bloody carnage.”
Meanwhile, Kevin Farrell who lives close to Mr Casey continues to keep a close eye on his flock after it was attacked eight weeks ago.

Mr Farrell went to his outfarm at Ledwithstown outside Ballymahon on a Tuesday night back in February only to discover that his sheep had been attacked by marauding dogs.

Following that onslaught, one animal was dead and another was so severely injured she later had to be put down.

As the local sheep farmer said, the most troublesome aspect was the fact it was lambing season and his sheep were close to ewing.

“I went out to check them on the Tuesday night - one sheep was dead and then I discovered another one that was torn,” he said, before pointing to the fact that the rest of the flock was worried and frightened.

“In fact the sheep were that frightened after the attack, they didn’t eat afterwards for three or four days.”
Meanwhile sheep farmers across the county continue to watch their sheep carefully.

“It is an awful thing for a farmer going out at this time of year to find his sheep in drains or dead in the field,” said Mr Farrell.

“The Gardaí are keeping an eye on the situation now, but unfortunately it is happening all the time.

“Dog owners are just not keeping their dogs in; people say their dog won’t attack sheep but they will.”