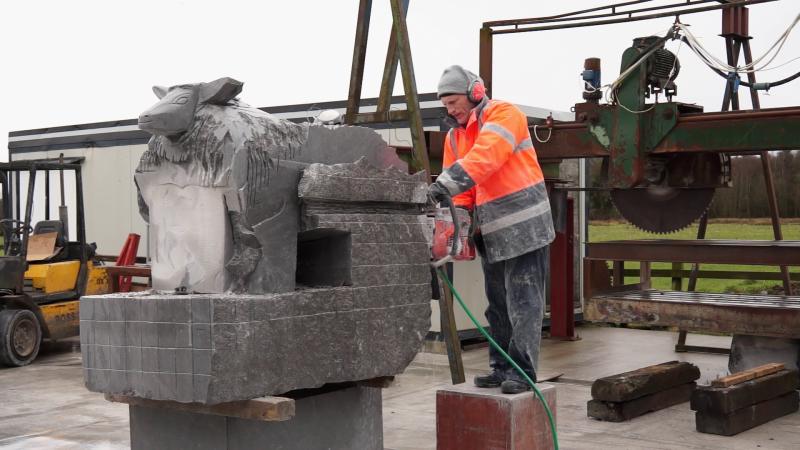 Sheep farmers in Longford across the west and midlands are this week asked to select their best commercial ewe and twin lambs for inclusion at a special sheep sale at Roscommon Mart on Wednesday, April 26 where they will be in with a chance of winning the Oliver Burke Memorial Trophy.

The perpetual trophy, which is carved from Lecarrow limestone by local sculptor Mark Feeley will be presented to the owner of the best ewe and twin lambs in the sale. The trophy commemorates the contribution of Oliver Burke, former CAO of Teagasc in Roscommon to the Roscommon Lamb Festival. There is a cash prize of €100 for the winner with 2nd, €75 for 2nd and €50 for third.

Wednesday morning will also feature the unveiling of a life size sculpture of a Roscommon ewe and lamb, which will be put on permanent display in a central location in Roscommon in coming months. The sculpture is currently being worked on by Mark Feeley, who is using local limestone for the commission. A crowd funding initiative with a target of €5,000 has been set up to fund the commission, with donations being made from Roscommon people all across the globe

The event in the mart on Wednesday morning will also feature the festival launch, which will be performed by IFA President Joe Healy. Music for the event will be supplied by the King Street Bluegrass Band, who are travelling from Virginia, USA, for the weekend event.

Other items of farming interest during the festival include a Farm Walk on the sheep farm of Willie John Fitzmaurice in Athleague, a special farmers’ market for artisan food producers including a sheep cheese stand from Sheridan’s Cheesemongers Galway, Macra events and international sheepdog trials.

The launch of the All Ireland and All Nations Shearing and Wool Handling Championships will take place in the town Square on Sunday evening at 7pm.

On the social side, highlights include a street party on Saturday night in the Square and a family fun day in Loughnaneane Park on Sunday. For further information, see www.roscommonlambfestival.com