From Dallas to Longford: Bia Deas staff thrilled to meet Patrick Duffy - 'He's so down to earth, for a superstar like that' 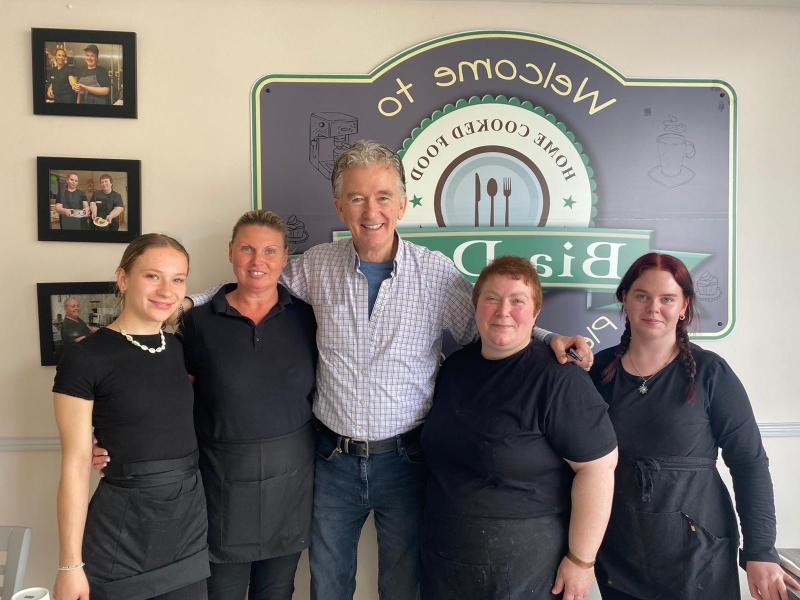 Bobby Ewing may have been the younger brother of the dastardly JR in hit TV series Dallas, but he was the heartthrob that sent female pulses racing through the late 70s and up to the early 90s.

The decades of entertainment success have not diminished his star qualities.

“On Friday we had a visit from Patrick Duffy, aka Bobby Ewing,” Judy Kenny from Bia Deas told the Leader of their celebrity visitor.

Judy continued, “He, his partner and their crew were doing a documentary on his roots in Mayo.

“They were just passing by and they came in.

“They hadn't intended to stay, but when they had a look at the place they liked it, so they sat down and had cappuccinos and scones.”

Duffy and his Happy Days star partner Linda Purl's are visiting Ireland to trace his Irish roots and to film a pilot episode of a new TV series due to air in the United States in 2023.

The TV series, with the working title of Finding Ireland, will shine a spotlight on Ireland, from the rich culture to the spectacular scenery.

Judy says Patrick and Linda made a great impression, “They were real down to earth people. You would not think they were stars at all.

“Orla [Clyne] brought them in and showed them to their seats. She then asked me if I knew the man, and I knew straight away that it was Patrick Duffy.

“Orla went up and had a chat with him.

“She said 'I don't mean to interrupt you while you are eating, but are you Patrick Duffy, Bobby Ewing out of Dallas, we are big fans?' he said 'I am'.

“Before he left he came up and shook hands with everyone, he had a photo taken with us, he chatted to us and introduced us to all the crew.

“He explained he was in Ireland tracing his roots. He's so down to earth, for a superstar like that. It was a bit of excitement for us on a Friday in Edgeworthstown.”

On Thursday, Duffy visited Kilmovee, Co Mayo where he met some long-lost cousins.

Of the trip he said, "It seems that just about everybody around here carries the surname Duffy."