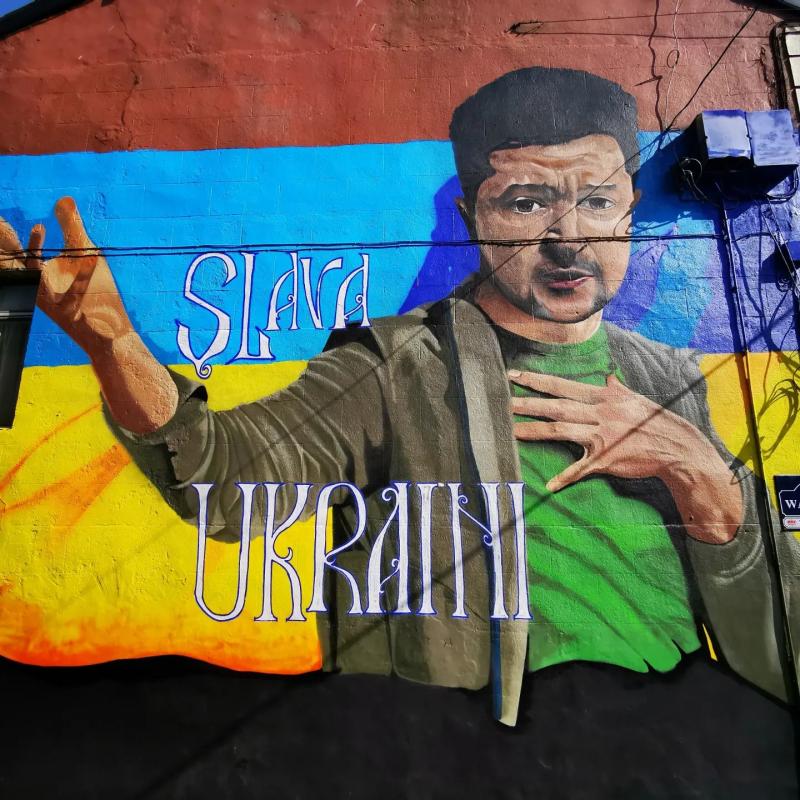 As Ukrainian refugees continue to arrive in Ireland, and the Irish people continue to support and welcome them, one Granard businessman went the extra mile to show his support and commissioned local artist Phil Atkinson to paint a mural of Volodymyr Zelensky on the side of his Granard town-based premises.

“It was Patrick Durkin who contacted me about doing a piece,” Phil told the Longford Leader when asked about his latest work of art, which has received national attention, with RTE posting it to Instagram.

“He had different venues in mind before settling. He’s taken in maybe six refugees so he said it would be nice to have this mural to welcome them to Granard.

“It was Patrick who wanted a portrait of Zelensky and he asked if we could incorporate the Ukrainian flag, so I put a composition together and sent it to him.”

The mural, which is painted on Water Lane, on the side of Durkins Medical in Granard, shows Ukrainian President Volodymyr Zelensky standing in front of the country’s flag with the words ‘Slava Ukraine’ (Glory to Ukraine).

It took approximately two days to complete and Phil has shared a number of progress pictures on his Facebook page, @PhilAtkinsonArt.

“Zelensky has gotten a mixed reception - some people love him and some don’t, but he did stay behind and fight with his people. He didn’t turn and run,” said Phil.

This past weekend, as Russian troops moved out of Kyiv, aborting their attempt to take the Ukrainian capital, the true brutality of war was revealed with the discovery of civilian remains in mass graves or left where they were killed.

Phil’s mural in Granard stands out as a symbol of solidarity for those who are suffering in wartorn Ukraine, as well as support for the Ukrainian families that have arrived in Granard.

“For me, it was about the Ukrainian people. There are a lot more civilians being killed now, so it was more in solidarity to them than a highlighting of Zelensky,” Phil explained.

So far, the commissioned artwork has received a positive reaction, he added.

“We had a lot of positive comments while I was painting it from the people in Granard,” said Phil.

“RTE shared it on Instagram and obviously you’ll get negative comments but I was happy it did get a positive reaction and I was happy to be painting it.”