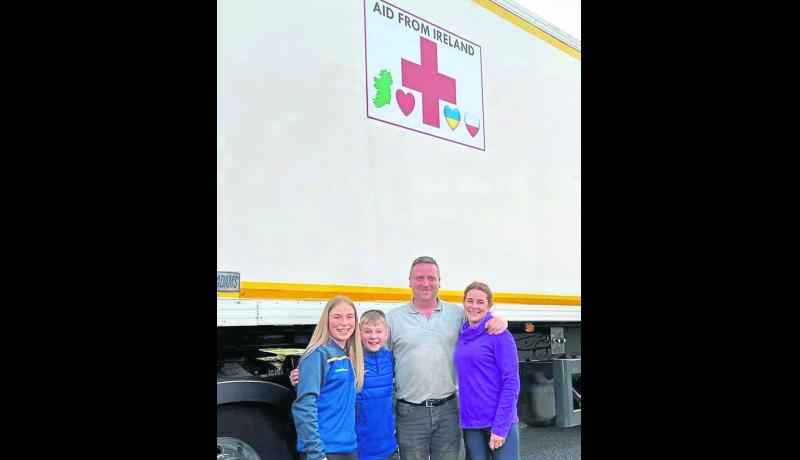 A north Longford haulier has told of the “shocking” scenes he witnessed while delivering a truck load of medical supplies to war torn Ukraine last week.

Norman Hall is currently en route back to Augnacliffe following a week long trek across Europe as the world continues to rally around the beleagured eastern European state.

The 44-year-old businessman said the images he encountered would live long in the memory.

“What people see on the television isn’t nearly a quarter of what is going on. You couldn’t show half of the stuff as it’s that shocking.”

Those insights come amid calls this week for Russia and its president Vladimir Putin to be held accountable for alleged war crimes.

Shocking footage, pictures and reports have emerged of civilians, some with their hands tied behind their backs, with signs of torture and having been shot in the head, as well as mass graves being discovered.

A regular participant in raising money for local charities, Norman said he didn’t flinch at the chance to get behind an ever increasing humanitarian effort that has gripped the hearts and minds of much of the watching world

“I would always be doing stuff for charity and I remember looking at the television one night and I saw how these people were in need and I just put my hand up to go,” he recalled.

Accompanied in convoy by Ballygar man Gearoid Kelly, a large chunk of the supplies collected by Norman were donated from Mullingar’s Midland Regional Hospital with the local haulier’s truck also carrying a large consignment of beds.

In a further revelation, Norman revealed how he and his Galwegian companion were among a chosen few to step foot in a country which is still feeling the effects of close to six weeks of incessant warfare.

“I arrived last Friday and we were the only two hauliers to go across the border into Ukraine,” he said, adding the pair eventually ended their gruelling 2,000 mile expedition by arriving in the western Ukrainian city of Lviv.

“I am surely wrecked,” said Norman, as he reflected on spending the past week in the cab of his 40ft artic lorry.

“The most I would usually be staying away would be one or two nights and I am in this over a week now.

“I suppose though it’s one of the things you will never get the chance to see or do again.”