INTO snapshot survey: 1.9% of pupils in Longford sick with Covid-19 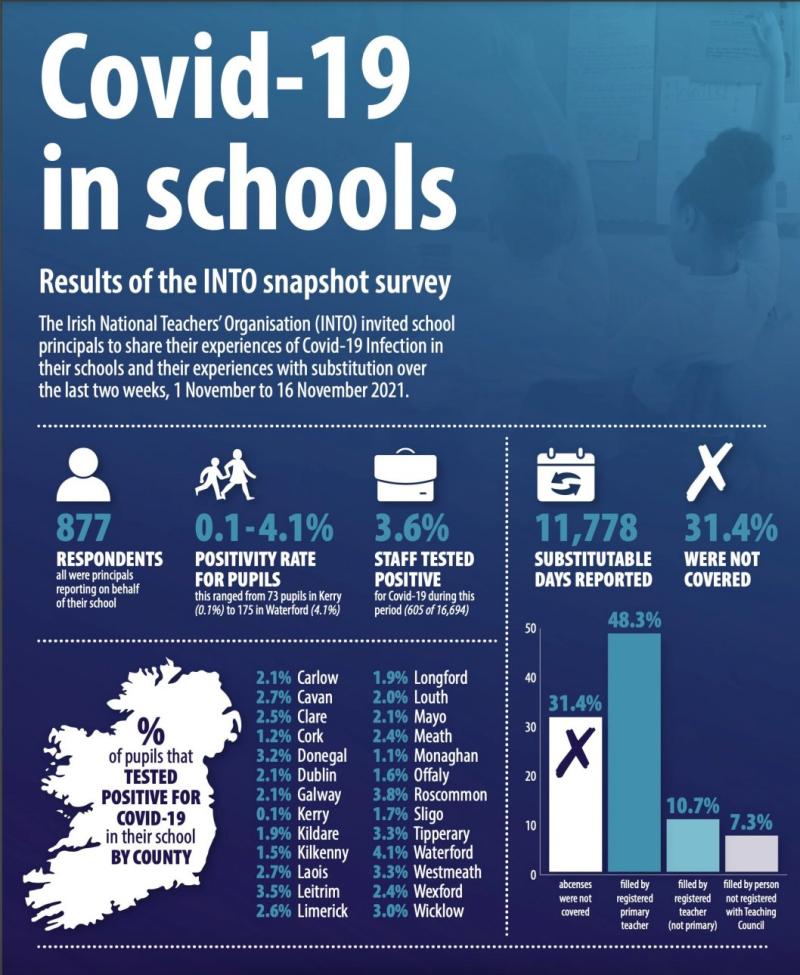 INTO snapshot survey: 1.9% of pupils in Longford sick with Covid-19

1.9% of pupils in Longford are sick with Covid-19 according to a snapshot survey of 3,100 school principals across the country conducted by INTO from November 16 - 18 to assess the level of Covid-19 infection they were aware of in their school community and the extent of the substitution crisis.

Key findings from the snapshot survey are as follows:

(*This snapshot survey sets out only the cases known to principals in a sample of schools across the country. ) 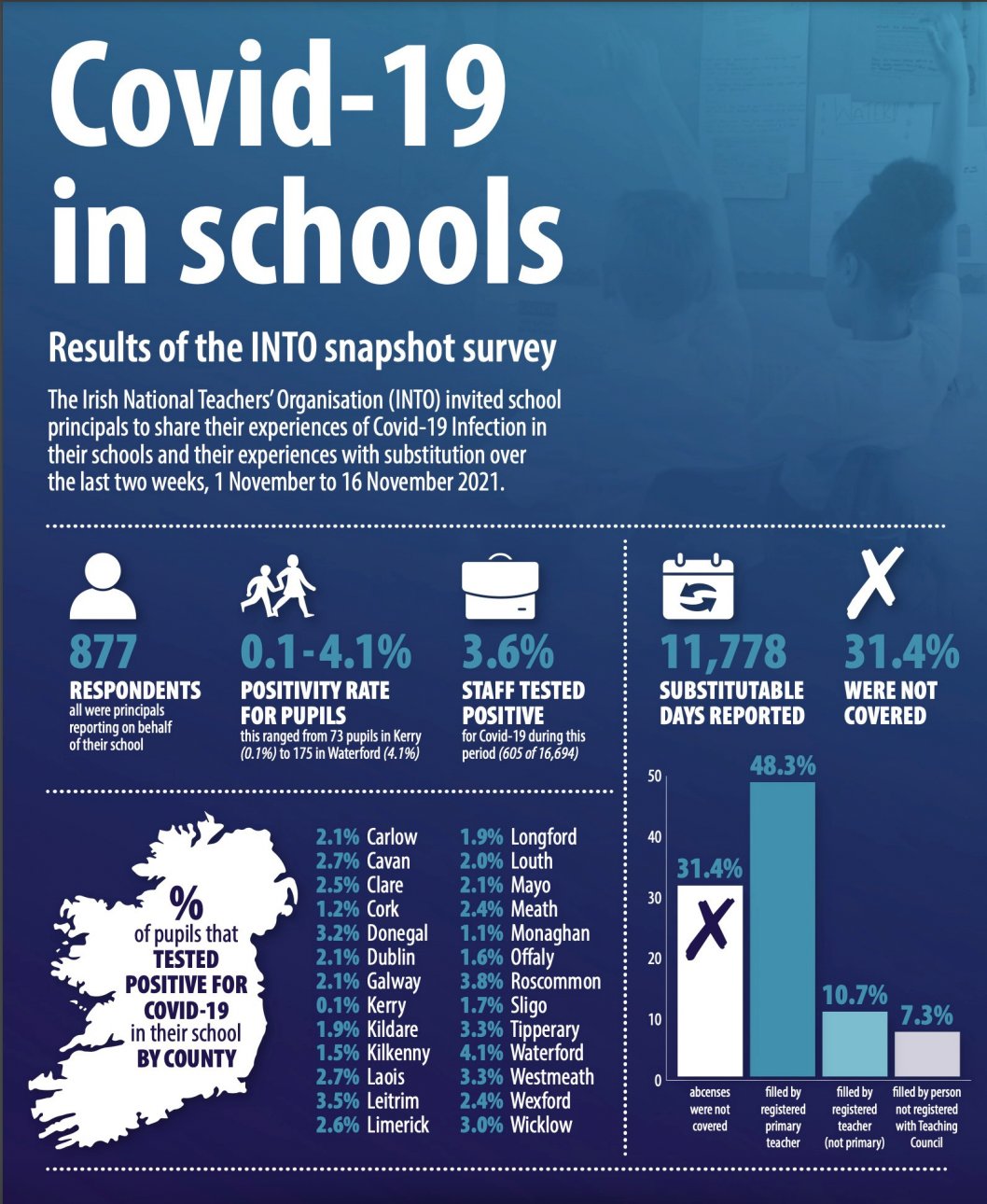 Responding to the findings of the survey in respect of Covid-19 infection in primary schools, INTO General Secretary John Boyle said:

“Our snapshot survey shines a light on a primary education system that is creaking at the seams. Soaring transmission levels are an indictment of the premature removal of testing and contact tracing from our primary schools, and of the frustrating failure to move quickly to deploy antigen testing. The cessation of public health risk assessments following primary school outbreaks, and the resulting unavailability of weekly reports detailing infection levels from 27 September, has concealed the escalation of positive case numbers among pupils and staff in primary schools. It simply cannot be a coincidence that the number of 5–12-year-old children contracting the virus has trebled since crucial public health supports were removed from the primary sector less than two months ago, abandoning teachers and principals to protect themselves and their unmasked, unvaccinated pupils from the impact of the highest wave of infection in their schools since the pandemic began.

The results of the survey indicate that a significant number of school staff (605 staff members in 877 schools that responded to the survey) contracted Covid-19 in recent weeks. This contrasts starkly with the extremely low level of infection among adults in schools that had been reported in official data on schools’ mass testing prior to 27 September and challenges the narrative that Irish primary schools are low risk environments.

This union’s view is that the recent statement from the European Centre for Disease Prevention and Control (“sharing a classroom can be considered a high-risk exposure” – 28 October 2021) must be taken seriously by the Irish government if we are to sustain schooling in the coming months. The government must do everything in its power to minimise the risk of exposure in every primary school classroom.

The INTO calls for an immediate review of the Covid-19 response plans for primary and special schools to address the upsurge in infection levels manifest since the delta variant took hold in school communities.

The fast-tracking of the booster vaccine programme and the provision of vaccines for children aged under 12 will be essential to support the primary education system in the coming months.

Government must also ensure that HIQA publishes another review of the minimum age for the wearing of face masks, as promised in HIQA’s last report which was submitted to NPHET on the 24th of August and released on the 20th of September. It is entirely appropriate that the union representing workers who teach the largest cohort of unvaccinated and un-masked individuals in over-crowded and often poorly ventilated settings be consulted by HIQA on the issue. The provision of more air quality monitors and air filtration systems to primary and special schools would greatly assist our schools.

INTO reiterate our view that it is now incumbent on public health to recommend additional safety measures designed to drive down transmission levels to properly protect those who work in primary schools and their pupils.

From now until Christmas, clear and consistent public health messaging, scaled-up public health mitigation measures with a renewed emphasis on improving air quality, increasing social distancing, limiting congregation within and near school facilities and a willingness to respond quickly are essential if we want to ensure that schools can operate safely for the next month.

The INTO remains resolved to work constructively to tackle the crisis with the Department of Education and primary education stakeholders, but the absence of public health support makes our task to limit further opportunities for transmission of the virus and our attempts to minimise disruption in schools bigger and more difficult by the day”.

Reacting to the data collected on the scale of the substitution crisis, INTO General Secretary John Boyle said:

“INTO has been warning about a looming substitution crisis for years. Until such time as all schools in the country have access to a well-resourced supply panel, this crisis, which has been exacerbated by the number of teachers who are on leave because of Covid-19, will continue.

The INTO believes that the increasing infection levels among staff could have been avoided had the government heeded our calls for the continuation of the mass testing, tracing and risk assessments that served our primary schools so well during the last school year.

It is imperative that the recent commitment by the Minister for Education to engage with the education partners to find solutions to address the substitution crisis is acted upon swiftly.”

The Clancy siblings Peter, Sheila and Mike, founders of Lough Ree Distillery in Lanesboro, have recently added to their portfolio of products with their first blended whiskey, Bart’s.