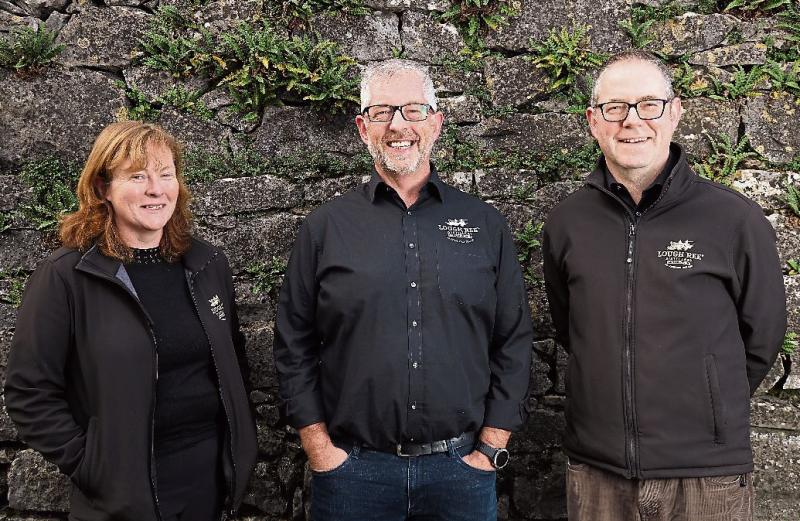 The Clancy siblings Peter, Sheila and Mike, founders of Lough Ree Distillery in Lanesboro, have recently added to their portfolio of products with their first blended whiskey, Bart’s.

CEO Peter Clancy explained the rationale behind it.

“We’ve created Bart’s primarily in response to demand from our international customers – we’ve had a number of successful whiskey releases under The Bridge series going back to Christmas 2019,” he said.

“Each release is an entirely different whiskey, and limited to a single cask, so depending on the cask size, that’s anything from 200 to 750 bottles. At this stage, all our releases pretty much sell out in the domestic market between collectors, followers and trade customers, and so we needed to add a core product to our portfolio which we could have in sufficient volume to develop export business.

“There’s huge demand for Irish Whiskey globally, and in setting out to create Bart’s we took soundings from our distributors in places like Belgium, Germany and Italy as to what would be distinctive in those markets. That formed the basis for decision to release a blended Whiskey.”

Michael Clancy, Chief Technical Officer said “We set out to create a distinctive blend which would add to the Irish Whiskey category. We started with classic grain whiskey, adding a large amount of pot still whiskey to give texture, spice and mouthfeel.

“Then we layered on malts with oloroso sherry and rye cask finishes and finally some peated whiskey. It took numerous iterations to get it right and we took counsel from a tasting panel with some of the best palates in the industry, before we finally settled on what’s in the bottle today.

“We call it a complex blend as we have five different elements in there all perfectly balanced. We’ve been receiving rave reviews for the whiskey from trade and private customers alike since we’ve launched.”

Sheila Mullen, the company’s CFO described how the name came about.

“Creating the whiskey is one element, and while you’re working on that you also have to create the brand and find a way of connecting the product and the brand together,” she said.

“Looking back on the journey we’ve been on with the business to date, we’ve obviously missed our late father Bart’s influence as he passed away before we ever started this business.

“He would have loved so many elements of it – from the copper stills to the wood in the casks to the distillery design. So, we decided to call it after him as our way of involving him in the business going forward, and as a tribute to his legacy.

“We feel privileged really – it’s not many people ever get the opportunity to put their father’s and family name on a product which is already getting traction internationally.

“Marrying the brand story and the product together was actually straightforward. Our dad had a tremendous interest in clocks – anyone who knew him will know he was a great man to solve a problem, and to him the clock was the ultimate technical puzzle.

“Each piece, large or small has a role to play in the clock working, and Dad would spend hours fixing old clocks, making new parts for them and painstakingly reassembling them and getting them to keep perfect time.

The packaging for this product has won great praise due to the innovation it brings to the category. Firstly, it is packaged in a bottle that is approximately 40% lighter than its competitors, with a consequent reduction in Carbon Footprint.

Secondly, it lists the blend components on the label in detail, which is class-leading in terms of transparency.

Finally, this is the first Irish Whiskey to carry the new e-label QR code jointly developed by the European Wine and Spirits industries. This e-label provides detailed information on ingredients, nutrition and sustainability to consumers in every European language.

Bart’s Irish Whiskey is available directly from Lough Ree Distillery on www.lrd.ie and from all leading off-licences and wholesalers.