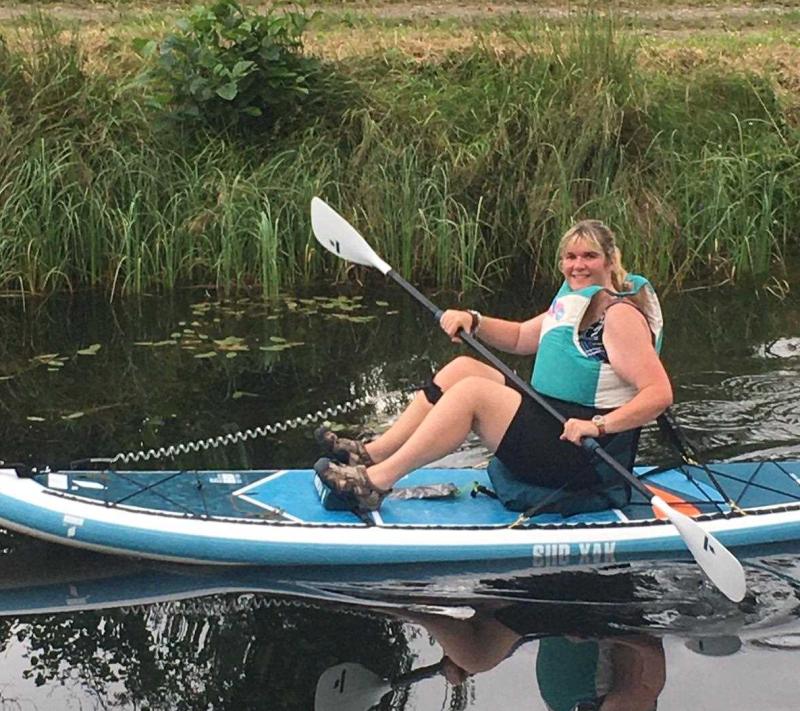 Barbara Dowling, a proud 52-year-old Kerry woman, living on Saints Island, Newtowncashel with her husband Paul, son Oisín and dog 'Tuppence' had her world turned upside down in July ’19 when her doctor sent her for medical assessment or as she says herself an NCT.

What was supposed to be routine tests turned into immediate admission to Portiuncula and an eight-week stint in three hospitals, Portiuncula, University Hospital Galway and Beaumont.

Barbara was diagnosed with an inoperable brain tumour, MS and thyroid cancer. Following treatment, two years on Barbara has been declared as cancer free.

As Barbara says, ”to look at me I look healthy but medial tests tells a completely different story. My Physio, David told me I spectacularly failed the balance test and that I was 100% falls risk and that I had jelly legs.”

In June 2021, two canoes entered the house on Saints Island and while the two men in her life were having a ball she was left to watch only.

Barbara could get into the canoe, but she could not get out due to the jelly legs.

A sit-on kayak was suggested and on the first of July Barbara went onto the water for the first time and since then has not looked back.

Barbara, a classical clarinetist and peripatetic woodwind teacher who had the honour of been the first female to serve in the band of the Western Command, approached Brain Tumour Ireland to see if they would be interested in benefiting from a concert that she was planning to put on.

The concert would have an orchestra of over 200, choir of over 400, four conductors and all musicians and singers giving freely of their time. As well as Ireland the same participants are travelling from America, Spain, Denmark, France and the UK. There will also amateurs, and professional musicians from RTÉ orchestras, Army bands, Garda band and the BBC.

The biggest surprise is that the concert is not taking place at Christmas but on June 22, 2022 in the Waterford Institute of Technology Arena.

Putting on the concert will cost in the region of €5,000 and Barbara is determined to raise the funds needed so that all monies raised from the event will go to Brain Tumour Ireland.

It would be especially great if a sponsor could come forward hence the money from the fundraising to pay for the event could also go to BTI.

Barbara as part of her fundraising is going to paddle the length of Lough Ree (32km) on Saturday, September 25 (weather permitting).

If you wish to sponsor the event you can contact Barbara at irishchristmasinjune@gmail.com

Down Memory Lane | Recognise anyone in this gallery of photographic gems from 1999?

Farm Safety: Husband and wife have near miss with slurry fumes
ADVERTISEMENT - CONTINUE READING BELOW