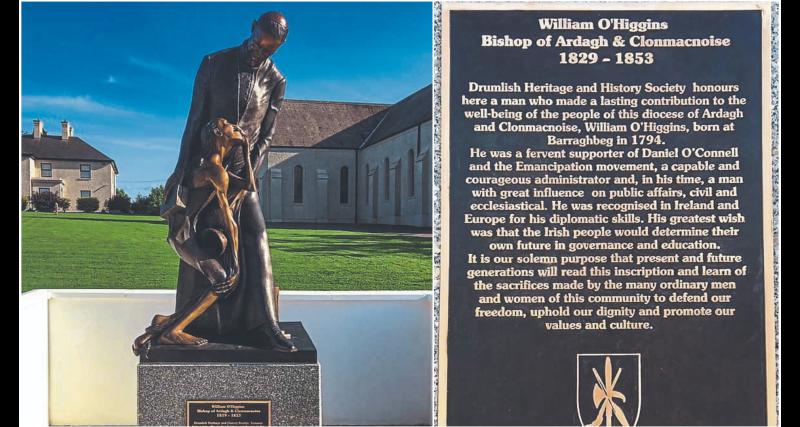 On Saturday, August 28 next at 2pm, Francis Duffy, Bishop of Ardagh & Clonmacnois will lead a ceremony of dedication, at the Bishop William O’Higgins statue, that was unveiled in Drumlish in September of last year under very restrictive Covid 19 regulations.

The statue of O’Higgins was sculpted by the internationally acclaimed Dublin born artist, Dony McManus.

William O’Higgins was born at Barragh Beg, Drumlish on the 1st August 1794 four years before the Battle of Ballinamuck. He died on the 29th January 1853. His remains were buried in Ballymahon and fifteen years later on 11th February 1868 were transferred to Longford and reburied in the crypt of the cathedral.

Were ‘fleeing’ Derry city when they were ‘ambushed’

The actual place of interment was not marked and there is no explanation except that one writer says that ‘possibly it had been the intention that a monument worthy of the founder would be erected but never was’ - St Mel’s Cathedral A Glorious Undertaking, May 2015.

The major issues of the time were the Tithes and the Repeal of the Act of Union. Tithes were by law to be paid by tenants, most of them Catholics, for the support of the clergy of the Established Church, the Church of Ireland. Religion combined with politics led to nation-wide resistance and the Bishop threw himself wholeheartedly into the fray, preaching, writing, and petitioning the British Parliament. The law was changed in the late 1830s to impose the charge on the landlord class, but he had made many enemies and was not forgotten by them.

The other issue was the movement set up by Daniel O’Connell to repeal the Act of Union, which had made Ireland part of the United Kingdom, without a Parliament of its own. He took a full part in this movement also, making fiery speeches in support of O’Connell.

“I for one defy any Minister of England to put down the agitation in the diocese of Ardagh. ……we will prepare our people for those circumstances and if for that they string us to the scaffold – in dying for the cause of our country we will bequest our wrongs to our successors."

His words attracted outrage in the British press of the time and were remembered by them up to the date of his death and long afterwards. The Repeal movement was peaceful, but the British government were alarmed at its growth and strength – and took measures to suppress it.

At the same time, he was going ahead with his plans for a Cathedral for the Diocese and its foundation stone was laid in 1840 in the presence of an estimated 40,000 people.

In 1846 the potato crop, often the only food available to the rural poor, was struck by blight, his dioceses being one of the poorest and least able to bear the burden of it meant that work on the cathedral ceased and the monies collected for it had to be diverted toward feeding the hungry. In 1847, when the Famine was at its peak, extracts from a letter he wrote to the Irish College in Rome showed the plight of the people and the strain he was under.

“Of course, you have some idea from the papers of the state of the poor in Ireland……It would sicken your heart to see those of our people who, up to this have escaped death. ……… We have in this Diocese five Poor Houses and the average deaths in a week are beyond 100 persons in each. In some instances, particularly in Leitrim, whole families arediscovered to be dead in their cabins…….”

He was also a leading light in a fight by the Irish Bishops to prevent the British Government from establishing a University system in Ireland to be known as the Queen’s Colleges.

On Saturday, August 28, the people of Drumlish and surrounding parishes can come together safely to celebrate and dedicate with Bishops Francis Duffy and Colm O’Reilly this great Churchman and Leader of men –

Light refreshments will be provided on the day and all are welcome -.