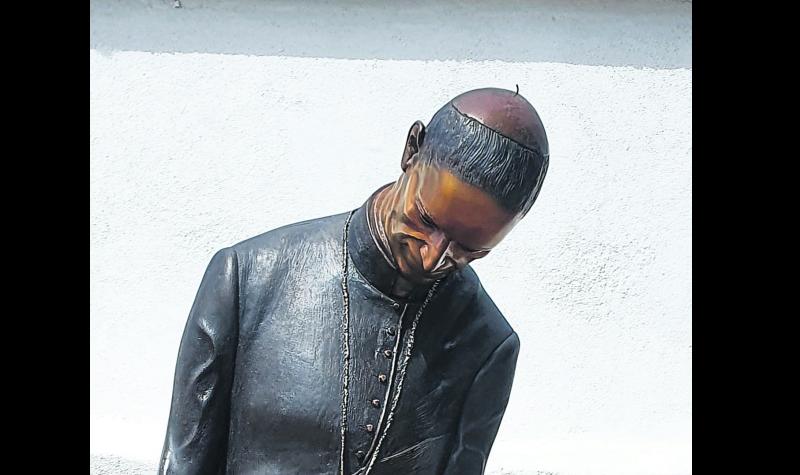 A statue of Bishop William O’Higgins by the internationally acclaimed sculptor Dony McManus will be unveiled in Drumlish on Saturday next, September 19 at 3pm.

His father was from Mayo – coming to Longford while very young.

His mother was from Colmcille parish.

He got his early education from his mother, who taught him Catechism, English and Irish. But that would only be a part of his early formation.

The Rising of 1798 would be deeply impressed on the mind of the young boy. He once said that in the aftermath of the Rising the ‘cries of the croppies’ could be heard as they were routed and slaughtered by the English forces.

Those images would form his vision of the world, one in which the poor had no voice, and especially in his native land where the Irish Catholic had no rights, no freedom and no justice. As Bishop he would become a voice for the poor, the dispossessed and the rights of tenants.

He personally recalled that he had attended many schools in his native district, including one at Drumsna, Co Leitrim, and one in Cloonback, forerunner to the Latin School at Moyne.

It was known from its Classical Education as a ‘finishing school’, run by a Master Mulligan, held in high esteem for his teaching abilities. Having completed these studies by 1812, he was accepted as a Clerical Student for the Dioceses of Ardagh and Clonmacnoise, and began studying for the priesthood in Paris at the newly-opened Picpus Seminary, where he was a brilliant student. He had no financial assistance, meeting all costs himself.

Spent eight years in France
In France, he spent 8 years witnessing many historic events - in 1815, the triumphant return of Napoleon from Elba and his return to Paris after defeat at Waterloo. In his diary he recorded presenting himself to the victorious Duke of Wellington and congratulating him on his victory.

But the young man sought the re-opening of the Irish College in Paris, closed from the time of the Revolution. The endeavours of him and his friends were rewarded; the College was reopened.

At this time O’Higgins met fellow Irishmen who followed Wellington to Paris, including an O’Neill from Carrick-on-Shannon, Malachy McGarry and Peter Creegan from Drumlish, Owen O’Reilly from Monaduff and an O’Reilly from the Rocks of Bohey.

He continued his studying at the Sorbonne – theology, sacred scripture and science. In 1817 he was ordained a priest and in 1818 obtained his MA and first place in the Bachelor of Divinity (BD) exam.

He now held the chair of English at the Irish College and was Professor of Theology. The strain of work weakened his health and in 1821 he had to leave and move to teach at the University of Vienna. His health still causing him problems, he went to Rome. He would spend 5 years there, completing a Doctorate in Divinity. While attending lectures he taught at various colleges, lecturing in philosophy, theology, scripture and canon law.

Following the death of Bishop Magauran, he was consecrated Bishop of Ardagh at Ballymahon on November 30, 1829.
The people of the diocese were for the most part small farmers struggling under the demands of harsh and unscrupulous landlords - rack rents ate into their meagre incomes and they were forced to pay tithes for the upkeep of the clergy of the Church of Ireland. The Bishop led in urging the people to resist payment.

He was a man of strong views, a supporter and friend of O’Connell, then at the height of his powers. The unjust laws which had the Catholic people in bondage and serfdom had to be undone.

The Repeal movement was peaceful, but the British government were alarmed at its growth and strength – and took measures to suppress it.
At a meeting in Mullingar O’Higgins said:
“I for one defy any Minister of England to put down the agitation in the diocese of Ardagh. ……we will prepare our people for those circumstances and if for that they string us to the scaffold – in dying for the cause of our country we will bequest our wrongs to our successors.”

He was viewed as a threat to authority, and would be closely watched. The speech brought the wrath of the British press on his head.

He established classical schools at Ballymahon, Longford, Athlone and Drumlish.

His dream was of a diocesan seminary for the secondary education of youth, especially those aspiring to the priesthood. However, such a school would be built by his successor.

In 1848 he and other Bishops fought a proposal by the British government to establish third-level ‘Queen’s Colleges’ in Ireland, eventually obtaining a Papal decree condemning them.

Dr O’Higgins set his heart on providing his diocese with a Cathedral and the foundation stone, from the ruins of St. Mel’s old Cathedral at Ardagh, was laid on May 19, 1840. Present were 6 Bishops, 120 priests and 40,000 of the faithful.

It was an extraordinary undertaking, especially considering the plight and the poverty of the people. He was fully aware of the sacrifice they would have to make.

The Cathedral was ready for roofing when the potato blight struck in 1846, 1847 and 1848, followed by the Great Hunger.
In a heart-rending letter to the rector of the Irish College in Rome, he wrote;

“Of course, you have some idea from the papers of the state of the poor in Ireland……It would sicken your heart to see those of our people who, up to this have escaped death. ……… We have in this Diocese five Poor Houses and the average deaths in a week are beyond 100 persons in each. In some instances, particularly in Leitrim, whole families are discovered to be dead in their cabins…….”

The death of Daniel O’Connell at this time was painful for him.

He withdrew from politics and devoted himself solely to the relief of his famine-stricken people and the duty of his office.

On January 3, 1853, at Ballymahon, William O’Higgins passed to his eternal reward.

His funeral was held on the 5th and his remains were interred in the old Church there, afterwards to be removed to the Vault of the Cathedral that he founded.

He never abandoned his upbringing or his love for the people of Ireland, and of Longford/ Drumlish.

We can and should be proud of him and the contribution he made – the college in Longford and the beautiful Cathedral now restored and rededicated.