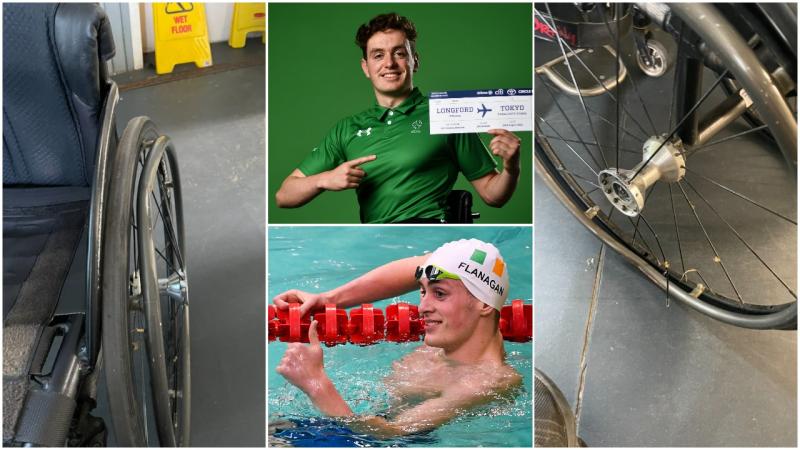 Longford Paralympian Patrick Flanagan has described it as 'unacceptable and degrading' that his wheelchair was destroyed during his flight to the Tokyo Paralympic games.

Upon landing in Heathrow airport yesterday, Patrick, took to the Twitter to say he was 'gutted' to discover his wheelchair had been broken.

"My chair is my independence and to be left in an over sized airport chair is degrading. This is not something that can happen to wheelchair users. It’s unacceptable,” he said.

Patrick explained that the wheels on the chair were damaged to the point they could “no longer spin, along with a lot of other dents and scrapes."

Patrick tweeted: “The staff in Heathrow were extremely apologetic. But unfortunately an apology does very little for me. I was given an over sized airport wheelchair, filled out a claim form and sent on my way. I can barely push myself in this chair and simple tasks like getting around my hotel room are extremely tough. And now I have to fly to Tokyo.

“This is not something that can happen to wheelchair users. It’s unacceptable. Both Airlines and baggage handlers need to pay attention to chairs. My chair is my independence and takes months to be fitted and ordered. Mine is specifically sized to support my back, is light weight so I can lift it in to the car, and is extremely sturdy. It would not be damaged easily.

“I’m gutted to have to start out my Paralympic journey like this but I just can’t wait to get to Japan, join up with the rest of the team and put on a a performance to be proud of.”

There was some small consolation for Patrick when he confirmed that a replacement older chair was being flown out to meet him in Tokyo, but stressed that not all wheelchair users are lucky enough to have a spare.

Thanks to everyone for reaching out this morning. Luckily I’m getting an older chair flown out today. But not all wheelchair users are lucky enough to have a spare. The point remains the same, this should never happen!

For now, #Tokyo we are coming pic.twitter.com/ua4f41aq68

Yday, I landed in Heathrow on my way to Tokyo for the Paralympic Games. My chair was destroyed. My chair is my independence and to be left in an over sized airport chair is degrading. #Tokyo2020 #Paralympics pic.twitter.com/3JfEwnaciZ

Patrick was also represented Ireland at the 2018 Para Swimming European Championships held in Dublin, he missed out on a podium finish by less than two tenths of a second in the S6 freestyle 400m.

He was the proud recipient of the Swim Ireland Disability Swimmer of the Year award in 2012. A former member of Longford swimming club he also trained and completed at collegiate level with UCD where he is studied Economics and Finance. Patrick now trains with his colleagues Ellen Keane and Nicole Turner at the NAC Swim Club. Patrick has Spina Bifida.