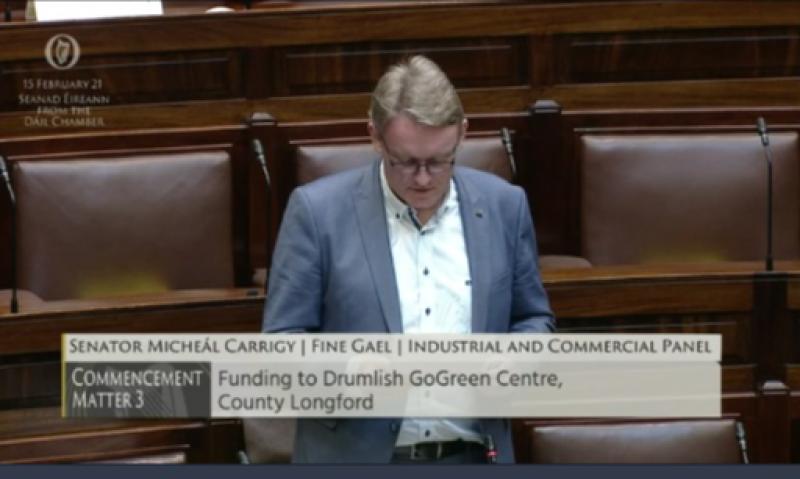 Speaking in the Seanad, he asked that this project be prioritised for funding by Government.

Senator Carrigy outlined, “Significant consultation has taken place over the last number of years starting with the establishment of the Town Team by Cllr Paraic Brady which led to the forming of Drumlish/Ballinamuck Area Development Group.

Also read: Positive response to ‘free taxis for over 70s initiative’ to help get Longford people to Covid-19 vaccination centre

“The core objective of this flagship project is on developing Drumlish as a competitive, low carbon climate resilient and environmentally sustainable town and through the redevelopment of the community centre as a flagship Green Energy Building.

"The redevelopment of the centre emerged as a key priority, along with the need to create economic opportunities for the local community such as a remote working space but also an opportunity for innovation and collaboration.

"The town itself has experienced significant population increases in recent years 58% between 2006 – 2016, however the supporting infrastructure to facilitate the retention of employment in the area has not followed.

"This project is expected to bring five direct jobs in the development and management of the Go Green Centre as well as space for 5 dedicated remote working spaces, additional meeting and training facilities and increased usability for music, dance and art.

"It will be transformational not only for Drumlish but for the wider Co Longford and indeed part of Leitrim and Cavan. The centre is also located next door to the local national school St Mary’s who utilise its facilities."

In reply to Senator Carrigy, Minister Peter Burke stated “All proposals have been planned and developed to meet the key needs, opportunities and expectations of their respective communities, the application process for the fund is competitive in nature.  The application that were submitted in December are being assessed now.

"It is hoped that the Minister Humphrey’s will make an announcement at the end of March or the beginning of April.  I know this is a good project and Cllr Paraic Brady and Senator Micheál Carrigy are doing huge work in articulating its merits in the community and I expect and hope for a positive outcome."

Sign up for the Longford Leader newsletter: Get the latest stories from across Longford delivered directly to your inbox