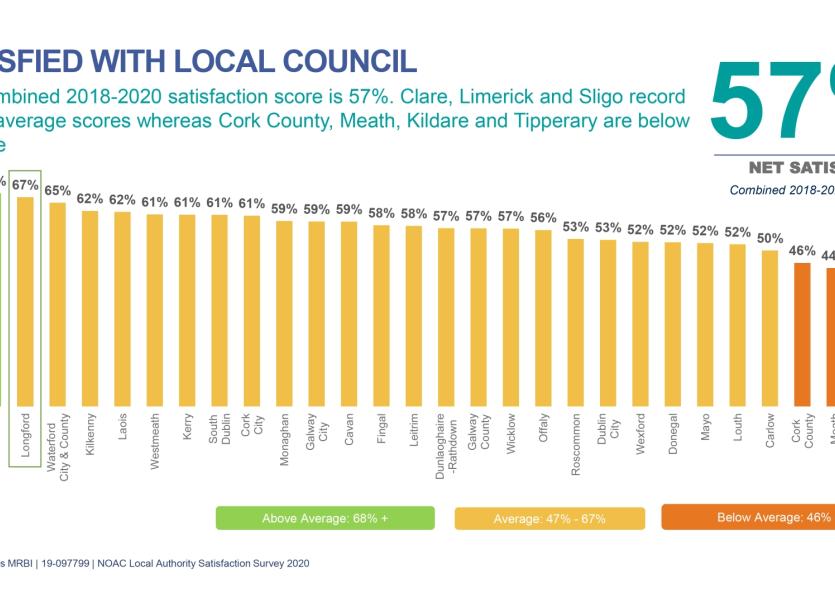 Also read: ‘It was the right decision; life has to go on’, say Longford mothers as kids head back to school

NOAC commissioned research to ascertain the level of customer satisfaction with their local authority.  This research and surveys were conducted over a three year period across all local authorities.

Longford was included in the final phase as one of the 10 local authority areas surveyed earlier this year.

In welcoming the report Chief Executive Paddy Mahon stated: "l welcome the findings of the NOAC Local Authority satisfaction survey. We are always striving to improve the quality of the services the Council is delivering. The findings afford an opportunity to receive feedback on how the Council is delivering on its commitment to serve, lead and represent the communities in our county."

The survey was carried out in three phases and commenced in 2018 with survey conducted in the 10 largest local authorities. In 2019 a further 11 local authorities were surveyed with the final 10 including Longford surveyed in 2020.

The same methodology was used for all surveys with participants in the survey representative of the local authority’s population by age, gender and social class.

Longford County Council was one of the 10 local authorities included in the survey which was carried out in February/March this year.

Longford scored very highly in the satisfaction rating with a 67 % score, fourth highest score of the 31 local authorities surveyed and just 2 % below the highest satisfaction score of 69%.

Cathaoirleach Paul Ross also welcomed the report and commented that "it was particularly noteworthy that 95 per cent of respondents agree that their local area is a good place to live with 89 percent agreeing that they have a strong sense of belonging to their area."

Cllr Ross went on to say this is "reflective of the nature of public service and what the Council is all about’" with the survey findings clearly showing that Councils are making a positive contribution to their areas and services provided have improved over the years.

The key findings for Longford show that :

Whilst survey participants identified roads maintenance, affordable housing and road safety as the most important services, Longford County Council is responsible for the provision of an extensive range of public services to enhance quality of life of citizens in the county.

Michael McCarthy, Chairperson of NOAC in publishing this report said; “a key NOAC function is to review performance and encourage positive improvements in local government services.’’

The report highlights the need for more proactive communication of services and initiatives to the public. Local authorities as public service providers provide almost 1,000 services and are involved in a vast range of activities.  It can be difficult to ensure we always get our message out about all that we’re doing.

The overall satisfaction and perception of the Council is informed by the quality of services we deliver and the many interactions that we have with the public every day across all areas of the organisation and this survey gives some guidance about where we are going right in that respect.

Paddy Mahon concluded that “The survey findings are positive overall and together with the Elected Members we will continue to focus on improving service delivery to all our citizens.’’