‘It was the right decision; life has to go on’, say Longford mothers as kids head back to school 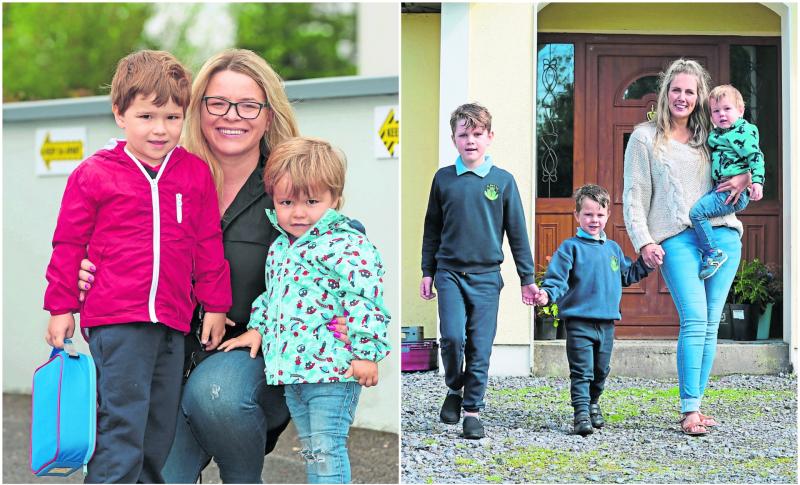 Left: Harry Sharkey on his first day at school with mum Berni and brother Noah Right: Zach and Ben Murphy with their mother Irene and brother Oran

Children across the county are settling into the new school year in very unusual times, but many of Longford’s parents are happy to put their trust in the schools, which have worked so hard to ensure their facilities are safe for all pupils.

Berni Sharkey sent her four-year-old son Harry off to Melview National School last Thursday for his first day of Junior Infants, while two-year-old Noah started at creche on Monday.

“Harry was a bit tearful this morning, after all the excitement of last week when it was all new,” Berni told the Leader on Monday.

“He asked before he went if the coronavirus was still here.”

Harry is the first child in the Sharkey household to head off to school and his parents are delighted that he got to go.

“Of course we were apprehensive and we even debated whether to keep him in preschool. But life goes on,” said Berni.

“We visited the school and there were 15 minute slots set aside for everyone to meet the teacher and look at the classrooms and so the teachers could reassure the kids. They’re doing as much as they can.

“We weighed it up and decided it would be better to get back to normality. Life has to go on.”

Meanwhile, at St Mel’s NS, Ardagh, Zach (8) and Ben (4) Murphy were eager to get back to normality and their mother Irene was glad to get them back to school.

“They needed a bit of normality and socially they need it too - to be with their own little people,” Irene told the Leader on Tuesday.

“And the mammies need it,” she laughed.

Irene was also apprehensive about getting back to school but said that St Mel’s has done so much to ensure the safety of pupils.

“There’s tape up everywhere so they can walk singly to class and there are four classes allowed out together at a time and they have separate places to play,” said Irene.

“For Ben, he doesn't know any different because he’s just started, but Zach noticed very little difference. But he said they get asked to wash their hands a lot.”

The children are very aware of their hygiene, she added, after being at home for so long and being informed about the virus.

“Most of the teachers are wearing visors instead of maskes and I think that’s so much better,” she added.

“The children can see their teachers faces and their smiles and expressions, which is so important for kids.”

Overall, Irene is delighted with the measures taken by St Mel’s to protect her children.

“The school has really done their best,” she said.