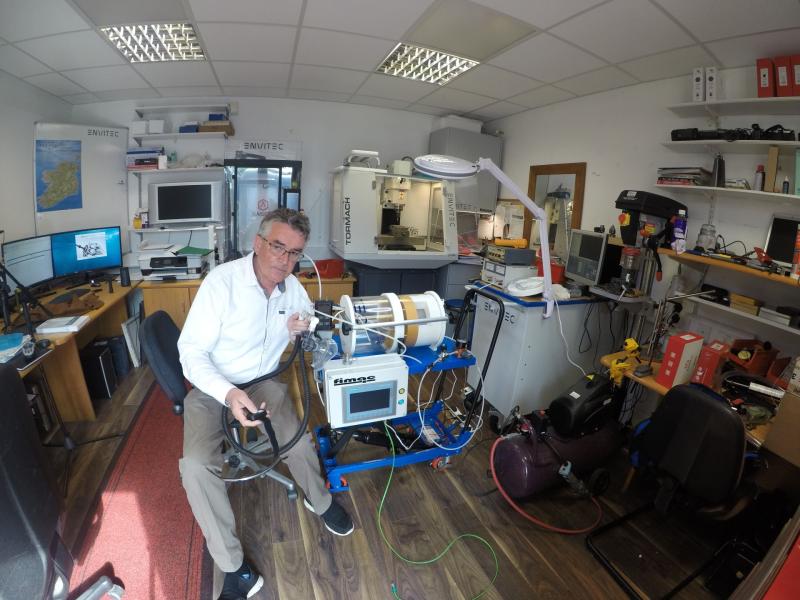 Finian McCarthy with the prototype of his open source ventilator

Since the lockdown began, there are plenty of people in the local community who are putting their time to good use to help others.

One of those people is Finian McCarthy, who is an electronic engineer and the Managing Director of county Longford-based company, Envitec Ltd.

Finian has been making the most of the time at home by designing and building an open source ventilator, which he says can be made cheaply and shared around the world so that others can replicate the design should there be an urgent need for ventilators during the Covid-19 pandemic.

“I knew there was going to be a shortage of ventilators. So what I did was I joined the open source ventilator group - an international group of engineers that are coming up with their own designs,” he told the Longford Leader.

“So I looked at different designs and I took some ideas from what they did in Oxford University called the OxVent ventilator. But what they were doing was fairly complicated, so I tried to simplify the design.”

The idea, Finian explained, was to design something that could be made elsewhere, without the need for too much technology, while still being reliable. And he did it in a short amount of time.

“So I built a prototype. It has to be miniaturised still. The prototype is a large version of it,” he explained.

“I wanted to make it big enough, so that if I made any mistakes, it wasn’t too small. It went together fairly quick. I had all the gear here.”

And it works, he added. Feedback from medical device company Johnson & Johnson was hugely positive.

“They said it was one of the better ones that they’ve seen because I’ve introduced electronics into it that gives you inhalation and exhalation control, where you breathe in at half the rate that you breathe out - so you have control over that,” Finian explained.

“Because the person that’s using it really does need to know what they’re at. You can’t just have one of these simple devices that people are making up.”

Finian and his wife, Mary Gerety McCarthy, are the directors of Envitec Ltd, a Longford-based company which has high profile customers such as Johnson & Johnson Vision Care, who have been the company’s main customer since 1996.

But, while he had all the resources and he certainly had the skillset to put into this project, it was still a real learning curve for Finian.

“I had to get up to speed fairly quickly but there was enough information on the open source site for me to see what others were doing and I had YouTube, which was just brilliant, and there are various papers as well,” he told the Leader.

“But I had the skillset, so why not?”

Finian’s design is going to be put online as an open source ventilator so that anyone around the world who wants to recreate it can do so using 3D models and the software that will be provided. Anyone could make it, provided they have the equipment, including a 3D printer.

“The one that I made is quite large so I’m going to make it smaller,” said Finian.

“The 3D printer that I have is quite unusual - it’s so big. Most of them that they have in schools and education institutions and all that are all small, so when I miniaturise it, there’s a good chance that they’ll be able to make the parts.”

This prototype is all Finian’s own original design but it’s one that has the potential to be beneficial to people across the globe.

“We don’t know what way this is going to pan out - especially in Africa and places like that - countries that can’t afford these ventilators,” said Finian.

A ventilator from a larger company could cost between €20,000 and €30,000, he added; “They’re very sophisticated and very expensive. What I have there, you could do it for literally hundreds of euro or less. It can be made cheaply, basically.”

It’s certainly one way to pass the time during the current lockdown - and a way that could be a huge help to people in need.

“I enjoy doing that kind of work anyway so I didn’t mind doing it,” said Finian.

“It’s cost me a few bob but my company has the resources to do it, so why not? It’s something that’s a bit positive.

“A few people came back to me and said that they thought it was a good effort considering the times that we’re in. Because, you wouldn’t know yet, but it may be huge, you know? And it kept me busy. At least it’s something positive.”

Finian himself is impressed by the number of people around the world who are putting in the effort to do something positive during these difficult times.

“People all over the world all have their own ideas,” he said.

“And then sometimes they’ll give a critical review so that you could see where you’re going wrong. You post up what you’re doing and they’ll come back to you and say maybe there’s a better way of doing it. So it was an eye opener to see what you’d be able to do.

“The internet and the software and all the tools you have now, you can do these things really quickly. Technology is really amazing.”

Read also: Age Action and the Irish Red Cross to offer Covid-19 Hardship Fund of up to €500 to the over 70s