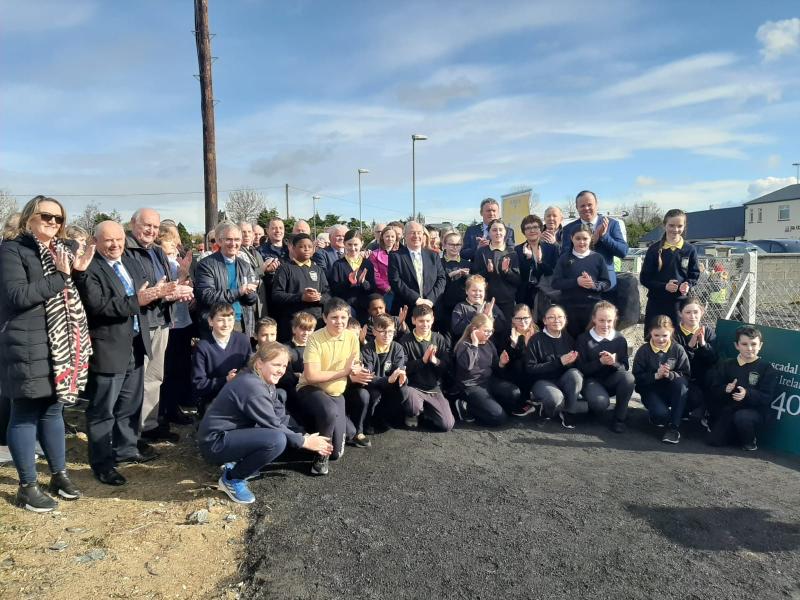 The project was funded under the Outdoor Recreation Infrastructure Scheme, administered by the Department of Rural and Community Development, under Project Ireland 2040 and implemented by Longford County Council Regeneration Department.

Minister Ring was welcomed on the day by the Regeneration department and chief executive of Longford county council, Mr Paddy Mahon, who praised the Minister’s assistance to the county over the past number of years.

“I have to thank and acknowledge his huge, huge commitment and investment into this county.” said Mr Mahon.

Minister Ring, when addressing the large number of attendees, reiterated his commitment to Longford county, pointing to his record over the past number of years.

“I am delighted to be here this morning.” he stated.

“If I am still minister when all of this is negotiated, I won’t be found wanting for Longford.”

Continuing he said: “In two and a half years from my department alone, Longford got €16,934,887. €17m to any county is no small fee and I was proud to be minister that delivered that to Longford.”

Minister Ring praised the work by Longford county council, Cllr Brady and the generosity of local landowners who made this project possible.

He stated: “I want to pay tribute to the people that own the land and that made it available. I want to say on behalf of the government, the community and county, thank you for working with the council and making your land available, because this would not have been possible.

“I want to compliment everyone that was involved and in particular, Cllr Paraic Brady and Cathaoirleach Micheál Carrigy. They put in a lot of work and a lot of pressure on me. If you deliver one thing for Paraic, he wants three or four more.”

The opening of this section of the trail is the first element to be provided off-road. The trail also presents the first phase in the linking of the two ends of the parish of Drumlish and Ballinamuck and providing a safe link for the residents of the parish to access the sports grounds.

The launch of the Drumlish Ballinamuck Integrated Action Plan also took place on the day, a plan developed by the local community for the improvement of the local area under the headings of social, economic and physical development. The plan identified a number of priority actions and projects, including the development of a walkway/cycleway from Drumlish to Monaduff sportsground, to support safe access for people wishing to utilise the sports facilities at Monaduff GAA grounds.

Minister Ring said of the plan: “A lot of work was put into the Drumlish Ballinamuck integration plan and all I can say is, I know you have a lot of plans in here from 2018-2022. You have started the work but there’s a lot more to be done.

“I know you won’t be found wanting. On a Thursday morning to have some many people turning out from the community, that speaks for itself.

“The rural aspect provides the funding, the community is the most important part of it. If you don’t have communities working together, with the council and elected representatives, nothing will happen.” he added.

The new addition to Drumlish was welcomed by Cathaoirleach Micheál Carrigy.

He said: “I want to welcome this project and acknowledge the role of Minister Ring and his department in their support of the advancement of infrastructure in Co Longford. Minister Ring has been a very good friend to Longford.

“I want to thank you on behalf of the people of Longford for all of your support over the last number of years. This project is important in the development of our tourism infrastructure within the county, opening up our national amenities and providing greater opportunities for locals.

“It fits in with Ireland’s Hidden Heartlands and is an important element in the infrastructure enhancement and development of the rebel trail throughout North Longford. This project is about providing an opportunity to bring the two ends of the parish together.

Cllr Paraic Brady, who was one of the main overseers of the project, noted that this is only the beginning.

“This is the start of something major for North Longford, not just Drumlish, but also Ballinamuck, Colmcille, Dromard, Granard and Ballinalee. It is a very ambitious project going forward, but this is only one small step.” he said.

“This is the start of something major for north Longford. We are looking forward to what the future holds.”

Cllr Brady praised the local community for pushing ahead with the plans, before thanking landowners.

“I only pushed the project forward. This is the brainchild of a lot of people in the parish, who said they couldn’t access the park and had nowhere safe to cycle and walk. We came up with this plan to link the parishes together.

“I’d like to thank the landowners. Without their help, this simply wouldn’t have happened. They were the key to the whole thing and going forward, they are going to be key to the rest of it.

“It is a decent run/walk and it is safe, which is the most important thing.”

Cllr Turlough McGovern echoed these sentiments, before praising Cllr Brady’s involvement in the project and the generosity of landowners.

He told the Leader: “I must praise the landowners for their generosity and of course Paraic Brady for all of the hard work he put into it, not to mention the Longford regeneration team and Longford county council.

“It is an opening for the rest of us to maybe start up something around Granard to get them out and about walking.”

Also read: Forest and woodland establishment events to be held in Cavan