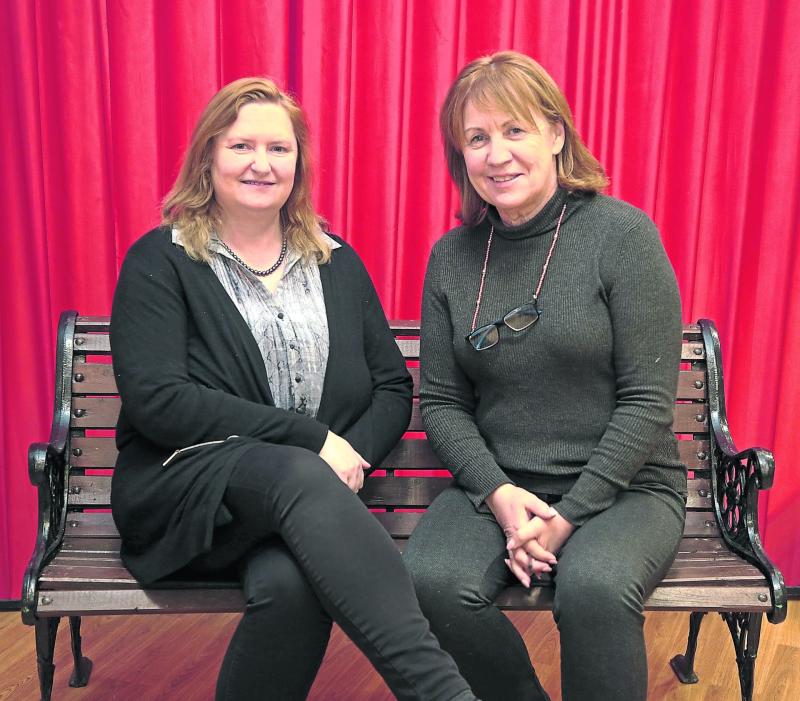 She explained: “I have been here for 27 years, My interviewer for my job all those years ago was Sylvia Dawson, founder of St Christopher’s.

“I had been running my own speech and Drama school and I remember Deirdre Quinn RIP rang me and said ‘Mrs. Dawson wants a word’. You didn’t really say no to Mrs. Dawson!

“ She was a force of nature and ahead of her time. She saw that the creative Arts nourished the soul.”

That couple of hours gradually turned into a full time role as a drama therapist for Evelyn and she hasn't looked back since.

“I suppose it became more streamlined with the appointment of Pauline Davis, our Services Officer.

“I went on then to do a full time degree as a Drama therapist because I knew that the creative arts were not just about performing but creating a safe and nurturing space to work with people.”she continued.

Since Evelyn became involved with St Christopher's, they have successfully showcased the talents of users to all corners of the community, performing on stage at the Backstage theatre, the Abbey theatre and more.

“We have branched out into our community in so many ways. We’ve worked with Backstage Theatre and Mermaid Theatre, Bray, working on a piece called Utopia which was showcased in both venues under the guidance of professional director and Shadowbox founder Gemma Gallagher.” Evelyn said.

“Then Gemma directed another production with the service users from St. Christophers which went on to be performed in the Abbey. World renowned choreographer Michael Keegan Dolan has also worked with us and we have also had filmmaking classes under the guidance of Shane Crossan.”

Service users at st Christopher’s have even graced our television screens in recent times.

“Our service users appeared on TV3 when Triona Maloney, one of our service users, was in a professional production of Castle Rackrant with Cork director Johnny Hanrahan.

“We’ve also been part of local productions with the Longford Variety Show and their director Brian Murray.

“The staff in St. Christopher’s are always fully supportive and I suppose a highlight for me was when our staff put on the pantomime ‘Scrooge’ and raised more money for the Arts within the Service.”

There is excitement building for the team at St Christopher’s and six of their service users, as they prepare to depart for the US in the coming days with a packed schedule of events. The team are heading stateside on the back of a recent fundraiser where local band Brave Giant agreed to perform a free gig in New York to raise much needed funds for the facility.

The travelling contingent includes service users: Triona Maloney, Seamus Gray, Fiona McLoughlin, Rosaleen Maguire, John Reilly and James Baxter, and while in the US, the team at St Christopher’s will partake and host a number of events, including an art exhibition.

Evelyn said: “We would have loved to bring a huge contingent but everything is about logistics, cost, etc.”

She continued: “We will have a live performance of our Mime ‘Charlie Chaplin’ it’s a short mime and will feature the talents of Seamus Gray, Fiona McLoughlin and Triona Maloney.

“We are also showing two short films that we have made, ‘Cottage in the Country’ and ‘Dark Day at Dawson Saloon’, which came 2nd in an International Film Festival hosted by AbleVision in Drogheda. Award winning singer Rosie Maguire, who came first in Irish Performing Arts Festival in Cork, will sing two songs and Triona Maloney will also perform.

“Running along with that we will have our art exhibition which will showcase the artistic talent of other men and women within our service.”

Evelyn says the work carried out by the huge team at St Christopher's to help improve the lives of service users, is down to the ethos instilled by founder Sylvia Dawson.

“I have to say the ethos that Sylvia Dawson espoused is still in evidence today with our board and the management team.” she said.

“The opportunity to bring our work to New York is wonderful and we are all excited and more than a little nervous.

“It's important to have these fundraisers because it gives our service users an opportunity to enjoy the extra curricular activities that are not provided for by the state.”