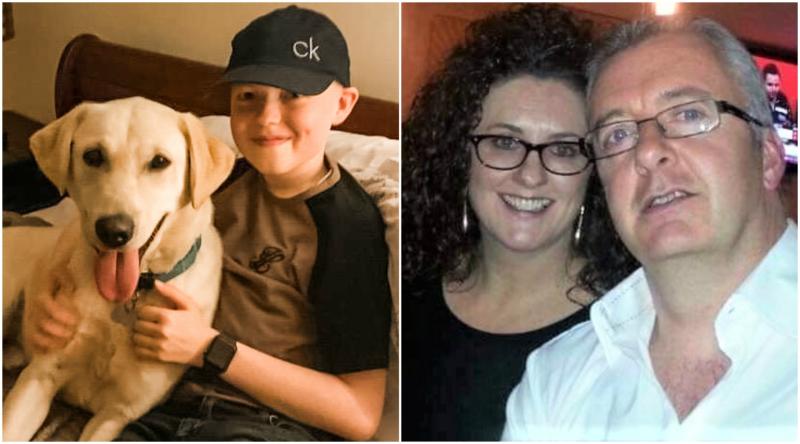 Left: The late Cian Neary and his dog, Cooper. Right: The late Dearbhla and the late Donal Considine

When a child is sick, all anybody wants is to make them feel better and to bring a sense of normality back into their lives, insofar as possible.

That’s how Evelyn and Enda Neary from Killashee felt when their 15-year-old son, Cian, was diagnosed with cancer. Cian, sadly, passed away in September 2019 but, thanks to the close proximity of his dog, Cooper, he had a little bit of what was important in his life by his side until the very end.

“He loved lots and lots of things, but his love of animals was probably the biggest. He got a dog shortly after he was diagnosed and that dog became everything to him.”

It came as no surprise that, when Cian’s parents were trying to make him feel a little bit better, one of the most important things to him was to be able to spend time with Cooper.

“Last summer, Cian went to hospital in June and he never left. We, all the time, were trying to bring as much of home to him as we possibly could. So when you’re 15, what do you want? You want your friends around you, you want your dog,” said Evelyn.

“So we managed, through the support of a lot of people, to get Cooper up to Dublin and he was kennelled there. Cian visited him almost every day until the week before he died. I think his last visit was a Wednesday and he died in the early hours of the Monday morning.

“When people hear he was sick all summer, they think he was in bed sick. He wasn’t. He was very, very active until the end and Cooper was a huge part of that.”

Cooper brought Cian so much joy in his final weeks that his parents decided to set up a charity in his name that would allow other children to have their pets nearby when they were in hospital.

“So our plan is, if you’re there and you live in Cork, we will get your dog or cat up to the hospital. We will make sure that there’s a veterinary check carried out on them and we already have a network of vets willing to work with us.

“We already have arrangements made with boarding kennels in the Dublin area who will take the dogs and cats at night.

“But our plan is to build holding kennels at the new Ronald McDonald House. So we will actually have a place to put the animals when the child is in hospital and the child can just come over to the Ronald MacDonald House - they don’t even have to leave the hospital grounds - and visit their dog.

“Then when the visit is over, we bring them back to the boarding kennels.”

It’s such a simple concept that it’s hard to believe nobody has thought of it before. Pets are a huge part of the family - especially for children and, with an organisation like this on the go, so much joy will be delivered to so many children at some of their most difficult moments.

Like with any charity, fundraising is playing a major part in the setting up of Cian’s Kennels and, local man, Brendan Considine, is putting a huge effort into raising as much money as possible - all in memory of his dearly departed siblings Donal and Dearbhla.

“My brother and sister died in the last 14 months,” Brendan explained.

“I’d always intended to do something and we have previously organised cycles. Malin to Mizen became what we were going to do. We didn't really have much in mind on where that money would go. But then I heard about Cian and Cian's Kennels and we decided that whatever we do is going towards Cian’s Kennels.”

And people have been incredible when it comes to getting behind the cause, he added. Backstage Theatre have donated a huge amount of money raised from the recent Stars in My Eye run, and plenty of local people are pledging their support.

“I want to mention Derek Sheridan who has come on board as one of the main sponsors. He’s giving us three vehicles. He’s driving one of them himself. And a cash donation. He’s just been great,” said Brendan.

“Our biggest problem was logisitcs and getting people from Longford to Malin Head and from Mizen Head back to Longford.

Aidan Brady came in and sponsored the bus. They’re going to collect us and bring us to Malin Head. David Sheridan is shipping the bikes up for us and getting them ready for us. He’s coming back down to pick them up from Mizen Head and we have Carrigy’s bus coming to bring us back up from Mizen.”

The cycle itself will take place in May of this year, starting at Malin Head on May 2 and finishing up on May 7. And the funding will be a huge help to Cian’s Kennels, which Evelyn hopes to launch on April 18 - Cian’s 16th birthday.

“This fundraising is going to be a fantastic start for us. It’s going to mean that we can hit the ground running and start spending this money on what it’s planned for, which is getting this thing up and running as soon as possible.”

Longford Leader gallery: Stars in My Eye 2020 at Backstage Theatre in memory of Dearbhla Considine