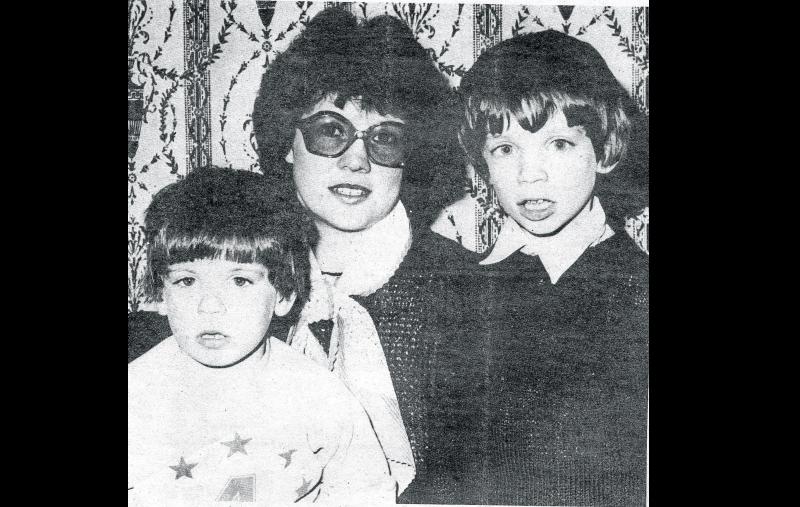 When Laurence James Downey hijacked an Aer Lingus flight in 1981, and demanded that the pope disclose the third secret of Fatima, nobody would ever have thought the bizarre incident would become a hit comedy forty years later.

But that it has and local mother and son, Mary and Ciarán Feeney are eager to attend this weekend’s performance in the Backstage Theatre, where they will relive the experience of the hijacking - albeit in a more lighthearted manner.

Mary and her family were living in England and preparing to move back home to Lanseboro when she and her sons Ciarán (5) and Damien (3) found themselves on the flight that was diverted to Le Touquet airport in France.

The hijacker had demanded the pilot bring him to Teheran in Iran, but lack of feul meant the plane instead landed in France, where it sat in a corner for several hours.

Surprisingly, there was no “pandemonium” on the plane either as passengers remained calm and collected throughout.

“There were four Americans, I can remember. And when they found out that they were going to miss their plane in London, they said ‘let us have a go at him’ and the air hostesses were saying ‘no, no, no, you must be quiet’,” Mary laughed.

“And the air hostesses were saying to me ‘don’t tell your children’. And lucky enough I had brought pencils and stuff to occupy their time - even though it was only 55 minutes or whatever.”

The air hostesses did their best to keep everyone calm, Mary explained, and even tried to convince the hijacker to let women and children off the plane. When he eventually agreed, Mary stood up with her two children only to be told to sit down because “they aren’t babies”.

“They thought he had a detonator in his hand and he had something on his chest and around his neck, hanging, like petrol or something he might set alight,” Mary recalled.

“But then we were told, eventually, that the anti terrorist squad were going to come in and storm the airplane.

“Four of them came in and they told us to put our heads down so we wouldn’t see anything, or in case they had to use teargas. And I can remember them crawling around. And they got into the cockpit then and they overpowered him.”

Longford man and then Minister for Transport Albert Reynolds was flown out to France where he boarded the plane and spoke to the passengers, who were fed and watered in the airport before they were put on flights back to Dublin or Heathrow.

“Tom, my husband, was in Heathrow waiting, but they never actually told them until very late in the night that the plane was gone to France,” Mary said.

“They were wondering what was going on. They were told the plane was diverted. They didn’t tell them it was hijacked until later on.

“So it was two o’clock in the morning when we got back to Heathrow.”

Her son, Ciarán, was only five years old at the time and can, understandably, remember very little of the incident, but there were a few things that stood out in his mind.

“My father was laughing at me saying ‘how would you remember?’ But I remember a fella pushing my head down,” he told the Leader.

“I remember my head being pushed down and the sound of feet and all the photographers taking photographs coming off the plane. And the fourth memory is looking at the food. That’s all I remember,” Ciarán added.

The hijacker’s aim was to have the pope disclose the third secret of Fatima.

“He got this thing into his head. He was obsessed with religion and he wanted to get the third secret,” said Mary, who is looking forward to seeing how director Janet Moran has adapted the incident for the stage.

“I read this piece and I said ‘Oh my god, that was us’, so I rang the girl in the Backstage to get tickets,” said Mary who will be attending the show with Ciarán on Friday night.

There are still a number of tickets available for A Holy Show, which puts a light-hearted spin on the events of 1981.

Read also: A Holy Show to be a laugh-out- loud production at Longford's Backstage Theatre