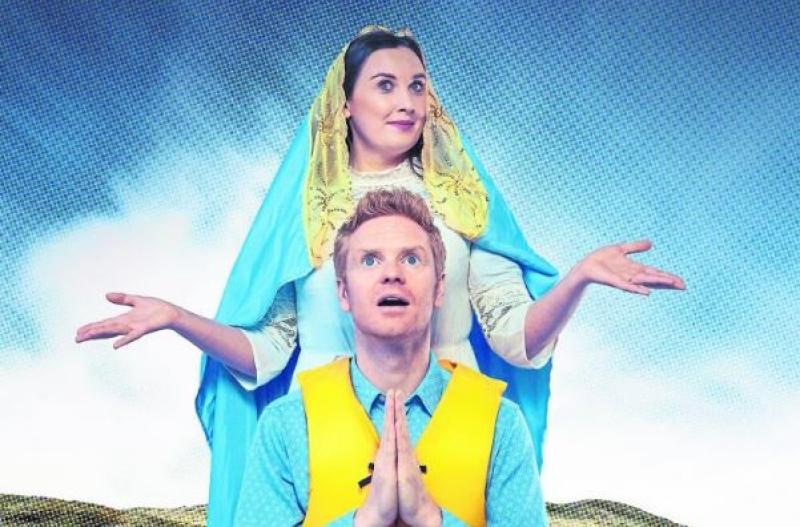 The hilarious hit comedy, A Holy Show, presented by Verdant Productions, is coming to the Backstage Theatre on Friday, February 21, and is guaranteed to be an entertaining production.

Writer and director, Janet Moran, is looking forward to bringing the show to Longford.

“It’s a fast-paced comedy about the real life hijacking of an Aer Lingus plane in 1981 by an ex trappist monk who wanted to force the pope to reveal the third secret of Fatima,” she explained.

“About 10 years ago, I saw an episode of Reeling in the Years, which featured footage from the event. The footage is funny and moving and features Albert Reynolds in the full glare of the international press, struggling to answer the question from a very English reporter in response to a statement about the third secret. ‘What on earth is that?’

“(Audiences can expect) a laugh out loud hour in the company of two of the finest and funniest actors I know in a really physical and theatrical performance that looks at a range of Irish characters and their faith in a compassionate and funny way.”

Janet can’t wait to bring the production to Backstage and, much like any other actor, director or person in showbiz, she’s in love with the local venue.

“Listen, don’t tell the other venues, but the Backstage Theatre is the favourite venue of every actor I know who has toured Ireland,” she said.

“The welcome you get there is like no other. The backstage sandwiches are a particular highlight.”

It’s not the first time we’ve heard that to be honest - we must sample these sandwiches!

Tickets for A Holy Show are on sale via backstage.ie.