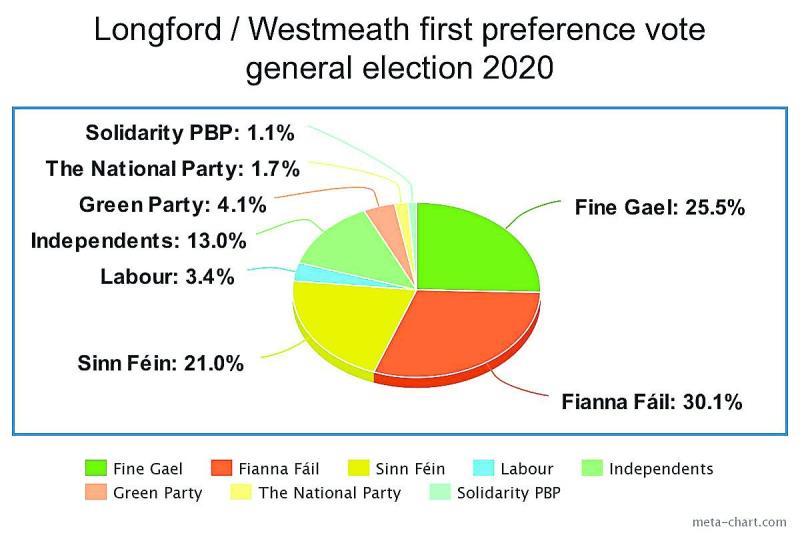 The slogan of Longford’s newest TD, Joe Flaherty, was ‘make Longford matter’ and it is a message that certainly seemed to resonate with the electorate as the Lanesboro native became the second candidate elected to the 33rd Dáil from the Longford/Westmeath constituency.

His triumph, alongside that of outgoing TD Robert Troy, helped Fianna Fáil capture two of the four seats on offer, the first time the party achieved that feat in this constituency since 2007 when Mary O’Rourke and the late Peter Kelly were successfully elected.

Against the backdrop of Sinn Féin’s incredible #GE2020 performance that saw Sorca Clarke comprehensively top the poll, it was a noteworthy double and the highlight of an otherwise disappointing campaign nationally for Micheál Martin’s FF.

It was barnstorming stuff and it was replicated by Mary Lou McDonald’s rejuvenated and buoyant party in constituencies all across the country.

Outgoing Fine Gael TD Peter Burke, who saw his first preference vote increase by 936, rising from 5,681 in 2016 to 6,617, clung on to his seat but there was bitter disappointment for Athlone-based junior minister Kevin ‘Boxer’ Moran who failed to retain his seat, making him one of the highest profile casualties.

His first preference vote from 2016 fell by 856 to 6,730, leaving him dangling precariously on the ropes. And although transfers put the ‘Boxer’ back in the ring with a fighting chance, it was the transfers after Micheál Carrigy’s elimination that ultimately landed the sucker knockout blow.

Indeed, as was illustrated during a highly dramatic tenth and final count at a packed and tension filled John Count McCormack Hall in Athlone IT on Monday evening, when Flaherty trailed ‘Boxer’ by 993 votes; 8,236 to 9,229; the desire of Longford voters to rid themselves of the unwanted ‘forgotten’ tag was very apparent.

After James Bannon (FG) lost his seat four years ago, Longford was the ONLY county in the country without a sitting TD in the 32nd Dáil, and it was the transfer of 2,828 votes from the eliminated Cllr Micheál Carrigy (FG), the current Longford County Council Cathaoirleach, that got Flaherty across the line.

‘Boxer’ benefited to the tune of 794 votes, while Carrigy’s party colleague Burke received 2,709 votes - 119 less than went to Flaherty.

The fact that 40% of Carrigy’s votes remained in Longford suggests that voters in the county gave #1 and #2 votes across party lines.

However, the Ballinalee postmaster and Co Longford Tourism Chairperson, who was first elected to the county council in 2009, and secured 6,334 first preferences did lament the fact that 3,500 votes left Longford and went to SF’s Sorca Clarke.

If a chunk of those votes went to first-time GE candidate Carrigy, then Longford could have been celebrating the election of two TDs this week. Not since 2007, when James Bannon (FG) and the late Peter Kelly (FF), has Longford had two sitting TDs.

It was a very decent outing by Carrigy, who hasn’t ruled out running again, and while Taoiseach Leo Varadkar called the election on Tuesday, January 14, the campaign to elected a TD for Longford more or less began the day after the 2016 general election concluded and it was lengthy, highly competitive and draining.

Carrigy won the Longford FG selection convention vote on June 9, 2017, by a margin of 232-166 over Cllr Paul Ross, leaving him among the first declared candidates.

In contrast, Longford town based Flaherty, the Managing Director of Iconic Newspapers who has been on a sabbatical since the beginning of the year, was officially selected as the Longford FF candidate on September 1, 2017. He defeated 2016 general election candidate Connie Gerety Quinn and Cllr Seamus Butler. Flaherty received 220 votes from delegates at the convention, with Quinn on 87 and Butler on 49.

In December 2017, Flaherty was co-opted onto Longford County Council as Padraig Loughrey stepped down.

Indeed, following his election to the Dáil, it will be interesting to see who fills Flaherty's seat on the local authority.

Robert Troy topped the poll in 2016 with 11,653 votes but his first preference vote dropped by 2,322 to 9,331 this time around, the second highest of the fifteen candidates in the race last Saturday.

His seat was never in jeopardy though and it is his third consecutive successful election, making him the most experienced TD in the constituency and should FF enter government, he’ll be disappointed if a ministerial role eludes him.

Unlike four years ago, when FF’s strategy was fragmented and unclear and they failed to unite behind Connie Gerety Quinn, their vote management worked a treat with a clear message to their supporters - back Troy in Westmeath and Flaherty in Longford. They increased their vote by 1.9%, reaching 30.1%, and this won them half the seats on offer.

First-timer Flaherty polled a hugely impressive 7,666 first preferences and by the time the count ended he was on 11,064 votes.

FG’s vote also rose by 1.7% to 25.5% but it wasn’t sufficient to nick a second seat, with the biggest fall in support from 2016 was suffered by Independents, down from 25.4% to 13% and Labour fell by -5.3% to 3.4% as former Westmeath inter-county footballer Alan ‘Budda’ Mangan was unable to retain the seat that the long serving Willie Penrose held since 1992.

The tallies indicated from an early stage on Sunday that the ‘Boxer’ was on a standing count and before departing the ring he took a swipe at social media trolls that hurled abuse at his family and it is interesting that for the second consecutive general election the issue of online intimidation has reared its ugly head in Longford/Westmeath.

There was a 60% turnout with 56,883 of the 94,835 total electorate coming out to cast their vote despite the horrible weather that Storm Ciara brought with her. There were 500 spoilt votes.

Tallies indicated that 32% of Longford votes crossed the county boundary and went into Westmeath in 2016 and digging deep into the 2020 tallies also reveals that around 29% of votes ‘travelled’ again on this occasion.

Westmeath candidate Clarke picked up approximately 3,500 votes in Longford, with the ‘Boxer’, Louise Heavin (Green Party), Troy and Burke receiving around 1,080, 379, 309 and 293 votes in Longford boxes.

‘It’s time for change’ proclaimed Sinn Féin roadside banners everywhere and with the mandate voters gave the party it will be fascinating to see what change they can implement. From the opposition benches, they’ve never been shy about calling out the government on ‘empty promises’ and ‘failing to deliver’. With the reins of power, how will SF respond? Or could it be a case that we’ll have another general election before the end of the year? Time will tell.

Outside the Longford/Westmeath political bubble: Election success in our neighbouring constituencies