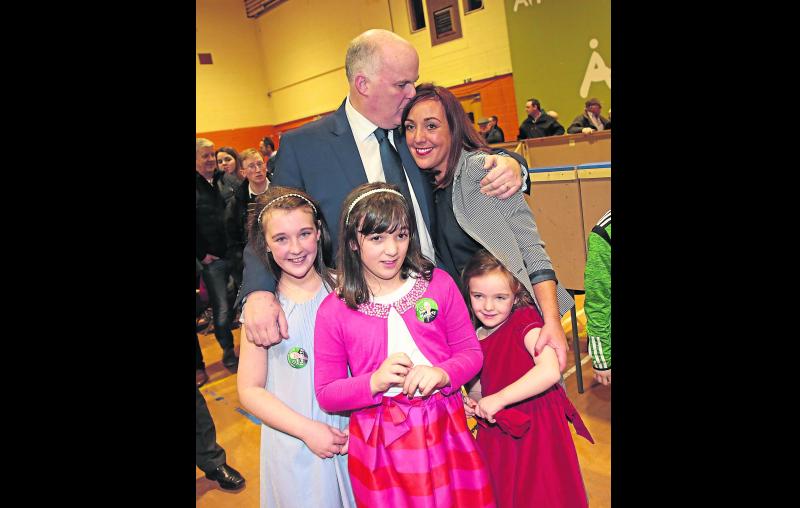 The wrongs of 2016 have finally been put right as Longford returns a TD to Dáil Éireann, writes Jessica Thompson

It’s been a long four years, that’s for sure, but after what the man himself would call “a herculean effort”, the people of Longford really came through for Joe Flaherty.

You could cut through the tension with a knife on Monday night as people milled in and out of the count centre, waiting for the results of the final count to be announced.

It was looking like Robert Troy, Kevin ‘Boxer’ Moran and Peter Burke were in line for the final three seats, but for one last hope: the 6,981 transfers that were up for grabs after Micheál Carrigy’s elimination.

Those votes were to seal the county’s fate for the lifespan of the next government; would they go to Carrigy’s Fine Gael running mate in Westmeath? Or his Fianna Fáil rival in Longford?

As it happened, over 2,800 people who gave Carrigy their first preference had decided to give Flaherty their second. And just like that, Joe Flaherty shot up in the race and claimed the second seat in the Longford/Westmeath constituency. We got our TD.

WATCH | Longford's Joe Flaherty in line for a seat

Roars of delight filled the hall. The air was punched vigorously. Flaherty was hoisted onto the shoulders of his supporters, and the celebrations began.

“We pride ourselves on democracy. It’s a fledgling democracy but it’s an outstanding country and I’m steadfast in my determination to defend the integrity of this country,” Joe Flaherty told the crowd during his closing speech.

But, considering it was the transfers from his Longford rival that got him across the line, he couldn’t but acknowledge his Fine Gael opponent.

“Four years ago, we had a very different story in Longford and we ended up without a TD. Myself and Micheál Carrigy both committed ourselves, steadfast in the belief that we needed to right a wrong of four years ago,” he said.

“Unfortunately, as it transpired for him, there could only be one of us making it across the finish line, but I want to commend Micheál for the campaign he fought. He was clever, clean, honest and a true gentleman to his fingertips.”

There was many a thank you thrown about in the following hours, with the election team, supporters, family, friends and countless others who had some form of involvement in the campaign. But it was the people of Longford who stood out in Joe’s mind as he reflected on the number of votes he received.

“I’m very honoured and very humbled. The people of Longford have shown their faith in me,” he told the Longford Leader as he took a few quiet moments away from the celebrations.

“I’m well aware of the challenges that confront us in Longford. We’ve been neglected for far too long, so it’s a big piece of work to be done.”

He’s had a strong team behind him these past few weeks and considers this not just a win for Fianna Fáil, but a win for the county as a whole.

“A lot of people joined me in my campaign that weren’t of Fianna Fáil DNA. They came, they bought into Joe Flaherty’s vision for Longford and that’s a Lonford of inclusivity, a Longford of positivity, a Longford for all.

“We have a lot of issues and a lot of challenges in Longford and, as I said on every doorstep, the first step to addressing those issues is by getting national representation back and thankfully we’ve achieved that goal.”

But there’s no denying Monday night was a huge win for Fianna Fáil too. This is the first time since 2007 that the constituency has had two Fianna Fáil TDs, with Peter Kelly and Mary O’Rourke taking the helm prior to that.

“I think we had two exceptionally strong candidates and, in particular, I want to pay tribute to Robert Troy,” said Joe of his running mate.

“My success is in no small part due to Robert Troy. Many will be aware he took 1,700 votes out of Longford in the last election. He had very much a hands off approach in terms of this election and he was single-minded in his goal to ensure that Longford did get a TD in this election.”

Former Longford TD, the late Peter Kelly, who sadly passed away in January 2019, may not have been there in person to celebrate, but he was certainly in Joe’s mind as he took in his success.

Now, as the formation of a new government becomes the topic of conversation across the country, there’s only one thing on Joe Flaherty’s mind and that’s ensuring Longford is not neglected.

“Four years ago, we left Kenagh crestfallen. We emerged as the only county in Ireland without a TD. Today, we’ve put that right and now begins a journey of putting right the wrongs of the last number of years and putting Longford back where it deserves to be - at the centre or Ireland; at the centre of the universe. Longford Abú!”

ELECTION COVERAGE: Pick up the 12-page supplement included in this week’s Leader for all of the action from the Longford/Westmeath count centre and to read about Longford’s new TD. #GE20 #Elections #Longford pic.twitter.com/2ytrONj7Ip