I would never rule the Boxer out, says Cllr Joe Flaherty as he reflects on the progress of the count in Longford Westmeath. The Fianna Fail councillor was speaking just before the results of the eighth count in the Athlone Town Centre.

Cllr Flaherty pointed out that Kevin Boxer Moran has been picking up votes throughout the count today and should not be ruled out of contention for a seat.   Cllr Flaherty said that his own focus was on the next three eliminations which he said would determine his political future.

When asked about the prospect of Fianna Fail going into government with Sinn Fein, he said that he believed that the next government should be led by Fianna Fail while he acknowledged the phenomenal success of Sinn Fein in this election

"We can never ignore the electorate," he said adding that "Sinn Fein need to engage with all political parties and they need to come to the table with a clear consensus that they want to form a government."

Cllr Flaherty also spoke of his support for Micheal Martin -"I'm very much a Micheal Martin man....I think he has done sterling service for Ireland," he said.

Just moments after he spoke to longfordleader.ie, the results of the eighth count were announced which saw the elimination of Louise Heavin Green Party and Alan Mangan Labour.  Their votes are currently being distributed with the Westmeath candidates widely anticipated to gain for this.

The full breakdown of the eighth count is: 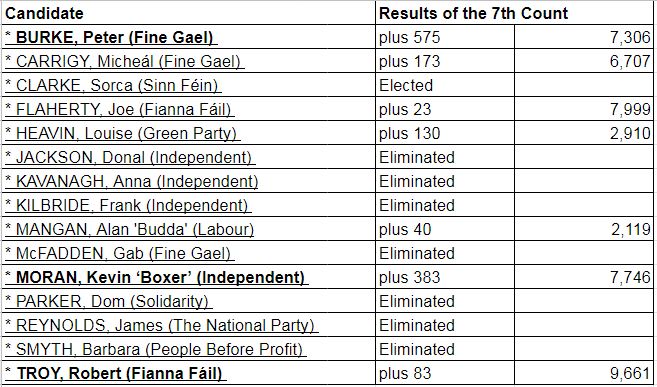