Longford misses out on chance to elect two TDs as surge in Sinn Féin support takes 3,500 votes from county 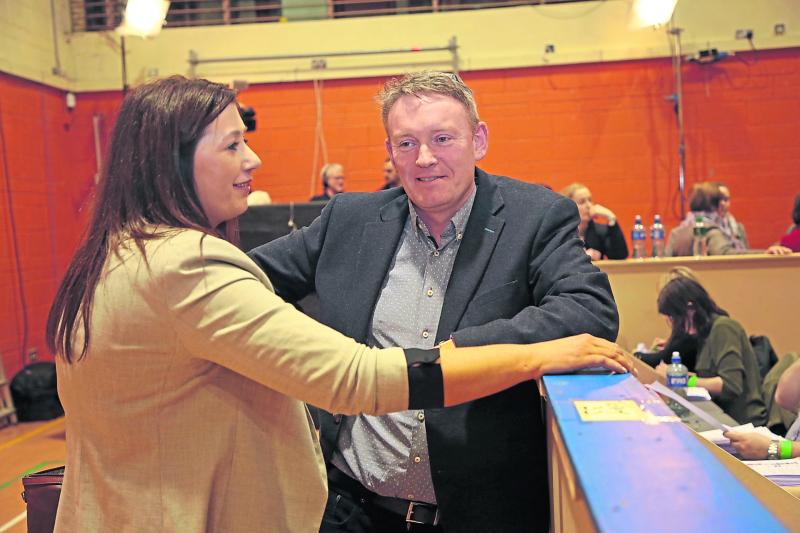 Jessica Thompson examines the effect that a surge in Sinn Féin support had on Fine Gael, with only one FG TD elected

A week is a long time in politics and there’s no telling what could change from one day to the next.

The surge in support for Sinn Féin, for example, seemed to happen so quickly that Sorca Clarke’s election on the first count took a while to sink in. Nobody expected her to top the poll - and certainly not by so much.

That surge in Sinn Féin support among younger people, coupled with the fact that the election was held on a Saturday when more young people would be around to vote, was one of the defining factors for Fine Gael in this election.

“The Sinn Féin tide across the country was what really deprived us of winning that second seat. Three and a half votes left the county for Sinn Féin,” he told the Longford Leader soon after his elimination on Monday night.

“It was disappointing and I think both the main parties, Fine Gael and Fianna Fáil, would have pushed to keep the Longford vote in Longford to maximise the number of seats that we won.

“To be honest, the reality is that if that vote had stayed in Longford, we’d have had two TDs representing Longford in the Dáil.”

Two heads are always better than one and Carrigy held on to the bitter end, only losing his place in the race on the penultimate count, which is a testament to his track record as a politician over the past decade.

“I have a good track record of working over the last number of years - the best track record - and unfortunately I didn’t get the vote,” he told the Leader.

In fact, it was by the grace of transfers from Gab McFadden and Alan 'Budda' Mangan that Fine Gael got a seat in the end.

For a while there, it was looking like Fine Gael’s Peter Burke was going to lose his seat in the Dáil. But on count nine, over a thousand transfers came his way, bumping him up to that fourth seat, with Troy and Boxer Moran looking set to take seats two and three.

It was in that count that Carrigy was eliminated and over 2,700 of his transfers cemented Fine Gael’s seat in the Longford/Westmeath constituency, bumping Burke up above Robert Troy, who had been in the lead for the second seat for the entire count.

“I’m thrilled that my own first preference vote was up significantly on 2016 and indeed on 2011. I’m very grateful to people for supporting me,” Peter Burke told the Longford Leader and, while he commended Sinn Féin’s Sorca Clarke, for her achievement, he was quick to point out that, while she topped the poll and claimed the first seat, she wasn’t the only one enjoying success.

“Obviously, Sorca has put in a huge performance and we have to acknowledge that,” he said.

“But I’m also happy with my performance. I think it’s very important that people got out and voted, which they did in large numbers, and we have to respect that.

“I’m very grateful and honoured with the vote I got. You never say with certainty in counts (what way it will go) because I’ve seen strange things happen.”

Sinn Féin topping the poll can certainly be considered one of those “strange things”, considering the Longford/ Westmeath constituency hasn’t had a Sinn Féin TD since 1957.

“I think in the last couple of weeks in particular, the slogan ‘it’s time for change’ that Sinn Féin rolled out seemed to resonate with the younger generation,” Micheál Carrigy told the Leader.

“They went against Fine Gael in particular as a government party. It wasn’t about personalities, it was about voting for Sinn Féin.

“My one preference would have been that the election take place last November. We would have had a very different outcome. But a week is a long time in politics. You can never judge week to week what will happen,” he added.

While Peter Burke is ready to go forward to the Dáil and continue his hard work for the Longford/Westmeath constituency, Micheál Carrigy is determined to keep working for Longford at a local level.

As Cathaoirleach of Longford County Council, the Ballinalee man has done a stellar job for the county and has no intentions of hanging up his political boots yet.

“The first thing I’m going to do is spend a bit more time with my wife and children,” he said.

“I want to thank Una and my three sons for putting up with me away from home and giving me the opportunity and supporting me in running for the Dáil. Any person who puts themselves forward for political life like that, there are a lot of sacrifices made at home.