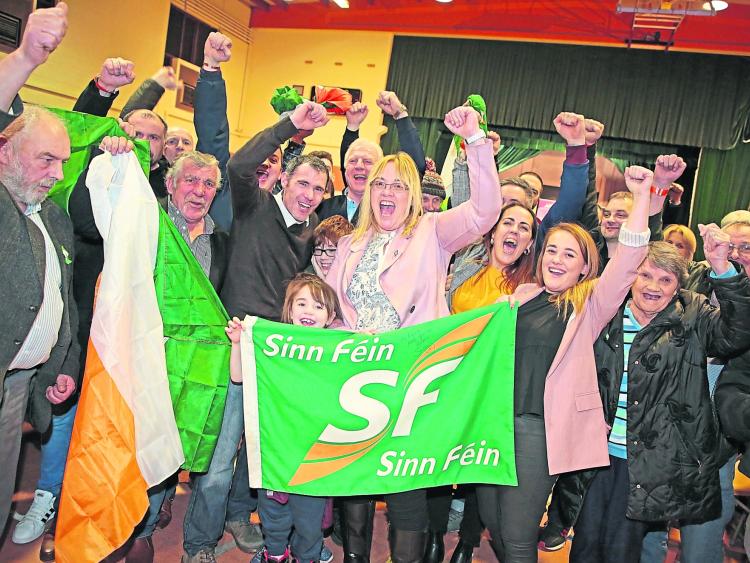 The general election for the 33rd Dáil sprung many a surprise, no more so than in the Longford/Westmeath constituency as Sinn Féin’s Sorca Clarke topped the poll in spectacular fashion

Ms Clarke declared ‘the people have spoken’ upon the revelation that she had topped the poll in the whole constituency and subsequently was elected on the first count.

She has become the first Sinn Féin TD to gain election in Longford/Westmeath since Ruairí O’Bradaigh in 1957, the former president of Sinn Féin who was elected as a TD while a prisoner, winning 14.1% of the votes or 5,506 in total.

In 1921, during the election to the second ever Dáil, Sinn Féin successfully managed to have four candidates elected in the Longford constituency, Lorcan Robbins, Sean Mac Eoin, Joseph McGuinness and Laurence Ginnell, while in 1981 Anti H Block candidate managed to gain 4,573 votes without being elected.

However, never has a Sinn Féin candidate performed as remarkably well as Ms Clarke. Out of a total electorate containing 56,883, Ms Clarke exceeded the quota of 11,277 votes on the first count, as she received a total of 11,848 votes.

Though she capitalised on the Sinn Féin surge sweeping the country, Ms Clarke is also thought to have gained votes from the party’s previous general election candidate in 2016, Paul Hogan, a four time candidate who narrowly missed the cut in 2016 and has since left the party.

Mullingar based Sorca Clarke, wife to Darren and mother of four children, splits her time between life as an accountant and a carer. A long-term member of Sinn Féin, Sorca became involved in politics early on and this, in turn, led to her successfully contesting the Westmeath local elections in 2014.

After then losing her seat in the 2019 elections with a total of 500 votes, one of a number of Sinn Féin candidates in contention just seven months ago who lost their council seats, Sorca decided to run in the general election because she felt there was a strong need for political change.

According to tallies, Ms Clarke polled very well in not only Westmeath, but also Longford and when speaking to the Leader,she refuted talk of a Westmeath Longford divide in light of her strong showing on both sides.

She said: “I don’t buy into this Longford versus Westmeath ideology.

“This constituency is one constituency. The vote of one person in Longford is as valid to me as the vote of a person from Westmeath.

“What it really boils down to is policies and what policies will make a difference to people’s lives.”

Ms Clarke says the nationwide Sinn Féin surge witnessed in the ballots is down to the manifesto they aim to deliver.

“They looked at our manifesto, they related it back to their own lives and that is what has come out in the ballot boxes.”

Upon her election, Clarke vowed to deliver on a number of health issues and thanked voters for their trust in her.

“I just want to say thank you and a genuine thank you to the people of Longford and Westmeath for putting their faith in me.

“I am not under any illusions here. They put their faith in me and I am going to make sure that nobody ever feels that they are unheard of or not represented in Leinster House ever again.”

Though she wasn’t present to deliver her closing speech on Monday night, Sorca pledged to work hard for all constituents.

“I will work as equally for urban areas as I will for rural areas. Every person in Longford/Westmeath are essentially my bosses.

“One man said to me he was sick of the politics of excuses, and I can think of no better way of explaining the feeling that is out there among the electorate at this moment.

“They don’t want excuses. They want action and they want to be heard. They want their needs to be at the centre of the next government.”