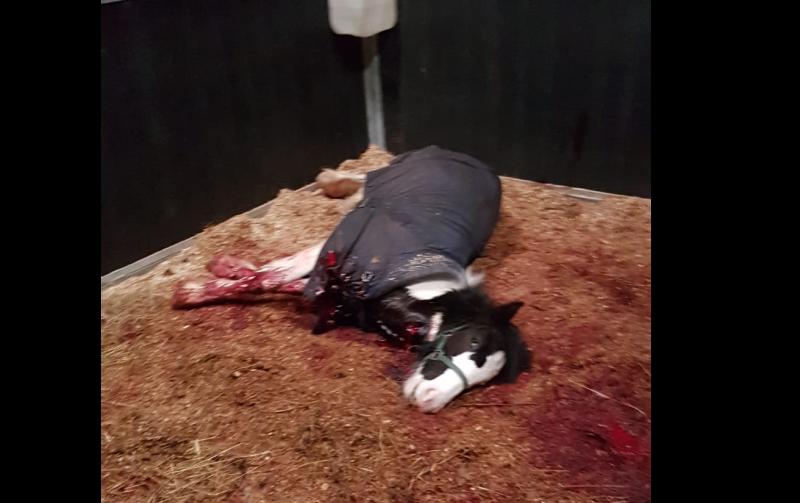 Gardaí are currently investigating the vicious stabbing of a foal, which was housed in a yard belonging to local charity Hungry Horse Outside on the outskirts of Longford town.

The foal, which was owned by 13-year-old Anthony Donohue, was less than a year old when it was violently stabbed in the neck some time on Wednesday night last week.

Any speculation that the incident was feud-related was quickly shot down by the boy’s father, Robert Donohue, who has been volunteering with Hungry Horse Outside for seven years, and who housed the foal in the yard with all the other horses under his care.

“I know there are a number of feuds but I’m not involved in any of them,” Mr Donohue told the Longford Leader.

“This was completely unprovoked and there would be no reason for anyone to do this.”

The foal was found with a piece of the knife used to brutally stab the animal to death still lodged within its throat.

“We’re hoping there’ll be fingerprints on the knife and that the guards will find who did this. But there was no reason to do this,” said Mr Donohue.

It was Mr Donohue and his 13-year-old son, Anthony, who came upon the gruesome scene last Thursday afternoon when they were doing a routine check of the stables.

“I’ve been volunteering with Hungry Horse Outside for seven years, cleaning stables and feeding horses and nursing them back to health,” said Mr Donohue.

Read also: Over 30 horses and donkeys dumped at Leitrim forest

“I went to feed the foal (before the attack) with my son and nephew and there were other animals in the stables that they (the attackers) didn’t touch.

“I went in the next day to see the foal lying in a pool of his own blood. It was a shock. And the worst thing was my son was with me and he saw it too. He’s very upset over it. He’s off school today. He’s not sleeping. He’s traumatised.”

The incident has received national media attention and people across the country have expressed their shock and disgust at the brutality of the act.

To the fore of that was Hilary Robinson of Hungry Horse Outside, who first reported the incident to the Longford Leader on Thursday of last week.

"This is horrible stuff. It's really gory," she told the Leader.

“It’s a terrible thing to do to an innocent foal. The foal’s not a year old. It had to be pre-planned. All the gates are locked. Everything is locked, barred and bolted. They had to climb in, go in and literally, physically wrestle the foal to the ground to stab it.”

Gardaí and forensic teams were on the scene last Thursday afternoon and blood tests were carried out to determine whether or not the horse was sedated before its throat was violently slashed.

Investigating gardaí are appealing to anyone who may have information to contact them at Longford Garda Station on 043 33 50570.